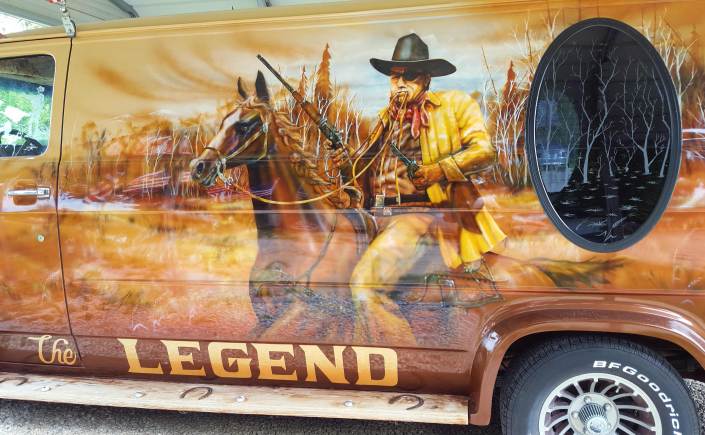 Another Friday off, what to do.  We sat around most of the morning enjoying a lazy day.  Finally we decided to head to Winterset Iowa, which is less than a hour south west.  Years ago as I have said before, Rich’s dad use to live down by Indianola, Winterset and New Virginia.  So their is of course a lot of curiosity about this area.  This was back in the late 70’s.  Also around Winterset their are 6 covered bridges that are scattered through the countryside, 5 of which are on the National Historic Landmark Register.   One of the bridges was were the film “Bridges of Madison County” was filmed.  This was a romantic drama filmed based on the novel by Robert James Waller.  Clint Eastwood and Meryl Streep starred and Clint Eastwood was producer/director.  Meryl Streep won an Academy Award for Best Actress in 1996.

So around 2 pm. we left the park heading to Winterset. We drove to Winterset and found the town square.  In the center of the square was the Courthouse as Winterset is the County seat of Madison County. It was surrounded by quaint small town shops, restaurant’s, antique, and many specialty stores.  We found the Chamber of Commerce and I went in.  As usual the Chamber of Commerce was full of pamphlets and info.  They had maps and info of the bridges, and many other so interesting things to do.   But I was so shocked to find out

It was getting late, so we decided to go to the Museum and Birthplace of John Wayne and forego the bridges.  Only 2 blocks away we found the Museum on John Wayne Drive. 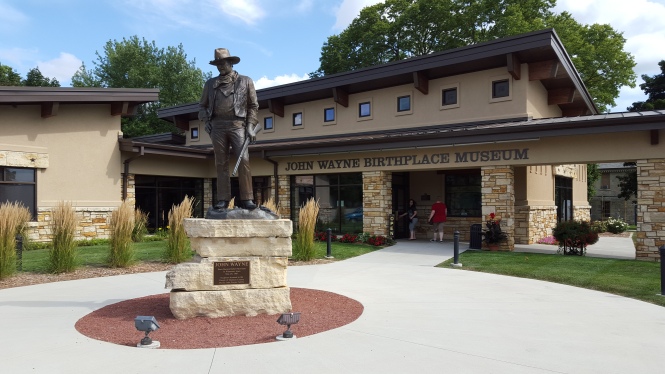 It was a very modern building with his statue out front.  It was built and dedicated in 1982 after his death from stomach cancer.  We went in and bought our tickets.  As it was getting late, they told us to go around the block to the opposite corner and tour the house in which he was born first.  So off we went.

His birthplace was only a 4 room house.  We were told it was built in the late 1800’s and it only had 2 owners and 6 renters at the time it was purchased for the museum.  John Wayne was born in this house on May 26, 1907.  He was the first born of Clyde and Mary Morrison.  He was 13 lbs at birth.  His successful birth was credited to a lady, Dr Jessie Smith, a physician that lived down the street.  He was named Marion Robert Morrison.  Several years later his brother was born and they decided to call his brother Robert and changed his middle name to Mitchell.  His father was a pharmacist and they moved to California as a family member had some acreage.  He tried to grow corn as he was use to Iowa, but it didn’t grow.  After a time he returned to his profession of a pharmacist.

As John grew he also had a dog named Duke.  After a while everyone called them “ Little Duke and Big Duke”.   Hence that is how he earned his nickname “The Duke”.

This house still had the original woodwork, floors, and stain glass door and front window.  Everything else was period furniture from donations.  The guide gave us much of the info.  The woodwork was beautiful as well as the stain glass.

It was a very tiny house of only 4 rooms, consisting of kitchen, 2 sitting rooms, of which 1 might have been a dinning room and 1 bedroom.  Many original family photos were on the walls. They only lived here until he was 3. The family then moved and eventually moved to California.  We left to go back to the museum and passed this Awesome van. 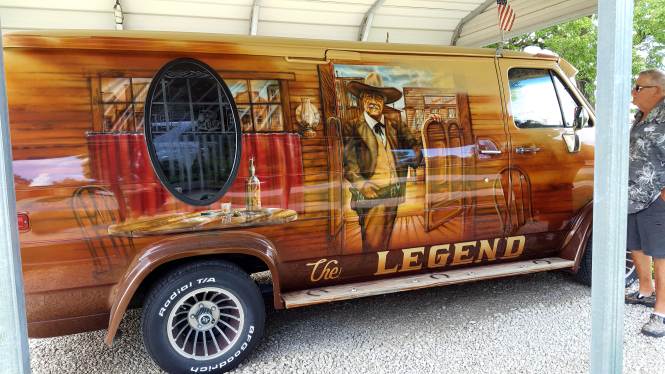 This is a 1980  Chevy Van, customized by a true John Wayne fan.  The poster in the drivers seat said their was over $50,000 worth of murals, even in the door jambs and under the hood.  The side and rear windows are custom etched murals.  The interior is all custom. 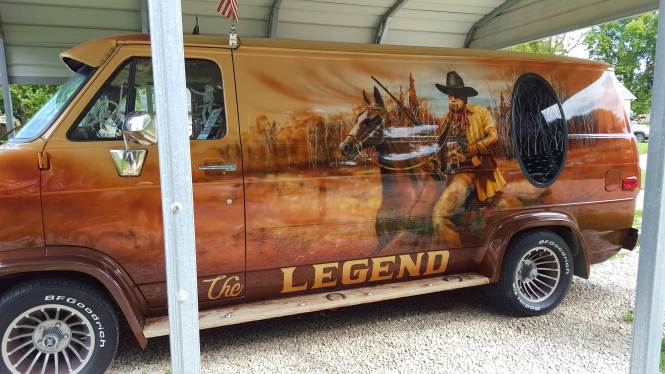 It is a Constant Trophy Winner. 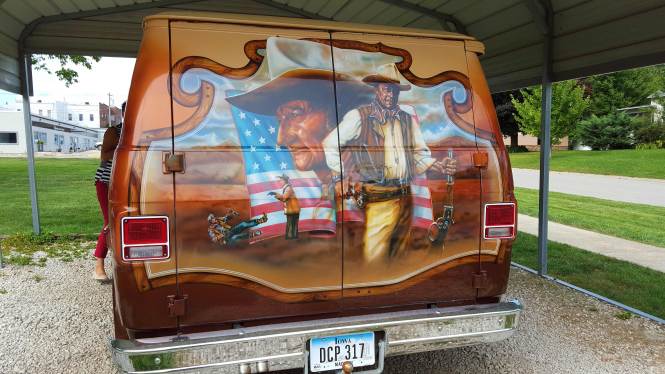 It is a crowd favorite wherever it goes.  It receives many requests from show promoters for it to appear in their shows.

Now into the museum we went.  Amazed at all the mementos and letters.

John sent to Madison County for his Birth Records in 1953.  If you can zoom this, it is interesting to read.

A letter from Bob Hope.  A personally written letter from Lucille Ball, also letters from Kirk Douglas, James Stewart, and  Ronald Reagan as President.  His birth certificate and a Graduation diploma.  So many interesting letters and photos on the wall.  I read many of them and it was like reliving history.  So many of these stars are now passed also.

He did many movies with Maureen O’Hara.  She sent a wonderful 2 page letter after he passed for the Museum.  Most of all these letters were written for the purpose of the opening of the Museum in 1982.

These 2 pictures are of Maureen O’Hara at the Museum.  In picture #6, the blonde is John Wayne’s daughter Aissa.  Picture #7 was Maureen in 2013 attending a dinner in Winterset.  She passed away last year.  The blouse and jacket she is wearing is in a case on display.

Some uniforms from his movies, Hellfighters, The Green Berets, Big Jim McLain, Hatari, and Legend of the Lost.  Also I have pictures of his some of his gun collections, and a station wagon car that he had custom work done as he was so tall.  These were just a few of the many things we seen.  They also had a nice gift shop filled with many things including his movies.  We did miss a short movie presentation of his life in the video room.  But we know we will be going back, so we’ll see it next time.

As we left, I noticed around the sidewalk, their were marble plaques of each movie he stared in.

So many movies that it wrapped around the corner from one property line to another.  After we vowed we would be back, we decided to look up the City Park in town.  Their was one covered bridge their as well as a look out tower.  We found the park and right after the entrance, the Bridge was on the right. 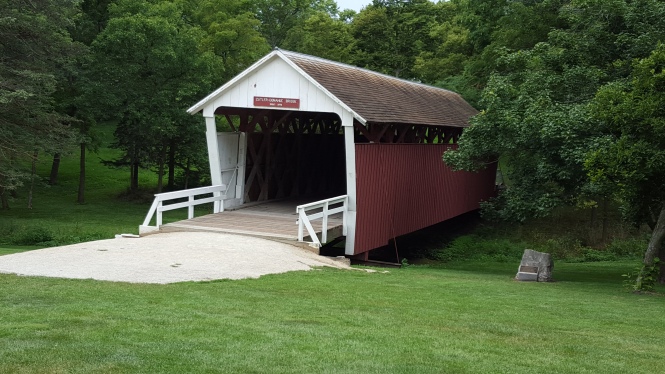 This 79 ft. bridge was built by Eli Cox in 1870 or 1871 with a pitched roof, and a Town Lattice truss design.  It was put together with wooden tree nails with iron bolts added later.  It was decided to move the bridge in town for protection on its 100’th Birthday and also the year of the first Covered Bridge Festival in 1970.  The new site was in the city park over a ravine near the entrance.  Next we were looking for a tower in the park.  In the pictures it looks like a castle.  We followed the signs in the park.  The road turned into a one lane with many turns nestled in the woods with hills on both sides.  Their were signs warning only to be used for hiking and compact vehicles.

We curved and drove over several one lane bridges through the  thick woods.  Finally after what seemed an eternity, but was only a mile and a half, the Tower came into view out of the trees.

It was so impressive at first sight.  It looked like the Tower of a Medieval Castle nestled in the trees.  On the front is a plaque…..”ERECTED IN MEMORY OF CALEB AND RUTH CLARK….PIONEER SETTLERS OF MADISON COUNTY……1846-1926″

The stone work was so impressive and so so old.  It actually had 3 levels.  The ground floor had a stone floor, but very uneven.

We carefully and slowly climbed the stone stairs.  Definitely weathered with age, but still felt secure and solid.  Onward to 2nd level.

Their was a heavy metal stairway to the lookout tower.  It was actually very sturdy.  Up we went to the top.

What a beautiful view.  The sun was not in a good position to get a very good distance view with the camera.  It was approaching sunset.  But you could see several miles as you were on the top of a small hill.  We wondered what the history was of this tower and why it was ever built.  After trying to devour and take in  everything we seen, and wonder about the tower, we walked carefully back down the stone steps.  We drove slowly back through the park to the exit.  It is really a nice park.  It has many pavilions, picnic and kids play areas.  Just full of trees and grass.  On the edge it has a trailer park for camping.  The prices were even very reasonable. We decided to head back to Des Moines for supper.  A storm was coming.  We ate at Bonanza Steak house and beat the storm home just in time.

So very intrigued by the castle I researched what I could find.  Really not much.  Caleb and Ruth Clark were the first settlers of Madison County.  They had 13 children although they did not all survive childhood.  Caleb died at 86 years of age in 1894, and Ruth died in 1901 at 82 years old.  One of their sons, Joshua was a stone mason like his father Caleb.  He cut the stones for the steps before his death in 1915.  In 1926, 4 of their grandchildren constructed the 25 ft. limestone Medieval Castle in their grandparents memory.  As to the connection to the castle like appearance, I couldn’t find anything.  I did find a family member that mentioned that she thought that was were they said they use to watch for Indians.  But she wasn’t sure.   The Clarks are buried in Winterset as well as many family descendants. The end of another wonderful Friday of exploring.  Never dreamed their would be so much history in one county.  The Bridges of Madison County will wait for another day.

Work at the park on Saturday and Sunday.  Then …………..5 days off…………Everyone is ready……Iowa State Fair winds up this weekend so school begins here this coming week.  We will be staying till the end of September working only weekends.  We have also decided to work the 2nd Annual Octoberfest on Oct. 1.  I guess its a really riot.  You must be 21 to attend.  Lots of Alcohol and games…..fun….fun….