March 14, 2020 was the first recorded death in the Coronavirus Pandemic in New York. Since then, which is less than 2 months, they have recorded over 20,000 deaths. The daily death count had spiked in early April to over 800 a day. Now it has lowered to an average of 260 a day. In 2017 the average deaths in NYC were 149. Daily hospitalizations went from 3,181 in April down to around 600 a day, much better but still too many. So many people flooding the hospitals. So many people dying. Where Do they put them all. The funerals homes were called. They were at capacity. They rented reefer trailers to keep the bodies in. Fema deployed 85 reefer trailers to the city. Many hospitals had reefer units in their parking lots. An embalmed body will last at least 2 weeks without decomposing. A refrigerated body, a couple of months. But generally in the normal world, that never happens. A body is usually buried or cremated with in 3 days. But now family’s were becoming desperate. They only had a 2 week window to take care of their family member. How could they take care of the overload…..The Crematoriums were overloaded also. Their are only 4 in the City, 2 in Queens, 1 in The Bronx, and 1 in Brooklyn. They can only process 20 a day. The government gave them permission to process the bodies 24 hours of the day, but still that doesn’t even begin to take care of them all.

The other problem was many of the dead were not claimed. Because of the virus, once you entered the hospital, nobody was allowed to visit. Many died alone without the family or had no idea their loved one died. Many HAD NO family. The families had 2 weeks to claim the bodies before something had to be done. So what was the answer….

Hart Island is about 1 mile long by .33 wide. It is located on the western edge of Long Island Sound, and north east of The Bronx. New York City actually contains 36-42 islands. We know some of them, Manhattan Island, Staten Island, and Long Island are the big ones. The others we know are Coney Island, Ellis Island, Rikers Island. Of course we all know Rikers, from Law and Order….It is the home of NYC’s Jail Complex. Hart Island is the burial grounds for over one million people. These are people not claimed by their relatives and the poor and homeless. Some people choose to be buried their because of the cost. Also the people who died of diseases that needed a mass burial site. Many children and stillborn are buried their, as well as dismembered body parts.

In 1864, the first public use for the island was the training ground for the US Colored Troops. Since then it was used for many things. Union Civil War Prison Camp, Jail, Homeless shelter, Boys Reformatory, Drug Rehabilitation Center, Psychiatric Institution, Tuberculosis’s Sanatorium, and a Potters Field for mass burials. The buildings were abandoned in 1977 and then became the city’s Potters field, run by the NYC Dept. of Corrections. In the fall of 2019 it was transferred to NYC Dept of Parks and Recreation. The Island is isolated from the rest of the city, with no electricity and is only accessible by Ferry Boat from City Island. Burials are performed by the Inmates of Rikers.

As many of us seen on TV, Hart Island became the temporary burial place of the Coronavirus Pandemic, when the Funeral Homes capacity was overwhelmed and body’s were unclaimed. These burials began in late March of 2020. In April the DOC inmates were replaced with hired private contractors to do the mass burials. The trenches were dug, and burials began as drones hovered over and took pictures. Adults are placed in pine boxes according to size and are stacked in sections of 150, measuring three coffins deep in two rows. Theirs seven sizes of coffins ranging from 1-7 feet long. Each box is labeled with and ID number, the persons age, ethnicity, and the place where the body was found or picked up. The numbers of burials increased from 25 a week to 120. They increased the burials from one day to five days a week. 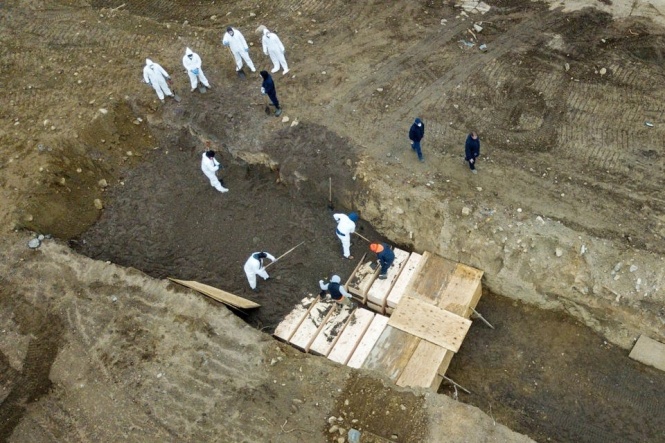 The city is hoping that after the Pandemic calms down that families will want to claim their relative. They can be disinterred with the city picking up the costs. The reburial will be the cost for the family to pay. Their is lots of paperwork to file, then the Funeral Home has to come to pick up the body for the new burial. So their fore many will probably leave their loved one on Hart Island because of the cost.

Hart Island is a seven minute Ferry ride from City Island. It was closed off to the public till 2012. Now families or individuals can request permission to come and visit a grave. You may be escorted to the white painted concrete markers at each plot, or at a gazebo looking out at the field. They say it may all change next year (2021) when the City Parks take’s over management from the Dept of Corrections. 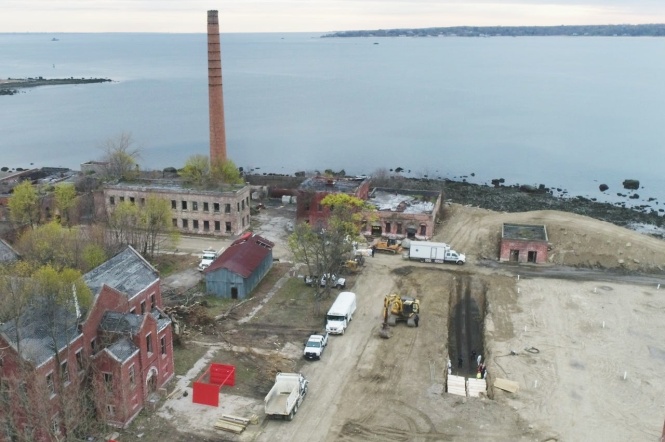 The Island is a very Peaceful place. The buildings are crumbling from the past. Some are torn down as they need more burial ground. It is full of wildlife and is a bird sanctuary. Maybe when the Parks Dept takes over they will make it a peaceful, beautiful island to visit and feel the spirt of the million people who are buried underneath. It is a very spiritual place. We need to remember these people all had a place in life at one time. They were children, with moms and dads, they all grew up to have a space in life…..A purpose to live…..Many were productive citizens…..And then they passed…..and were forgotten in a Mass Burial on Hart Island…..

Their is so much to read about this island. Its past, the people who are buried. A few had been famous in their younger years and became penniless. The different chapters of this island when the buildings were in use. It is worth the time to search out the history of Hart Island, as well as many of the other 42 islands located in NYC.

The City Of New York…..Potters Field

My Child.….Peace I leave to you….My peace I give to you

The Almighty….Has his own purposes

He must have loved them…He made so many of them

Cry not for us….For we are with the father

We are at peace