Last nite we had our first Halloween Party in many years at Eastgate.  One of the residents Paulette and her husband Steve, love Halloween.  Its their favorite holiday.  So we started planning.  Actually Paulette did it all.  And what a Fantastic Party it was. 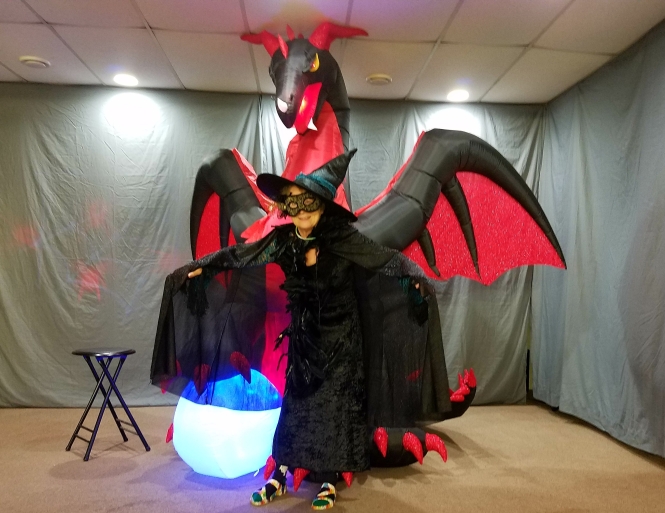 She bought a Dragon blow up and named her Hildegard….lol…Hildegard even flapped her wings.  Everyone took their picture by her.  If you notice, Steve even hung gray sheets behind to cover up the walls.  It was so cool.  We played Halloween back ground music.

The first game we played was Apple Bobbing…..We had maybe 4 people who tried this.  I’m sure they were afraid they would lose their teeth…..Tim tried and tried, but couldn’t get one.

Next Nancy tried.  She tried several times and finally she stuck her whole head down in the water and sunk her teeth into it at the bottom.  Ohhhhh My Goodness….so so funny.   She came out dripping….Look how deep the water is…. 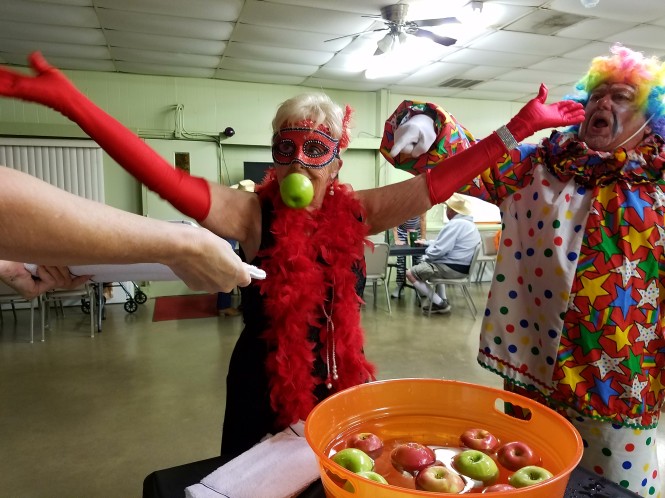 Now along came Pat, she gently lined up her apple that had a nice stem on it.  She tried several times and finally got it….Hurrrrrayyyy….Finally our Unicorn (Paulette) tried, but to no avail.  She couldn’t either….I think her horn was in the way…..

Next we had Chicken Soup game…..Their was 3 little rubber chickens that fit on your finger like a sling shot.  You shoot it into the soup bucket to win……Its crazy how they made a simple game so funny…..

You now how those dirty ole men talk, all about sticking their finger in the chickens hole???…..I’ll let your imagination work for you……lol…

Then we had a costume contest.  Now unfortunately I didn’t get any pictures of the winners, as we were trying to figure out who they were through popular vote of hand clapping…..We ended up with 4 ladies and 4 men for the winners.  The Winning lady was Princess Trailer Trash.  She wore a stunning Tiara and a beautiful styled white trash bag……The Winning man was a Blind man who dressed himself…..Totally clashing colors and a huge funny tie, and sun glasses and beach hat……So so funny…..Now the next thing was the Pumpkin Pinata.

It was filled full of Adult Goodies…..little liquor bottles….beads, glow in the dark bracelet’s, and other toys. 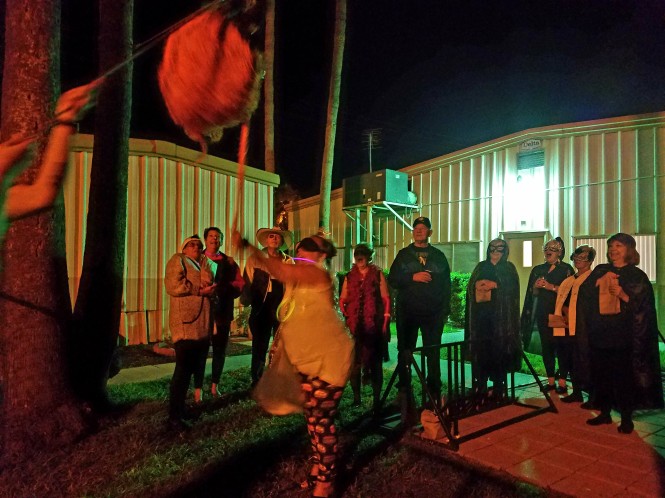 Everyone had to go outside.  Steve had strung a rope between 2 Palm Trees.  He constructed the Pinata so it could go up and down and side ways with him pulling it around. 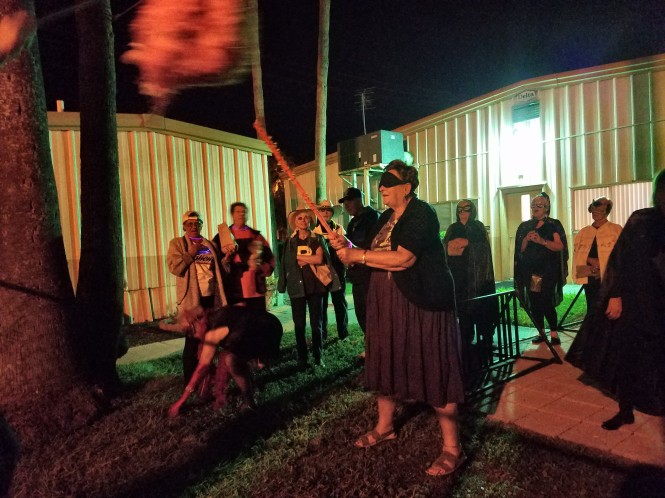 You should have heard them all screaming like little kids.  They swung and swung….The Pinata flew…..up and down……from one side….to the other side….at least once they would get a direct hit….. Everyone kept yelling at them….”Swing to the left….No Swing to the right”….They just kept laughing and giggling….

Then candy would start falling out……out came beads….and of course then the little alcohol bottles started tumbling out.  They were like little kids…They were screaming, “OH this is so much fun…I feel like a kid”…..We gave them little lunch bags for their goodies.  They were all over the ground looking for it in the dark.  They were all unruly children.  They wouldn’t even wait till a person was done.  As soon as something would fall out, somebody would dive to the ground to get it.  I really thought someone was going to get hit….

Finally the Pinata was over and we all went back in.  During this time everyone was also eating snacks.  We all brought snacks to share.  Their was plenty.  Crackers and dips, finger foods, sausage and crackers, and Veggies.  Paulette supplyed plenty of candy.  Little Smore kits, and little Cotton Candy bags, with a black plastic spider in it.  So much food and candy.  So what to drink?  Well you could by soda,   or just BYOB…..and they did….We do have the wine, beer and alcohol drinkers in the park.  But it is only Social Drinking….It makes them all Happy.…..and that’s they way we like them…..HAPPY…. 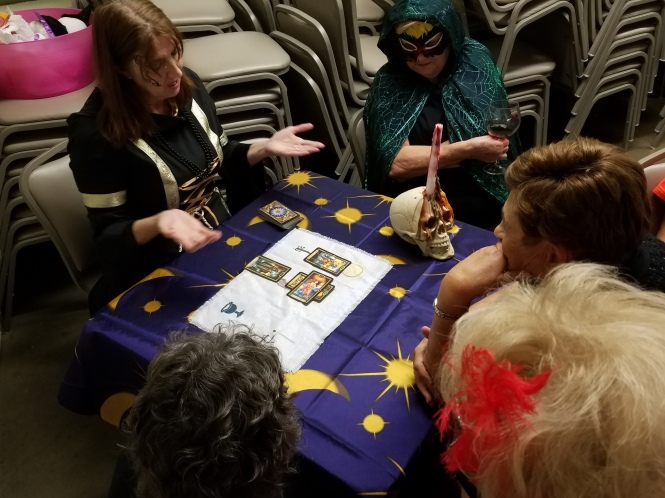 We also had one other guest with us….Esmeralda, (Paulette) came to do Tarot card Readings…..

She really became popular.  Everyone wanted their fortune told.  Even Prisoner Ben, as I think he was worried about being sent back to prison….lol..

Then Pat our Flapper girl, was really enjoying it.  But their was one couple that came in cute as can be……

Our Clowns Marge and Gary…..Now they are the Temporary Park Managers…

How cute are they!!!!…..But unfortunately…..Clown Gary was getting himself in trouble…..

I don’t know what he was doing here,   but I think he was assaulting the Prisoner Ben…..You just never know what to expect with these 55+ parks…..Then Later these pictures showed up on Face Book……  The Clowns are in Trouble….The Cops are Here!!!!

What on earth is Happening?????  The cops have Clown Gary spread eagle against the cop car…..Clown Marge looks like she’s saying  “Help, We didn’t do anything”……

Well, it turned out.  We had a break in at the park.  Marge and Gary were dressed for the party when the cops came.  As Temporary Managers, they had to go over to the trailer when the cops came, as the tenant wasn’t there.  Can you imagine what the cops thought when those 2 showed up on a golf cart????…..

I bet they couldn’t stop laughing….I’m sure they had stories to tell back at the station……Those Old people sure have fun…..Or those Old People,  their all crazy??? 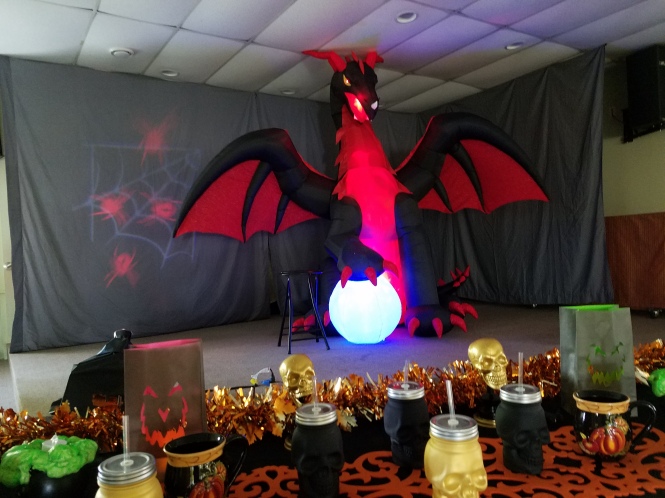 Never the less, it was a Great Party,  Lots of Fun, Lots of Prizes, and Lots of Candy……