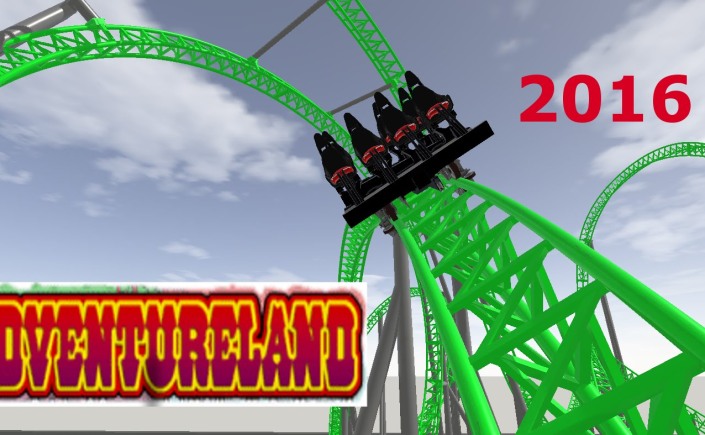 We have arrived at Altoona Iowa to work our Summer Job at “Adventureland”.  It is a really cool amusement park.  I subscribed to an Emailed newsletter couple of years ago.  It is called “Workers on Wheels”.   It is emailed once or twice a week and is full of tips and jobs for workamping.  Last December I was reading it, and this job was posted.  It was close to home,  only 4 hours, free campground, and hourly pay with bonus at the end of the season…..Why Not….Filled out the app online that nite.  The next morning my phone rang.  It was Gary from HR.  We completed a 2 hour phone interview that afternoon, and with in several days all paperwork was mailed back and forth……..Now the fun begins…….We were able to pick our own areas.  I chose Games, and Rich chose Rides.  Now tell me, Who has never as a kid, had a dream to work in an Amusement park……

We arrived last week to settle in.  Were trying to learn the routine, but as most places go, their is some confusion, but were all working through it.  It has only been open on weekends this month, so we asked to take a walk through last Sunday as we have never been in the park before.  So here is some of the things we seen. 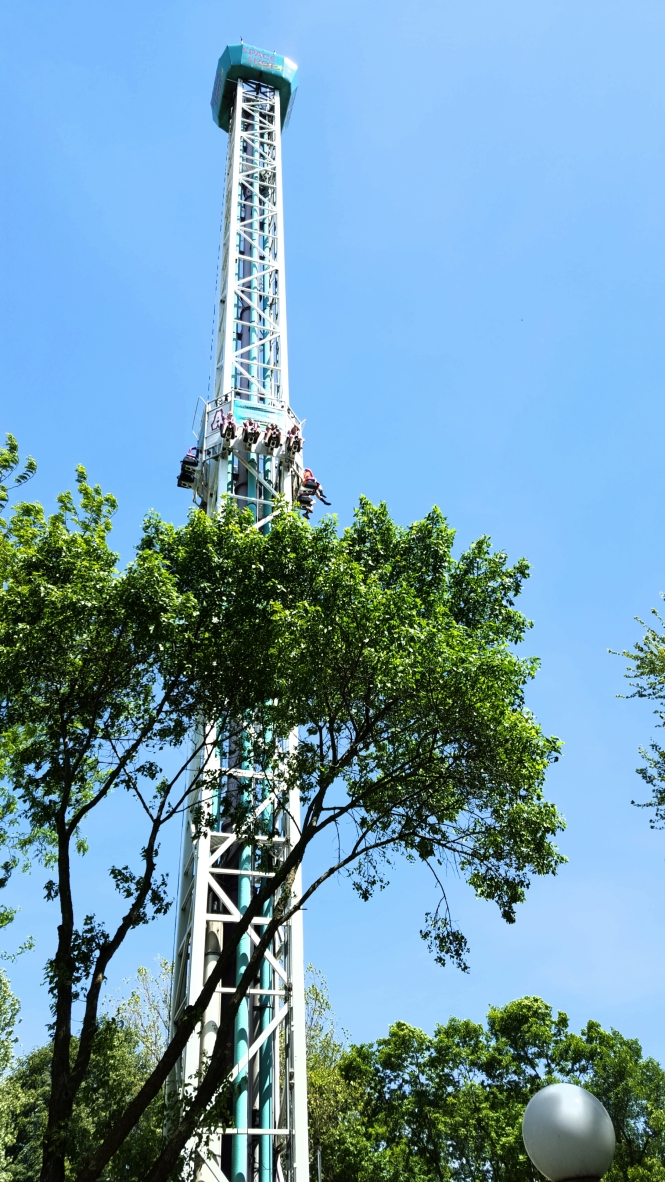 This is the Space Shot…..Not for me…..lol.   The Space Shot is a 235-foot (72 m) structure that towers over Adventureland launching riders up at 4.5 G’s and ending with a free fall of negative 1 G. 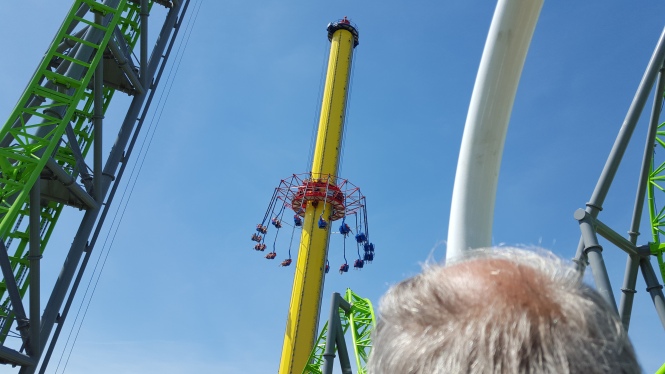 Storm Chaser……OMG…….way to high….  The Storm Chaser is a giant swing ride that takes you 260 feet off the ground and spins those brave enough to ride it around at 35 mph.

Raging River….Now I want to do this one.   The water was a most beautiful blue…. 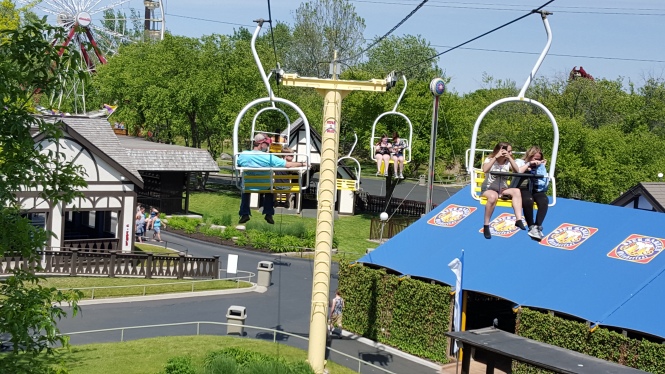 We took a ride on the Aerial ride over the top of the park.  This was a nice ride.  On the way we went through the circles and loops of their brand new Thriller Ride.  New for this Season.   “The Monster”   It is still under construction, opening the middle of June. 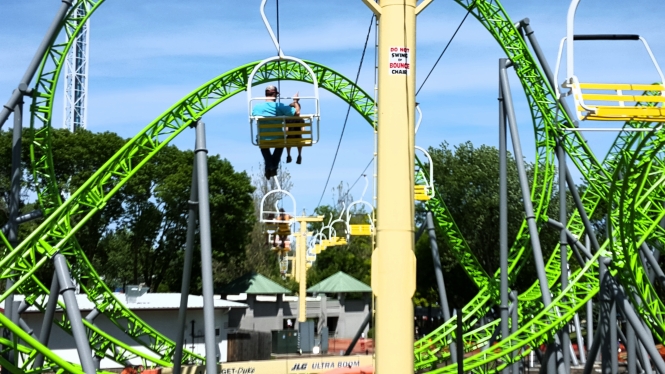 Rich heard today it costs 9 Million Dollars……Wow….on The Monster you will climb straight up a 133 foot lift hill then dropped at a 101 degree angle. At the bottom of the hill you will reach a top speed of 65 mph. The next element is a large Overbanked turn where you will be redirected into a Dive Loop that goes directly into an Omega Loop after which you will go into a sharp curve that will take you into an air time hill then and Immelmann loop. The car will then go into its last curve and it’s final inversion a Corkscrew (roller coaster element). The ride in total has 2,500 feet of track, five inversions and it will be the parks newest coaster in nearly twenty years.  It is in the final stages of construction.  They are testing the cars every nite.  They load them with sand bags for weight and have to run each car at least 1500 times before they can even begin to certify it for safety.  The are in the last stages of landscaping.  Everyone is so excited, especially the management. We heard they will be running adds on the local radio for someone to Win the honor of the First rider on the “Monster”……

We crossed over a bridge and see some cute little ducky’s with their parents and lots of catfish and a few carp.  People were feeding the fish. 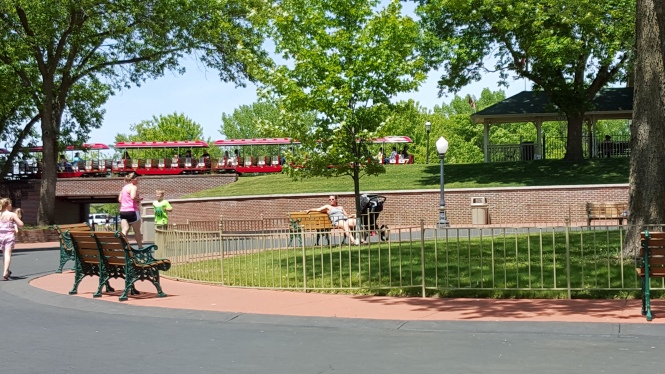 The little train had just loaded and was taking off on its trip around the park.  This is just a small sample of what we saw.  We finally left exhausted from walking.  We never made it to the back of the park.  They have several more huge roller coasters, and Adventure Bay, that will be opening Saturday, Memorial Day weekend.  It is a huge water park with large water slides, wave pool, Lazy River, and other things that we haven’t seen…………The next day I actually worked my first day.   Would you believe I worked the Duck Pond…..lol….Pick up a duck and check the colored dot and see what you won.   I did that from 11 am – 6 pm.  I had a 30 minute lunch.  It was a Monday and all the schools had come with their busses for field trips…..So many kids….They really had a lot of money too.  Several of the kids spent $20 and $30 just at the duck pond.  I always thought the Duck Pond was for the little kids.   You wouldn’t believe the teenagers that were fascinated by picking up a duck…..lol….Now it was really easy but for lunch,  I had to punch out right near the Duck Pond, but had to walk to the commissary on my lunch time, eat and walk back and then punch in again.  All in 30 min.  We are not allowed to take our lunch in the park or even buy food in the park.  We have a commissary that has hot food or sandwiches and we have to go their for our lunch break.  Well see how that goes.

The kids all had fun that day and were really very well mannered.  One kid who was around 12 was leaning on my stand and I asked him.  “Do you want to pick a Duck?……  No, I’m broke.”……. I said, ” well I bet you had a good time though”…….   He said “I was, but I was standing in a line for a long time and was almost ready to get on and they closed it”……..”Really I said, Why”?……. “Some kid Pooped In it”…..hahah….I wanted to laugh, but he was so down cause he couldn’t understand why they closed the ride when he had stood in line and was ready to go….Poor Kid…..

So back to the campground I went at the end of my shift.  Tired…..Hot…..

This is on the walk back to the campground.  A small running creek divides the campground from the Park.  This is the bridge to walk over.  We also have Molly the Trolley that comes through the park picking up guests.

We aren’t aloud to ride it in uniform.  It would sure make life easier.

Here is our campsite.   Rather hard to see, but we have a picnic table and a tree.  Luxurys we don’t have in Texas.  Rich had his orientation finally yesterday.  He will start as an assistant on the Himalayan.  He’s working it all weekend.  This ride requires 2 to run it. 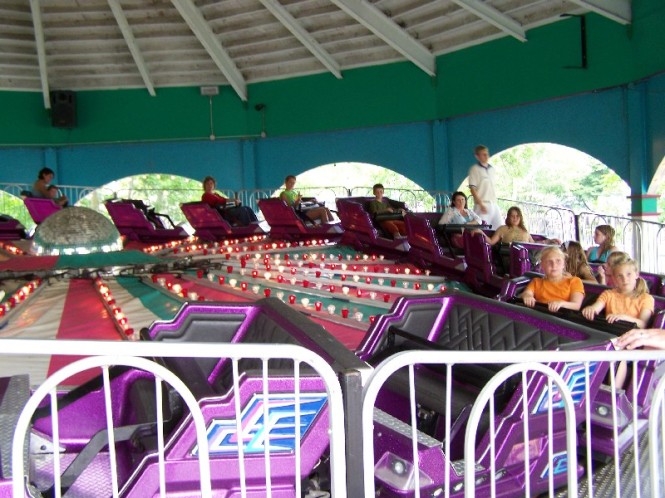 This is a photo I copied from the internet.  Its about the best one I could find of the Himalayan.  The next day I was sitting out side and looked across the street. 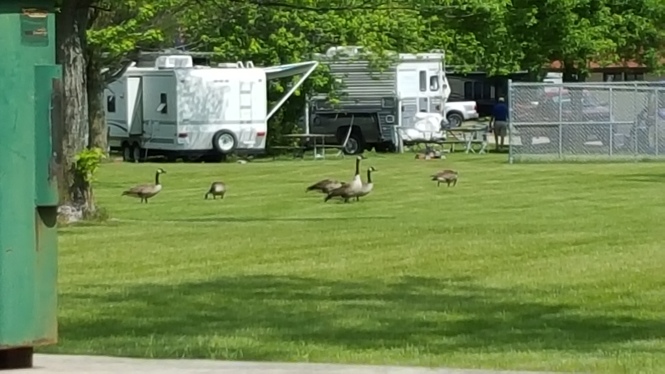 A flock of geese were out walking.

Two came over by us looking for food.   Rich through out some chips and they ate them.  We also have a pond as you enter into the Campground, so between the creek, the pond and the water elements at the Park, their are really a lot of Geese and ducks all over.  You can hear them as the fly over a lot.  So today is Friday, the start of Memorial Day weekend.  What has it been doing the last 2 nites…….RAIN……But that always happens on this weekend.  At least one day.   A motor home lost their awning the other nite, and also a Pop up camper came in the other nite across from us.  They were up at 2 am as their awning blew up and over their little camper.  Today the park will begin being open full force every day……The summer season has begun…..Oh Boy….Here comes all the people and kids this weekend……We are working every day this weekend…

……..Life in the Amusement Park Begins…….