The next morning, with Band-Aids on my feet, we took an Uber down to the water front.  Our plans were to ride the Land and Sea Ducks and also take a cruise in San Diego Bay.  We were a little early, so nobody was in line.  We had a very nice conversation with the ticket lady.  She said, “Did you hear the news yesterday about the drug busts  on the open seas?”  She said look over their.  Their was a Coast Guard boat unloading the drugs.

Near the Coast Guard boat was an orange raft type boat with mounted guns slowly circling.  They were unloading the drugs into a truck.  Later they brought in a crane to unload.  Later that night, on the news, we learned the drugs were 13 tons, valued at $353 million, and recovered from mid June to mid July.  That is a lot of drugs.  We were told, after the drugs were cataloged and what ever legal aspects had to be done, the drugs would be incinerated.

Finally we were able to board our Duck.  We had rode them before at the Wisconsin Dells.  We followed the busy road following the water front to the North side of the Bay.  We past beaches,  Harbors filled with beautiful boats, Yacht Clubs full of Gorgeous Sailboats.

We entered a boat launch area and drove into the water.  He then engaged his propeller on the Duck.  The airport is located near the water front.  You could see the planes come in.  The Captain took a nice leisurely drive up the North Coast line out to the fisheries.

By the fisheries there were tons of birds hanging out and seals laying out and sunning them selves.

We went on up toward the Bay opening a little further till we came to Point Loma, the Naval Base home of the Submarines.  Now they were hard to see.  They were all fenced off so we could only go so far.  Finally we turned around and drove back.

We drove back up on land and past all the beautiful yachts and boats back to the  waterfront park area.  This is the Maritime Museum area.  Their are tall ships,  submarines, Aircraft Carrier USS Midway.

You can take tours of many of these ships.  Finally it was time to board our boat to cruise the North and South Bays.  It would be a 2 hour ride.

This is the Hornblower.  We boarded and walked to the top deck.  We pulled out and headed south toward the Coronado Bridge.  We drove under and seen many more ships in the dock at the Naval Station Ship yards.

We seen the Red Cross Ship, and many more ships in dock. We turned around and went back under the Coronado Bridge to the North Bay.  We went back to some of the areas we had been in the Ducks.

The Bay was so Beautiful.  The sky was blue, the wind was gusting softly, the birds were singing in the air and swopping down with the wind.  The waves were just rolling along as we sailed right along passing sail boats and also a Navy Ship coming in from the sea.  Such a beautiful day.  On the way back we seen a speed boat.

They were having a blast.    When we were pulling back in, we looked over at the Coast Guard Boat.  They were done unloading the drugs, had packed up their orange patrol gunboat.

We took another Uber back to the Hotel…..What a fun packed day.   Now time for Dinner.  Their wasn’t much in the area for resturants.  We have been eating most of our meals across the street….Jimmy Carters Mexican Café and Cantina….

Rather a strange name.  I tried to figure out the correlation of the name to the ex-President.  Then I met the owner.  “Jimmy Carter” was his name….

Just a white guy running a Mexican restaurant, with no relation to the ex-President.  That was our last nite in San Diego.  We went up to the roof to do some site seeing.  It was another beautiful nite.  It seems like the weather is always perfect….’

The View to the Bay from our Building top was Beautiful

The view towards the city.  You can see a plane coming in on the left side.  It descends down through the city buildings on its flight path to the airport.  In the morning it was time to leave.  We packed up and took on last look. 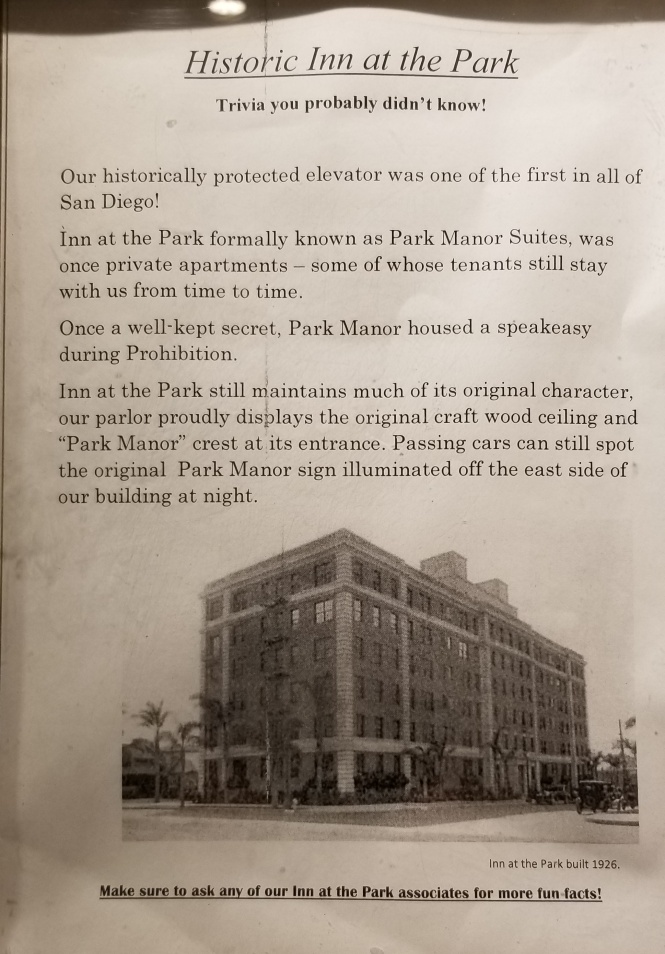 This is the front.  It is called Inn at the Park.  It is now a Time Share Hotel.  It has a rich history.  It was private apartments as well as a Speak Easy during Prohibition times.  The interior has been preserved with all its rich woods and decor.  Such a Beautiful Building.