On our day off last Friday, we decided to attend the Balloon Classic.  It was being held all week south of Des Moines in Indianola.  It was maybe a half hour drive.  It has been going on since the early 70’s.  It its early years, Rich’s dad and stepmom Dorothy had lived nearby.  We came for a visit and they took us to the festival.  All I remember was, it rained, it was miserable out and the balloons never took off.  lol  We have seen the Albuquerque Balloon Fest in New Mexico.  It is absolutely wonderful.  Words cannot express the beauty of hundreds of balloons on the field taking off into the sky.  In Albuquerque, it is common to see a balloon or two in the air on a nice day. The wind drafts make it easy to fly.  Because of the mountains on both sides, it makes like a box canyon effect and they can fly to certain levels and attain different wind currents to fly in a circle.   I can remember being at my dad and stepmoms house in the bathroom and hear the sound of the burners.  I would look out and see a hot air balloon flying by. I was fascinated.

Friday morning, the first thing we did was go to HyVee and stock up on grocery’s.   The gates opened at 4 pm.  So we took off and headed south.  We found a little family restaurant in Indianola that had really good down hometown cooking.  We both had chicken fried steak.  Our next stop was the National Balloon Museum. 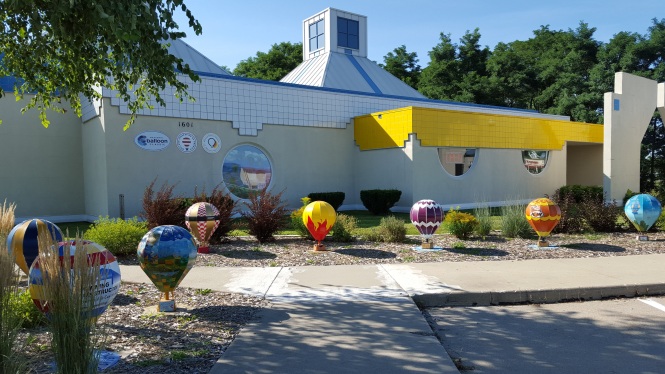 It was just chocked full of balloon equipment and artifacts.  So many different types of equipment have been used through the years. 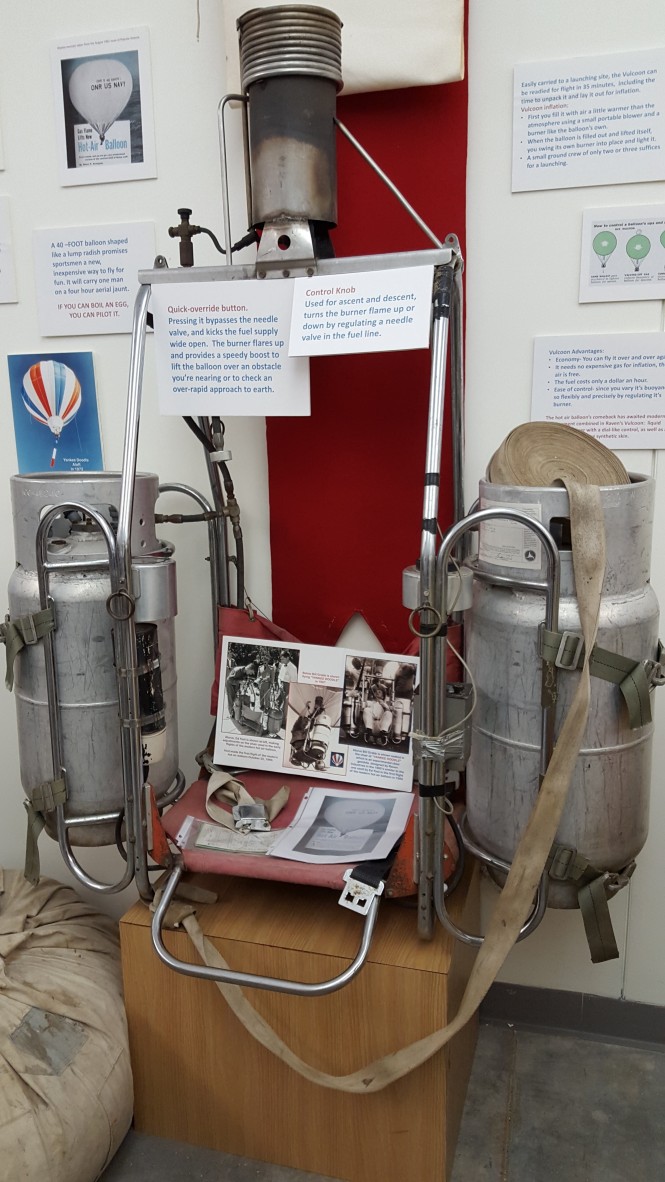 This is an experimental chair called “Yankee Doodle”.  It was built and used in the 60’s in the early flights of hot air balloons. 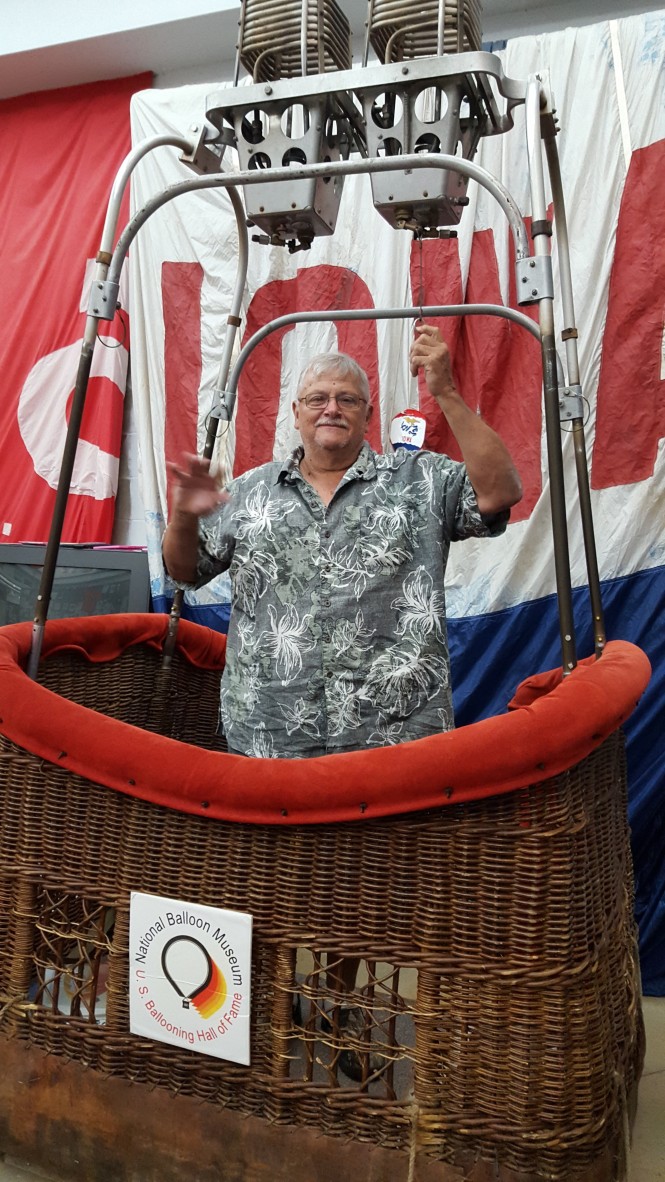 Now this next picture is of a two man carriage that hangs below a blimp or airship. 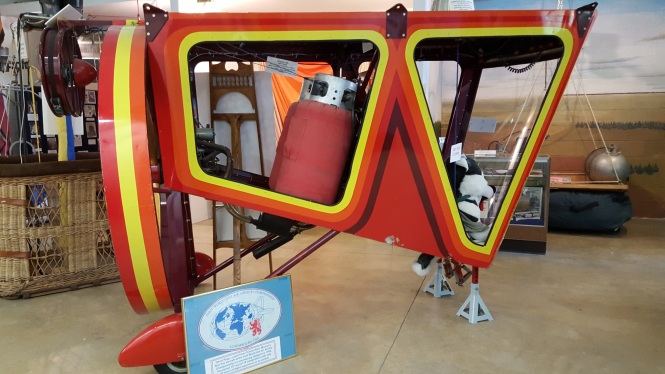 It is really neat.  The very back is a large propeller. 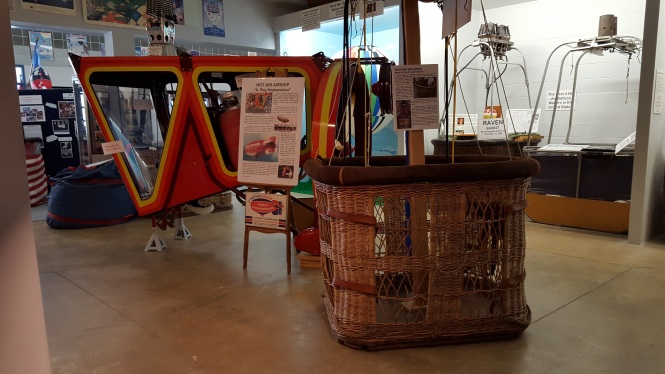 This picture will give you an idea of how large the blimp is compared to the carriage underneath. 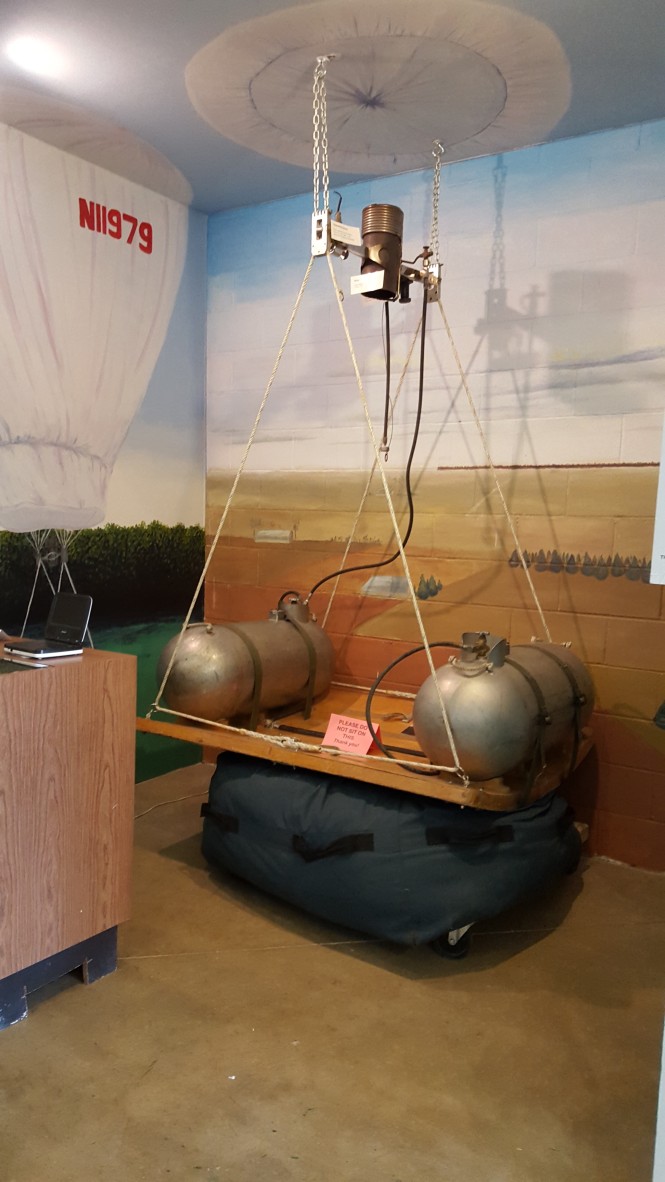 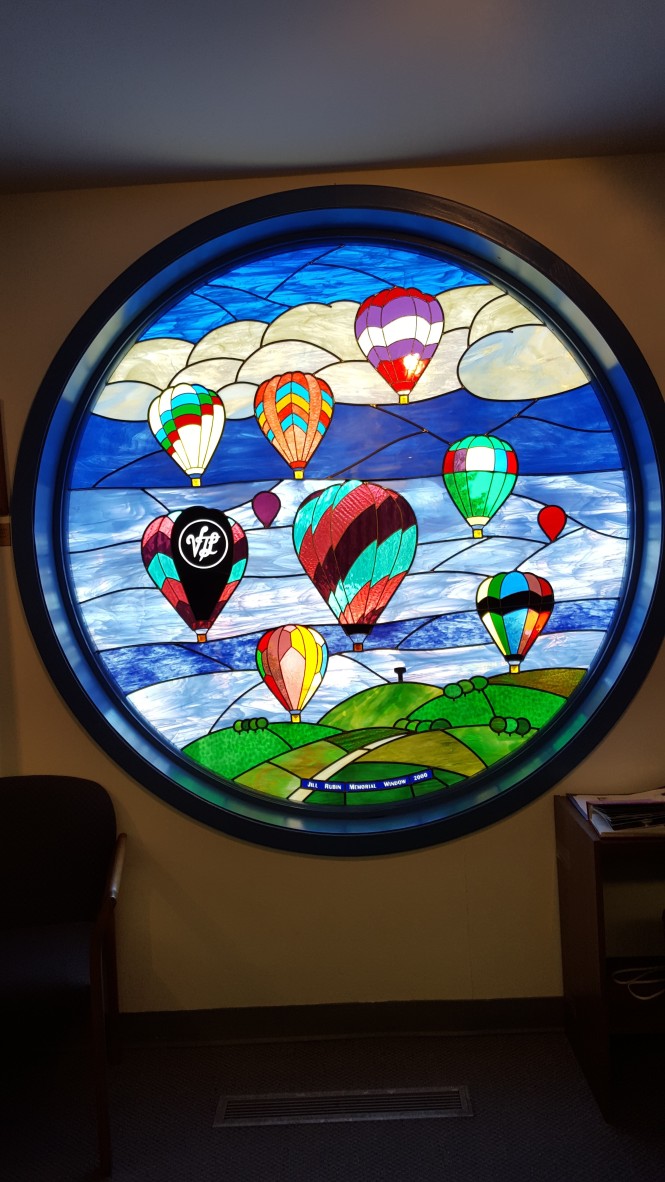 The beautiful stain glass window in the front of the museum.  After that, on to the Classic.  It was located out in the country.   It had moved to a new venue in the 80’s.  We drove in a they collected $5 a person.  They directed us to park in this huge field.  In the distance we could see all the food stands etc.. set up.  We walked in and rented two white plastic chairs for $2 a piece.   Now, How do you forget to bring your chairs….lol….We found our place and sat down.  Now this was farm grounds at one time.   But what a perfect layout.  It was like an auditorium or amphitheater .   The ground we were on was terraced down just like stadium seating.  Not a bad seat in the house. 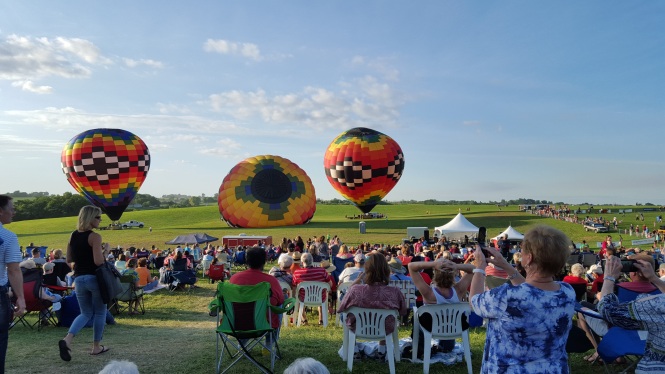 Way down in the middle was the band playing music.  Excellent songs and sounds.  It looked so far away.   But it sure wasn’t…….We heard their were going to be around 70 balloons.  Many teams were from the area and surrounding states.  Some even from Albuquerque.  All the trucks and trailers with their balloons in tow, met on the top of the hill for a drivers meeting.  At 6:30 it was announced the weather was a go…….The balloons always depend on the wind and weather if they will fly.  Now we expected a mass ascension, but that wasn’t what happened.  All the trucks drove off back down the hill and disappeared.  On the hill in front of us on the left was a giant x.  At the end of each arm was a plastic swimming pool.  Also their were 4 tall poles in the ground.  In the center was a mannequin type figure with a batch of balloons coming out her head. The pilots of the balloons launched from a distance, a mile or more away, and a few just over the hill.  They came one by one….Then several at a time.  Some very high, and then they would drop down near the target.  Some stayed low and tried to reach the target.  Most of them missed by a long way.  They wind draft just wouldn’t co-operate.  But what a site it was as they rose from the distance and flew in.

The trick was to pick their launch so the wind would float them over big x.  They had a stuffed animal in their baskets to throw in the pool, and hula hoops to throw over the poles.  Each trick was worth money.  If they was able to grab the balloons from the mannequin, it was the top prize.  Only 2 balloons made the toss in the swimming pools and nobody made the hula hoop throw. 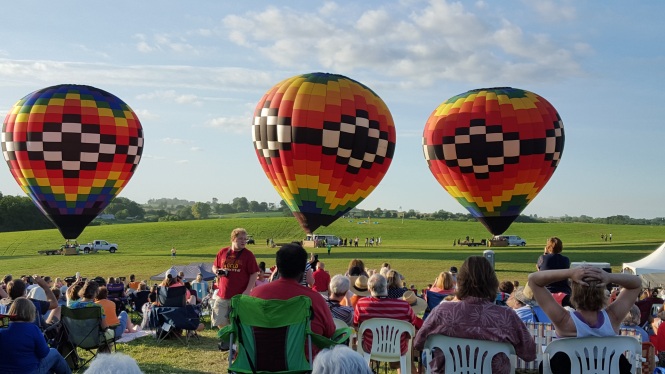 They also had 3 balloons give rides.  Before the balloons arrived the inflated and loaded up and took off. 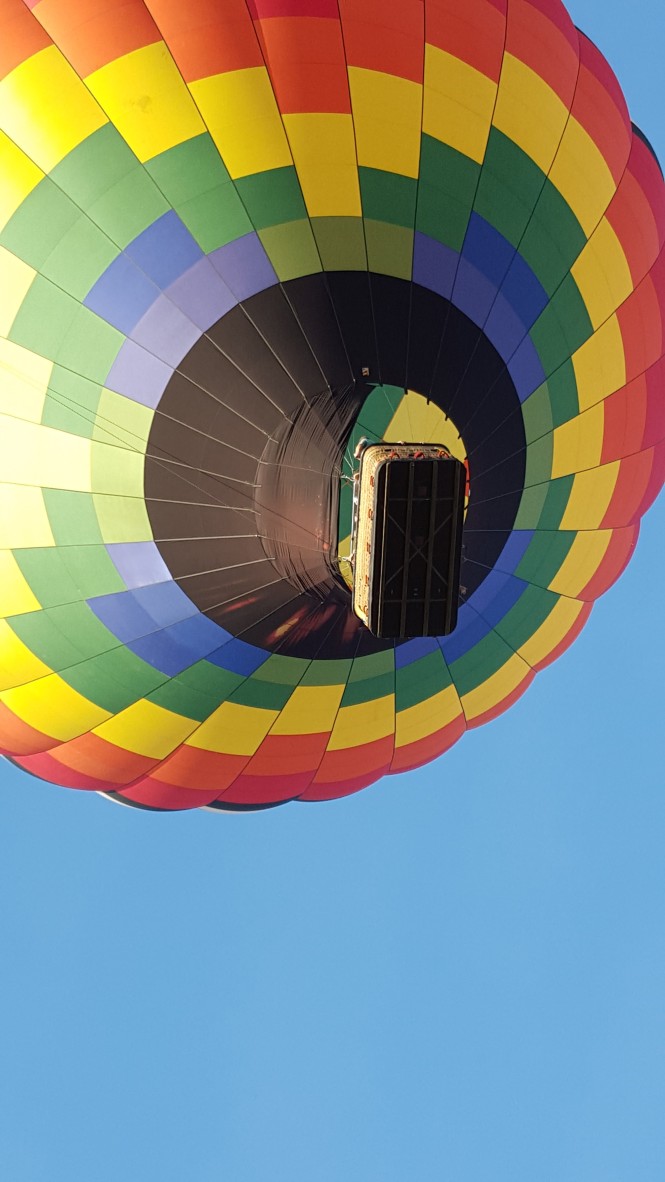 These went right over our heads.  They had large baskets on to hold the people. 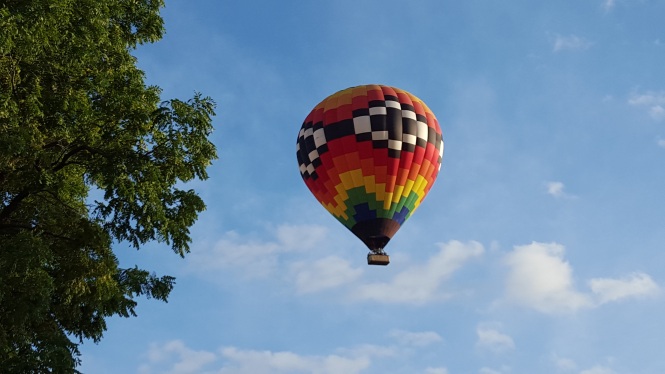 They were all so beautiful.  Finally the contest was over.  Of the approximately 70 balloons that took off, only about 35 was staging for the night glow.   Some had landed on the hill, some had flown way over, landed somewhere else.  Packed up, drove back to the park area, and then unpacked and blew it up again.  I think many balloons probably didn’t want to come back and unpack again. 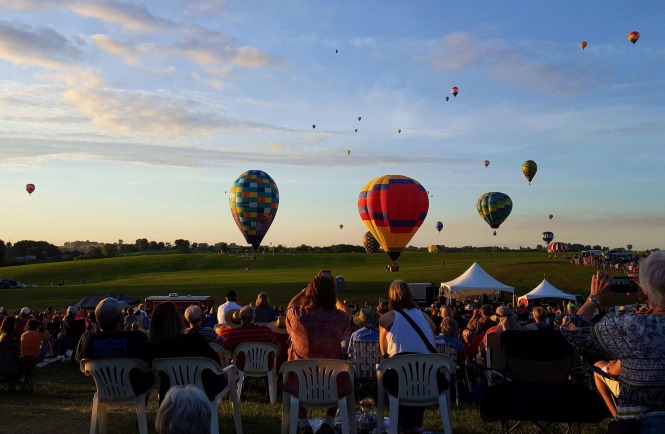 The balloons were staged across the hill side at twilight.  The band played on and finally the announcer was ready for the “Nite Glow”.  It was really “AWESOME”….So beautiful.  All the balloons were regular or teardrop balloons except for one. 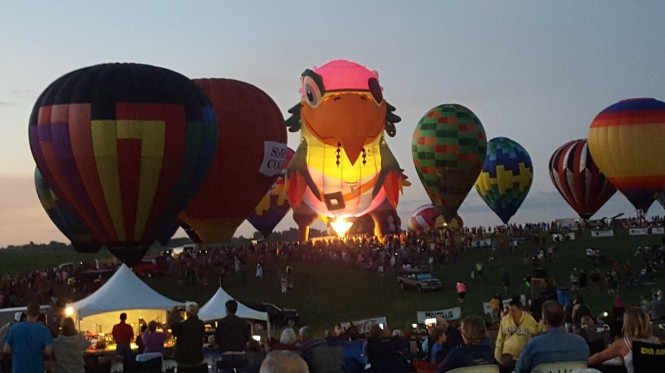 All the balloons lite up again and again….The announcer played to the pilots to “GLOW”….over and over……Just Beautiful….. 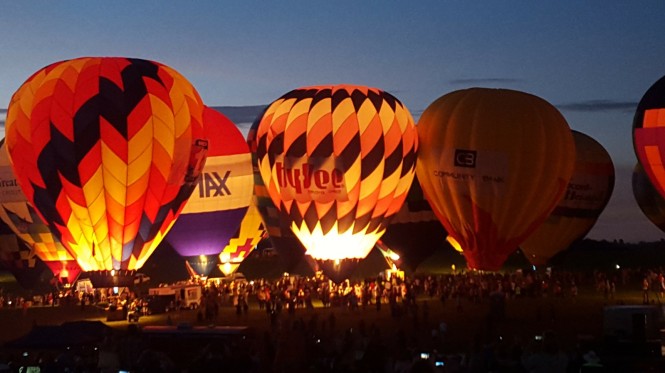 Finally they left the public down on the field.  I went down and took a few pictures. The sounds of the burns were tremendous. 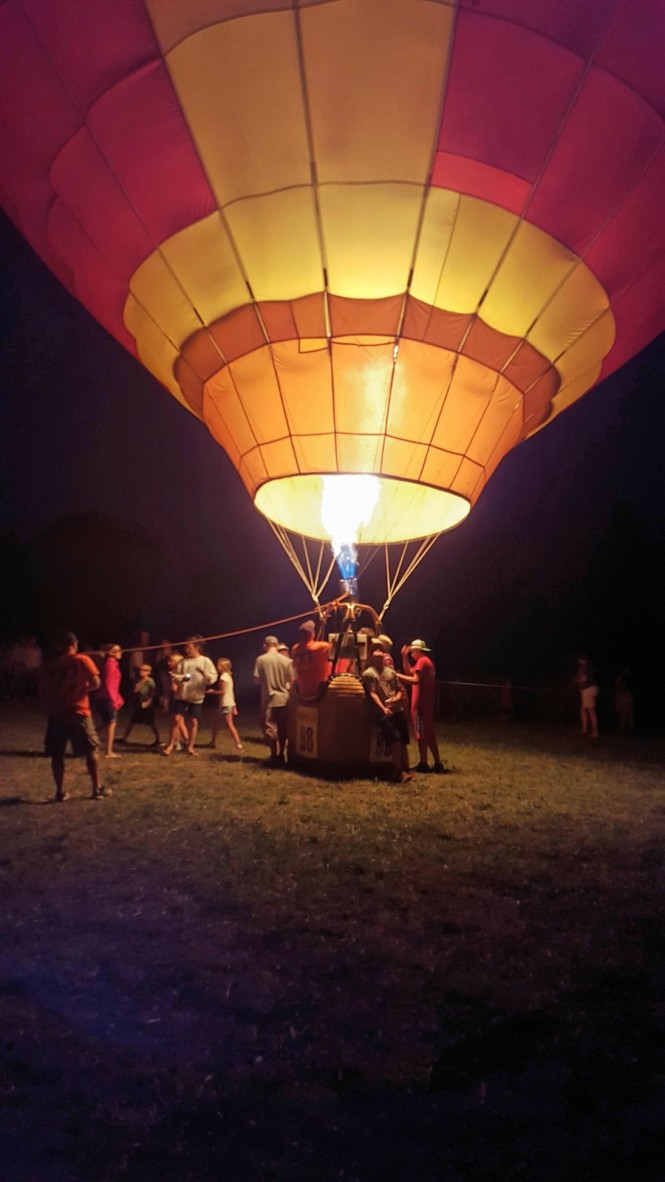 The pilots demonstrated and answered many questions.  They were very courteous. 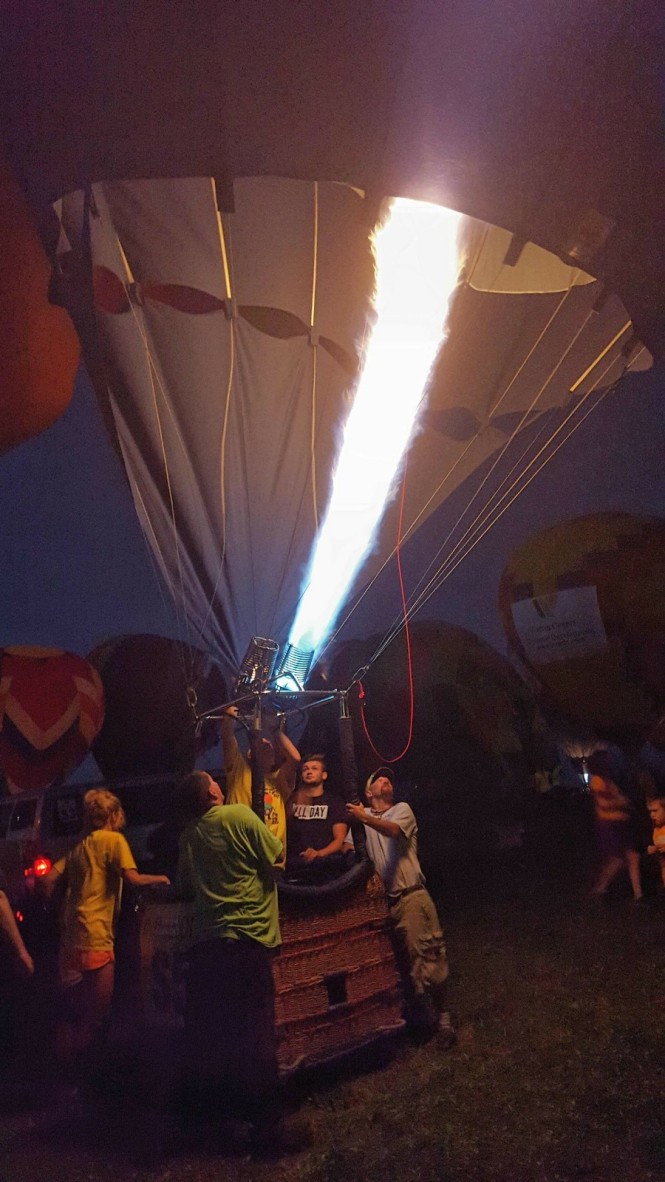 This picture, they are doing a burn into “Peg Leg Pete” 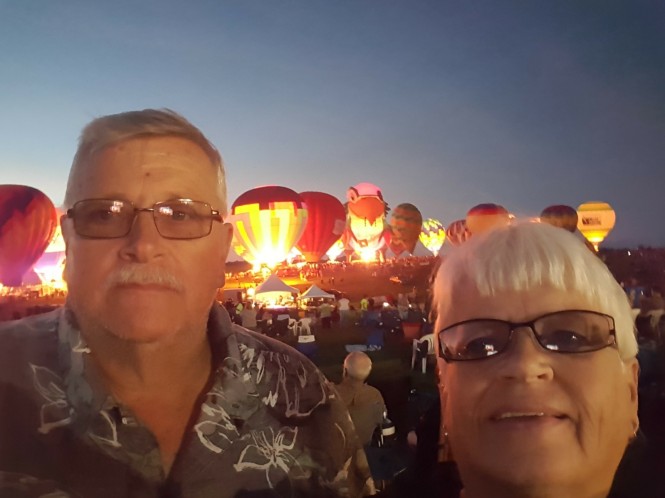 This is our first attempt at a selfie….lol…Rather silly looking aren’t we…..lol….Finally it was all over.  We had a fabulous time.   This was a great Festival.   And only $5 a piece.   So worth it and much more.   We headed home after a wait in the parking lot, Finally only an hour later, home and ready for bed…………..

Saturday, the start of another Work Week…..Yuck……