The Park is almost empty of all the Winter Texans.  We’ve had a few more head north.  On Sunday we went to the Island with Cathy and Bud and Ann, Cathy’s sister.  Ann flew down from Canada to spend the last week with them.  They are all leaving Wednesday.  We ate at Dirty Al’s, at the Pelican Station in Port Isabel.

It sits right on the Lagoon near the bridge that goes to South Padre Island.  It has a beautiful view through the windows of the bridge.

You can also see the Dolphin Watching tour boats that are right down the street.  Sometimes you can even see the Dolphins from here swimming and jumping in the water.

After we eat a wonderful dinner we decided to ask for Dessert…..Oh How SINFULLY Delicious it was. 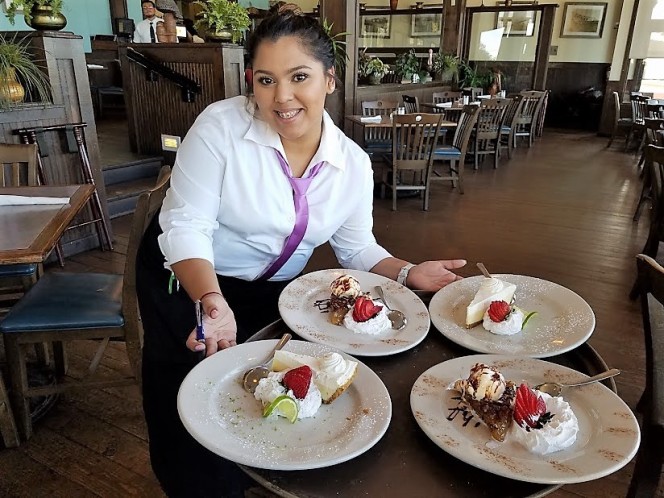 The waiter and waitress were so nice, the took our pictures and had fun with us.  Just look at those yummy desserts.  Key Lime Pie, Cheesecake, Pecan Pie with Ice Cream and chocolate syrup……Yes, We Left Full…..

Last Friday we took a trip to Progresso which was also Cathy and Buds last for the season.  We walked around the streets and through some of the shops.  Bought some meds….(cheap)….eat dinner and stopped at Ponchos for a drink.  This girl is always on the streets trying to sell her jewelry.  She doesn’t speak English and is slow.  But she knows how to sell.  She know all the regulars and always hangs around.  Her name is Judy, although its spelled different in Spanish.  She calls Cathy and Bud her Mommy and Poppy.  But she also calls Glen her Poppy….I think she must call everyone that.  Last year, she hung around and wanted to carry my Piñata all the way to the border bridge.  Several of us gave her money and she was happy, but she still hangs around till you leave.  The last 2 times we have driven across now.  No more walking across the bridge.  But they get you for parking.   They find you a place and want money for watching your car.  You can also get a hand wash and wax for around $12.   It is a Good Deal.

We had some fun trying on hats…..They always say…..”What you want Lady? It almost Free”  ……So another 2 days and they will leave for Canada.

I also want to report on Randy the Reindeer….Remember him from Christmas?….Randy decided to head to Maryland with his Eastgate Parents Alice and Tom.  He has never met his family so he is heading east….He will proudly ride on the dash in his chair and see the sites of this great America.  You realize he has only seen it at nite with Santa, helping to pull the sleigh on Christmas Eve.  So this will be a GREAT EXPERIENCE for him.  We’ve had our first report from him. 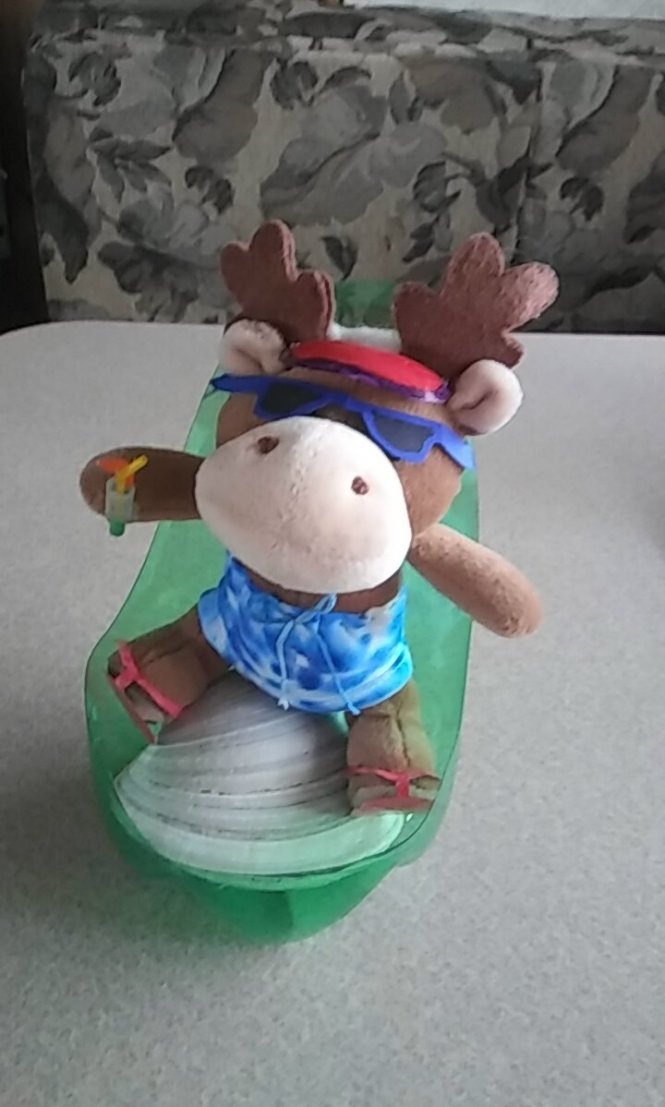 He went out shopping to buy appropriate Beach wear.  He has new sunglasses, swim trunks, even flip flops on his feet.  He has a visor on his head also to protect him.  But he still has that Margarita glass in his hand…..I think his parents will help him control his drinking problem though.  Alice and Tom are good people and they know what’s best for him……lol…

Here is a really cool picture of him on the Beach.  They are at Galveston Island for April before they start heading north.  So I will be reporting on Randy every time he reports in….. So I will close with several pictures of friends gone north…..Everyone goes North ya know…..We are the most southern point of the USA…….If you look at the map, you will see we are almost in line with KEY WEST FLORIDA 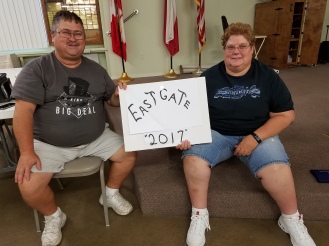 Christmas is on it’s way here at Eastgate.  We took all the Thanksgiving decorations down and set a date to decorate for Christmas.  Many of the girls showed up and in an hour the tree was up and the hall was decorated.

The South Hall looks so nice especially with the new paint job this summer.  I’ve been busy planning lots of activities and trips for the rest of the season.  It going to be a grand year.  Our good friends Larry and Cici, have been looking at trailers.  They want to leave theirs here permanently and not pull it back and forth.  So we went shopping with them.

They found a beautiful 39 foot 5th wheel, and also a golf cart.  They have the golf cart at home already and the trailer will be delivered Tue.  This picture was taken in the RV Sales lot.  They have this rickshaw to run customers around in.   Rather cool.  The salesmen drove the bike while Cici and I were in the seat.  Larry and Rich took the Golf Cart.  They are standing in front of their 5th wheel.  So Tuesday will be their day to switch their belongings to the new trailer.

I would like you to meet Randy the Reindeer.  lol.  Now I have an Accomplice that came to me with this story and plan.  Randy hides Every nite.  My Accomplice texts me a Clue.  I put out the clue on FB and in both halls by 10 am every morning.  So this has been going on for just over a week.

Here is Randy’s story.  Last week we almost lost him.  Someone dropped him in Nite Deposit.   Today he was found and went to Progresso Mexico.  I don’t know if he crossed over or stayed in the car in the parking lot.  But he returned.  So this little game is starting to take off.  It seems we are getting more and more participation, and lots more people are getting a kick out of it even if they don’t hunt.  The clues are supplied by my Accomplice.  Today the Clue was….1, 2, 3,  Strikes….Your out…..    So finally he was found by a yard statue of a baseball player.   So they aren’t really that hard.

We have also started Crafts finally.  This is Alice and Cici with their Tomato Cage Christmas Trees.  These are so easy.  Turn your cage upside down.  Use a zip tie to tie the wire ends together.  Wind the lights around and tie them, then your garland. 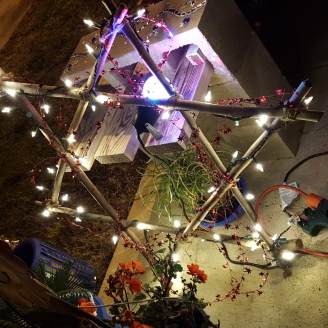 Our next project is a 6 point star.  Our friends from Canada, Glen and Kathy found one at a garage sale back home and brought it.  Another friend Roberta got all the sticks from our trees that are trimmed and cut a whole box sticks all the same length.  So the only cost was zip ties and twine to join points and a set of 100 lights and decorations.   Another very easy and cheap project.

Now the other morning at Coffee and Donuts, another couple was with us.  The question was “Why is the toilet in front of your trailer”  lol.  Well, the reason is,  one of the trailers needs one replaced.  Rich found this one at Habitat for Humanity….So he brought it home and it will be installed next week.  But until then, its our conversation peace.  So I said wouldn’t it be funny to sit on it and put that picture in the Eastgate Video at the end of the year.  So later that day,  …..THIS IS WHAT I WAS TEXT….

So So Funny,  I want you to meet Rob.  He even had to pull his pants down.  OMG……I told him,  Love the Pic, but sure can’t put this in the video,  Some of these people would have a heart attack……No sense of humor….But WE ALL LOVE IT…..HILARIOUS…… 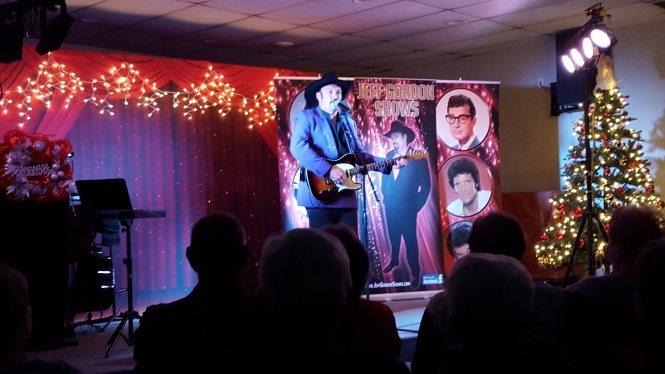 Last nite we had our first Entertainment here in our South Hall.  Jeff Gordon was here.   NO, NOT the Race Car Driver…..The Singer….

He did a great job,  Elvis, Tom Jones, Conway Twitty, Glenn Campbell,  Neil Diamond, Merle Haggard, and more.  He was originally from Bloomington Illinois.  His daughter lives in Washington Illinois.  Only  1 hour from my town.  He now travels the south in the winter and heads to the Mid West in the summer.  Today we had a Christmas Bazaar at the hall. 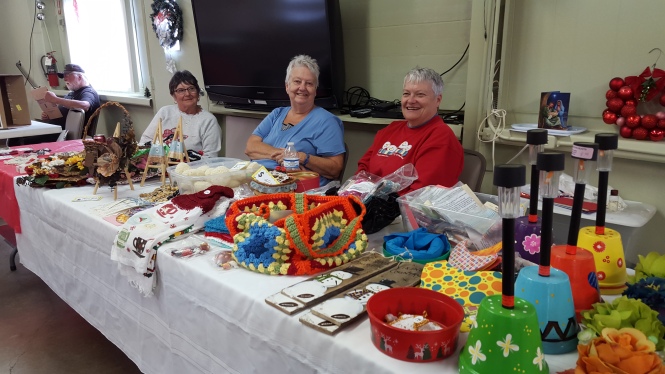 Lots of neat crafts.  Crochet and knitting,  jewelry,  woodcarving, and even lights made out of liquor bottles.

This past week was by Grandson Austin’s 6th Birthday….Also Dexter had his 2nd Birthday.  So the boys shared a birthday party 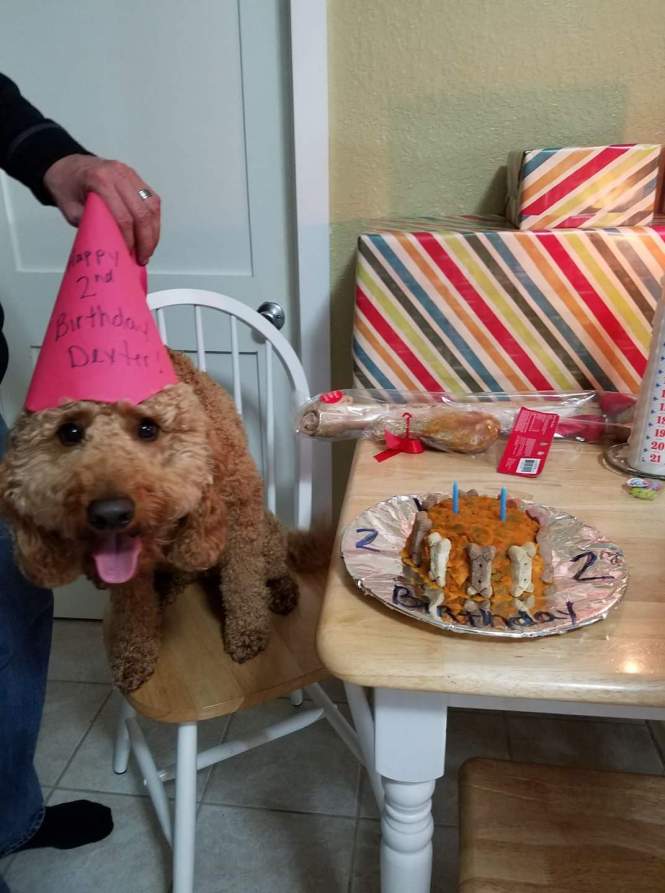 Yes, Dexter is a Very important member of the family.   He is another son….lol…Dexter is a good boy and always poses for pictures.  But he doesn’t look to happy about his hat does he…..lol