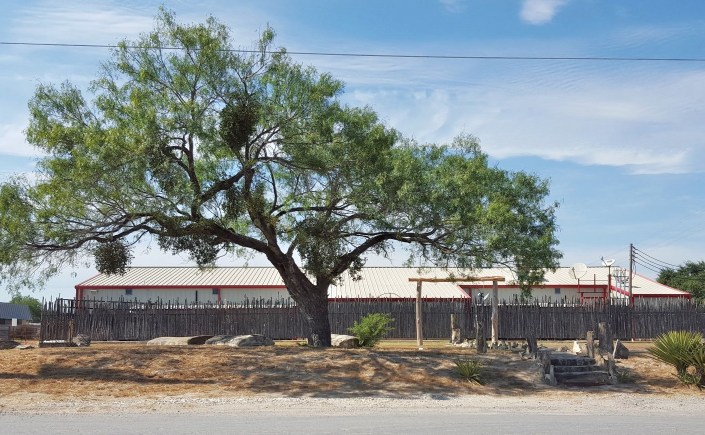 Last Friday was Richs’ day to go to the gate.   They closed the gate at 3 pm. for the weekend for the hunters.  We think they were trying to pacify the landowner because they were running past the Oct. 1st deadline.  We don’t have to go back till Mon.  Sat. morning, we got up and did a load of laundry and decided around 1 or 2 to go to Walmart for cat treats and litter.  We decided to go to a town called George West. {weird name}  We headed east out of Tilden and first came upon the Choke Canyon Reservoir which is run by the state.  Well they wanted  $5 a person just to enter.  So much for that.  On down the road to the next town.  Its name is Three Rivers.  From a distance we could see that it had a HUGE Oil Refinery in town.  Looks like Star Wars Town Doesn’t it….lol… 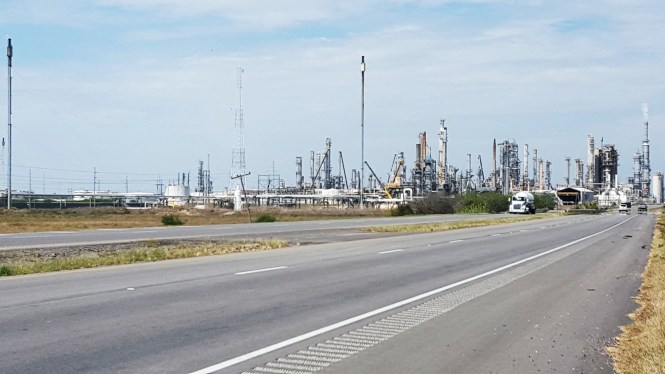 As we pulled into town, you could see that the town was attached to the Refinery.  The town was wrapped around the refinery on several sides.  Obviously the town survived on the refinery jobs.  Again several NEW motels in town and lots of campgrounds.  As we drove from Tilden, we could see we were in the heart of oil country, but the boom was over.   So many campgrounds, now deserted or just with a handful of campers.  Several places were trailers all in a wagon circle or lines like little streets.  They were similar to Fema trailers.  They also were deserted or just a hand full of vehicles out in front.   As you look in the distance across the land scape, you could see many oil tanks in the fields from wells that had been drilled.  The highway is just busy with tankers carrying oil to the refinery.

On we went, with the next town being George West.  It wasn’t what we expected.  It didn’t look big enough to have a Walmart.  We seen a sign that said McAllen 150 miles.  I jokingly said.  ” We should go have pizza at Mr. Gatti‘s.”   Its a great pizza/salad bar in Harlingen.  Why not? We had the weekend off.  Three hours later we pulled into Eastgate Park in Harlingen.  It felt like going home…..lol….We pulled in front of Debbie and Ricks house {managers}.  They came out totally shocked, thinking we had come early.   lol.   “No, we were just on the way to Walmart”……lol…Had a nice visit with them and went down to visit more friends.  Bev, Roberta, and Ken were just wrapping up a garage sale.  We had a wonderful visit with Bev.  Her husband Ernest had just passed away several weeks before.  They were Workampers. Bev cleaned and Ernest was the I.T. man.   He was so smart with computers.  Last year, he had spent all season trying to get the new internet system to work with the outside company.  He was not health, but a “Super Guy”.  He will be so missed.  Not only for the work he did, but as a friend.  Then we ended up at Roberta and Kens.  If you remember from last winter, Roberta has the Parrot and the little cockatiel.  “Maui and Love Love”.  Had a great visit with them and finally found a motel.  Of course no clothes or makeup, so a stop at the Dollar Store to buy make up and Cat treats and litter.   lol.   The whole purpose of the trip.   In the morning we were next door to the Golden Corral, so after breakfast we headed back up the road towards Tilden.

Back in Three Rivers, we stopped at DQ.  In pulled some really cool cars.

It was a Car Club from San Antonio, out for a cruise.

This one was really neat…. 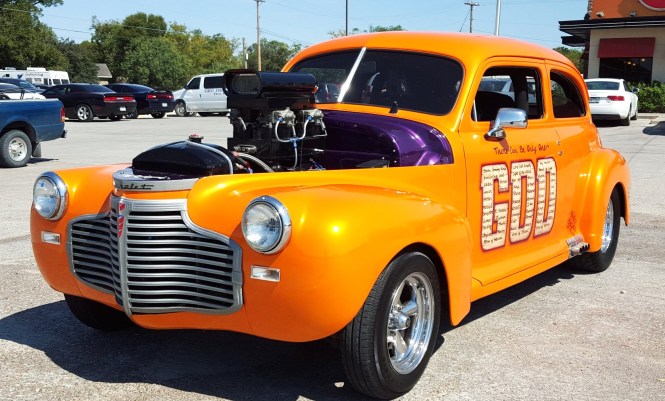 The engine area was painted bright purple and right inside on the nose, above the grill was this signature. 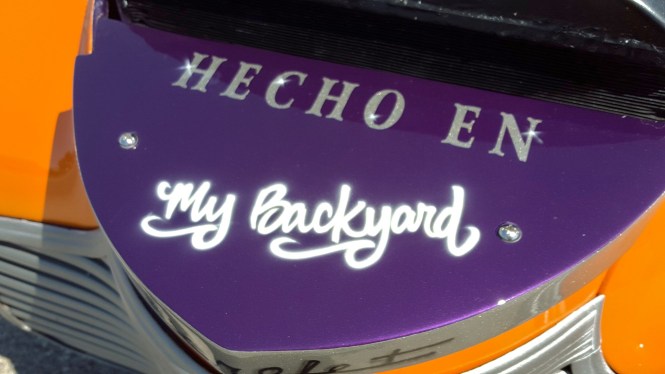 We were back home before 3.   Poor Kitty, he was deserted……Gave him lots of treats and he was “Happy” again…..Monday was my day at the gate and Today was Rich’s.  Its getting slower and slower.  I decided to walk to the store today.  It is always closed when we get home.   How silly.  It was in the 90,s again.   Lucky I didn’t die of heat exhaustion.   The store was nothing to brag about.  All I bought was a sack of Ginger Snaps, and a Drumstick ice cream.  Had to eat it FAST…..

On the way I went to “BOOTHILL CEMETERY”……….

Located in Tilden is Boot Hill Cemetery, one of the only two authentic cemeteries of its kind in the southwest. It was so named because many of those who were interred there died violently, “with their boots on.” Many of the early graves were those of people who were killed in accidents, murdered, or who died of cholera during an epidemic in 1869, although some were known to have died of natural causes. The cemetery was established sometime after Frio Rio came into existence in 1858. It is currently located behind the bank half a block north of the courthouse plaza on Highway 72 and half a block east of State Highway 16, across from the new sheriff’s office. In 1877, Boot Hill Cemetery was abandoned in favor of the present Hill Top Cemetery and then neglected for more than half a century. During this time a number of the markers deteriorated, fell down, and became lost, along with the local history they contained. In 1955, when the Cenizo Garden Club was organized, its members began to clean up and restore the cemetery. They cleaned the plots, cleared out the brush, and located as many graves as possible. 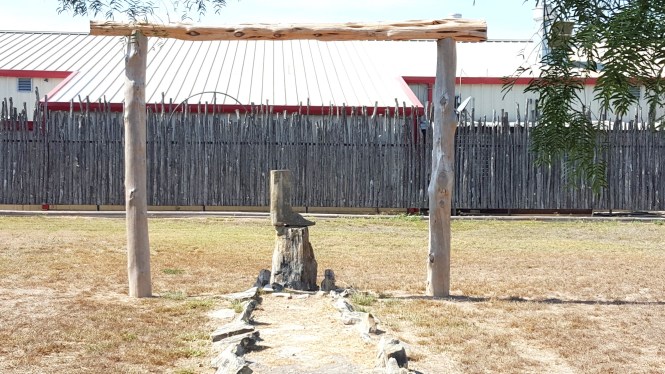 The grounds were enclosed by a low border of native stone and the Boot Hill Cemetery sign, a large boot made of masonry mounted on a large slab of petrified palm stump, was added to the cemetery grounds.

The club was also instrumental in obtaining a historical marker, which now stands at the entrance to the cemetery. 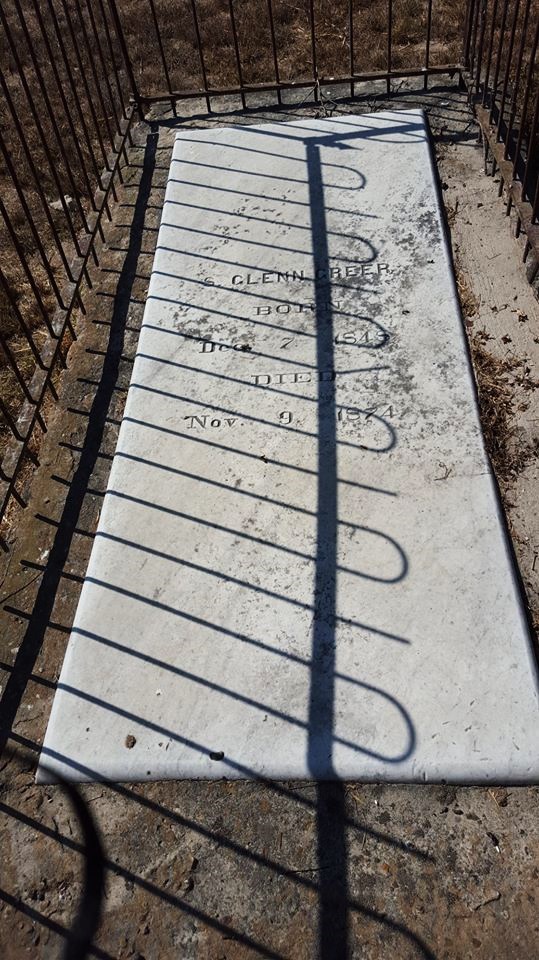 This is the only grave that has a name on it…..Glenn Greer….died 1878….. He was thrown and killed while trying to ride a half tamed horse.  His grave is still evident today (July 2002), as his family was notified of his death and they sent a iron railing and marble slab for his grave. 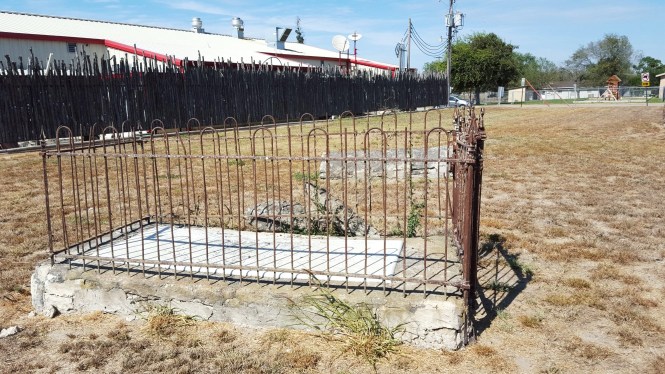 Epamindondas M. Crain had made a trip to San Antonio in 1869 when the cholera epidemic was raging, contracted the disease and died a few days after reaching home.  His headstone reveals that he was born in 1816 and died in 1869.  He served during the Civil War and was a private in the 29th Brigade Texas Troops Confederates States Army.  Three other cholera victims were also buried here during this time, but their identities are unknown.  All the graves of the cholera victims were completely sealed with rock tombs.   The story that has been handed down is that the citizens of Tilden were so terrified of cholera that they were afraid it  might work up through the soil and infect others, so they sealed these graves in rock tombs.  How true the story is, no one knows.  (Note: When Renee Smelley visited the cemetery in July 2002 these graves were evident by the rock tombs that were on top of the ground, but were falling in and apart.)

Dick Gossett was wounded in a gun battle at Fort Ewell and buried here in 1869.  Known as one of the most noted outlaws of this area, a confederate deserter and a ruthless cold blooded killer.  Dick’s brother, Malachi, and their partner, Tom Green, tried to get him to Tilden for help, but he died before they reached town.  Note: No headstone located.

John Smithwick was murdered in 1870 while he was being held prisoner of the law.  The murderer thought Smithwick knew too much and this might be brought out during the trial.  Evidently the murderer was later shot by another person seeking revenge for the murder of Smithwick.  Note: No headstone located.

A stranger arriving in town on the stage coach had the bad judgment of walking around town in a top hat.  Some men from a local Dogtown saloon took notice of the tall hat and jokingly decided to put a bullet through the crown.  Clabe Young, one of the pranksters, had bad aim, shot to low and the unfortunate stranger was killed instantly.  Note: No headstone located

Wheeler, Phelix, infant son of Leonidas and Sarah Walker Wheeler, died of natural causes.  He was born on September 13, 1870 and died on October 16, 1870.  Note: No headstone located..

How many others are buried in Boothill Cemetery we will probably never know, but it is thought  that others were also buried here before 1877. 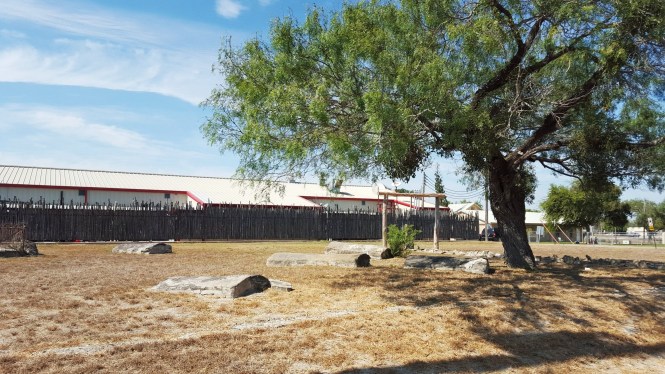 Tilden was on the caravan route between San Antonio, Dogtown, Fort Ewell, Laredo and Mexico.  Some time during the Civil War a stage route was also added and saloons began to spring up in Dogtown.  These all brought many undesirable characters to the town as well as men who were on the run from the law that used the surrounding area and brush to hide.  Some of these undesirables provided quite a few occupants for Boothill.

This sign was at the corner of the court house…….Rather interesting….I decided to include it for all the history buffs…..lol….Tilden is the county seat of McMullen County