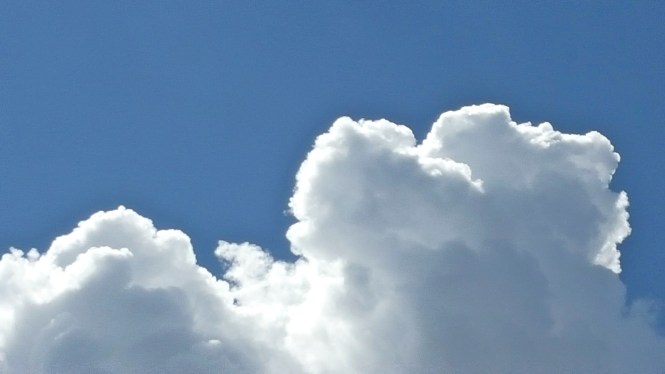 Happy Labor Day weekend to All

…..Here we are Celebrating the Holiday working….lol…but doing NOTHING….About 3 days ago, the oil company (Sundance) decided that they couldn’t fix the well and moved everything out.  Of course we weren’t told anything about what was going on.  The first we knew about it was just before sunset.  One of the workers, Randy, came up from the rig.  He gave us his grill, 2 bags of charcoal, lighter, tinfoil, and 2 pkgs of baby back ribs with a jar of rub.

He said they were packing up and leaving in several hours.  Wow.   We were so surprised…..Surprised they were leaving, and really surprised, he would leave us all his Goodies…….. He had been going to grill that nite for some of the boys, and when they got the word, he decided to get rid of it all.     What a Nice Guy. So back down to the rig he went.  Little by little they started leaving that nite.   The tower had already come down, but the spot lights remained all nite.  Randy was out before 10 pm.  He was heading home to Laredo.  The next morning more men and equipment left. 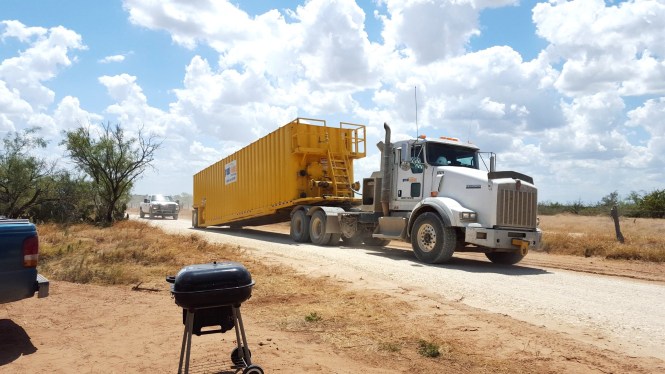 2 water tankers left.  They are a rather strange design, but common here in Texas.  The spot lights left, flat beds and drop decks came in to load equipment consisting of cranes, pipes, tower, and etc.  Finally the portapottys and the garbage cage even left. 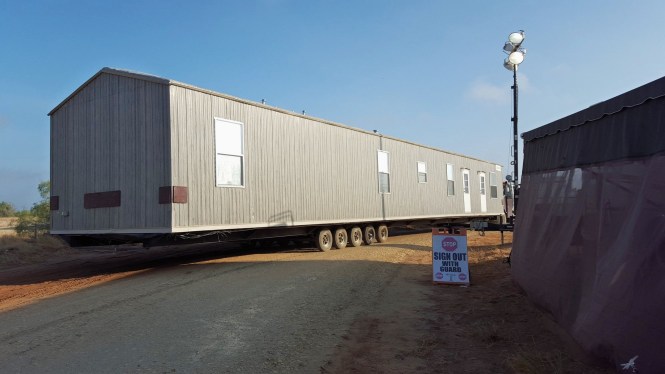 Almost last came the company trailer.   84′ of trouble….lol…This guy had quite a hard time getting it out.  Our gate is right at a curve in the road, which should make it easier, but was still hard.  He managed to scrape about a foot section on the side of the gate…..Ouch…I seen that one coming.  Finally, it was out.  Later only one last thing…….The people came in for the rest of the rig which was folded on a trailer.   So went through the log and ….Yes everyone who had came in……..had went out…..So I wondered, what does it look like down their………..So I took a ride down to the oil pad…. 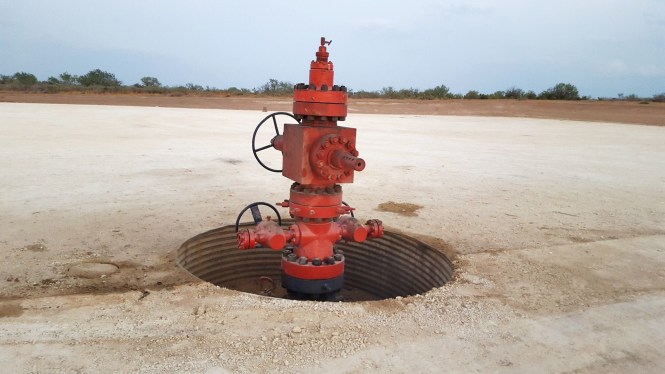 It was a huge area, that had been filled with gravel and compacted to make a huge flat area.  Dead center was the oil well. 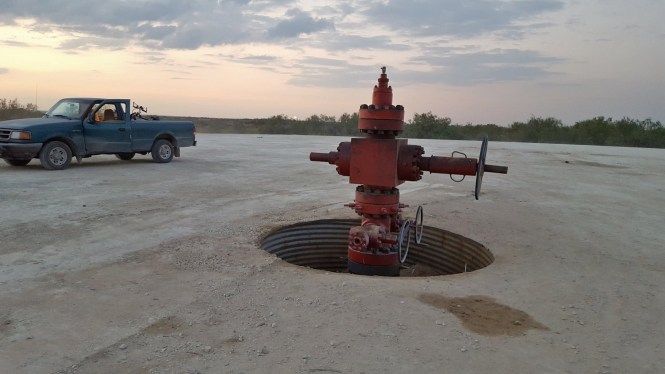 That is all there is too it.  I don’t know what I expected, but everything was cleaned up and gone….Just like that….In the distance, you can see a light….That is our gate area.  Notice how dirty the truck is….lol…So now we wait…………….Nobody has said anything to us, and when we ask, every one has a different story, from…..”We Don’t Know”   to   “They are bring in a new huge rig to drill a new well.  Their going to concrete this one over and move over on the pad and drill again.  You haven’t seen nothing yet”.  So we don’t know what to believe.  We now have a supervisor that comes in and checks every morning.  That’s it.  We sit here and Rich sleeps in the recliner, just in case, cause that’s what were being paid for……lol….easy money….In the mean time, they have been working on the road right outside our gate.

It is nothing but sand.  When the wind storms kick up it is terrible.  So the other day, a road grater, water truck came in and started watering down the road and plowing it.  Next thing ya know gravel trucks were lining up and dumping gravel.

They all turned around right outside our gate.  I don’t think I would be overestimating at over 75 trucks came each day for 2 days. 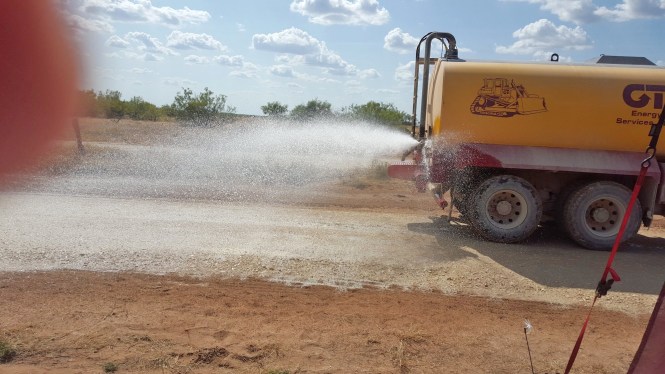 The water truck was continually watering the road and backed into our gate and the neighbors and kept us watered all day.  That really helped keep the dust down.  So I think most of that is done and now we have a much nice road to drive on.  But as I think about all of this expense, it makes me realize about all the money it does cost to drill for oil.   We wonder why it cost so much at the pumps. We are getting an education.  First the Oil Company’s have to write contracts with the land owner.  The land owners can require guards on their property, and if they lease out their grounds for hunting, which many of them do, they can require during hunting season no drilling on site.  Then all the prep work.  We had Seismic people come in the other day.  They drive all over and test the ground for oil veins.  As the drilling starts, it seems like everything is contracted out with different company’s.  The Gate Guards are another company in it self.  The Electrical company’s bringing in the generators and spot lights for the gate guards, and for the drill site.  In fact the amount of generators and the size was amazing to see go through the gate.  The semi flat beds and drop decks, cranes, port a potty, and even a garbage trailer. All contracted or rentals with other company’s.  Even the workers were from several different company’s.   One guy told me that if you don’t hit oil in a drill site, its 3 million dollars down the drain.   So what Rich and I would like to know………..Even with all these expenses, how is it the Oil company’s still make all that money…..fascinating……They even have to build these roads and leave them in good shape, per the land owners contract……The money they put into the road back to the pad and to form the pad at the site had to have been a fortune.  On the other hand, the gate next to us has at least 2 or more trucks a day coming in to take out the oil that is pumped.  and I know that many days it is a lot more than 2……So now here comes the profit….lol…

So here we sit, just watching the gate.  We had been told about a blimp far away that was on the border.

We can see it at night.  It is a white blimp that is tethered at all times.   It sends down readings and the cameras view the land for many, many miles.  It helps them to catch the illegals coming across the border and to confiscate drugs.   It guess it is doing a great job, and they will be putting in more across the border in the Rio Grande Valley.

If you look closely at the picture it looks like a fish…lol…We were thinking we were closer to the border than we had thought, so today I asked the boss who came in to check, how far were we, he isn’t from this area, but he was told only about 10 miles…..Wow…..No wonder so many illegals here.  He said they caught about 10 several days ago.  He had one the other day jump out at him as he was driving cause he was ready to give up and wanted water.  So sad.   He said many of them are found dead.  I so believe that. 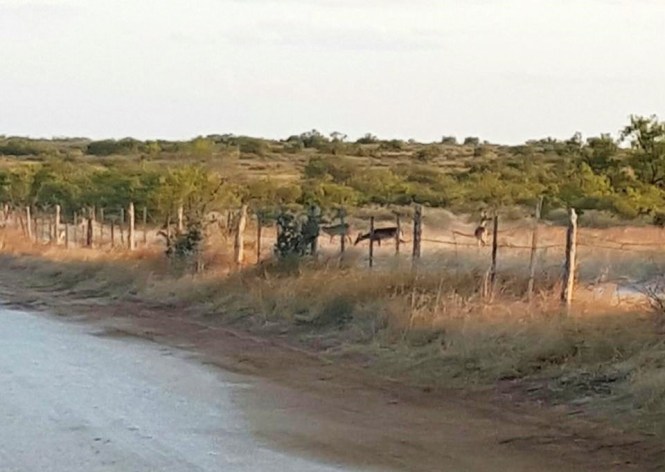 We have been sitting out side at dusk enjoying the nite life.  The skunk hasn’t been back in a few days.  Many deer are around.  We seen this herd of about 6 deer. 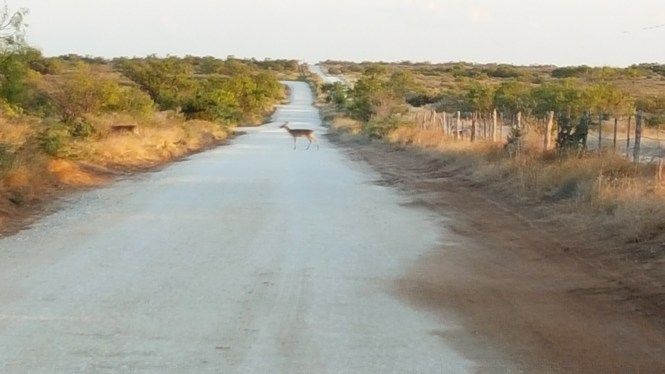 Then they just slowly walked across the road one by one….You can see one already in the bush on the left, one on the road, and several more still to cross.

Then late one evening, this one just came slowly eating and walking right across the road from me.  He looked at me

And then went on his way and out our gate……And we also have many, Many, MANY Rabbits……

This little guy was right in front of us the other nite.  He just looked at us.  I went in a brought out some lettuce….He didn’t even leave….but he didn’t want my lettuce….He was eating all the yucky dead grass…..So many rabbits play in the morning and evening hours.  You can see them all up and down the roads…..Late evening and morning are the coolest times……Now how do ya like this temperature……This picture I took inside the sunscreen in the shade….

One thought on “Labor Day Weekend in the Desert…”