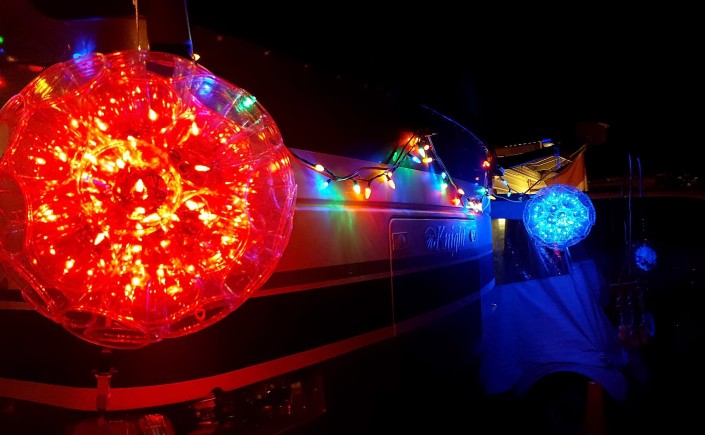 Where has the time gone.  My last blog was Nov. 22, the anniversary of President Kennedys assassination.  We have been so busy at Eastgate.  So much to catch up on.   Soooo……….Lets get started.  I do think it will take several blogs…lol…

We have been so busy, and the weather has been great, up until last week.  The temps have been from the 70s to the 90s.  Plenty of sunshine.  Rich is busy everyday.  He plays pool in the mornings and then begins his day.  Always plenty of repairs.  Eastgate has more workampers this year, so the work is getting done at a faster rate, but theirs always things breaking and many things to replace.  Always water breaks….When the park has a leak that requires the water to be shut off,  Victor, the maintenance man rides the golf cart around, blowing the siren.  That means the water will be shut off in 15 minutes……lol…Guess what,  that even broke….lol…someone had to ride around in the golf cart shouting……”Water Shut Off”…..Water Shut Off”….Funny…I guess you had to be their to hear it…..Now we have a New Siren too….

The Craft classes have been very busy.   We have made Sparkleballs from Christmas lights and Solo cups.  They have been so popular, that we keep making them over and over.  We will be making some more after the rest of the people come for the winter. 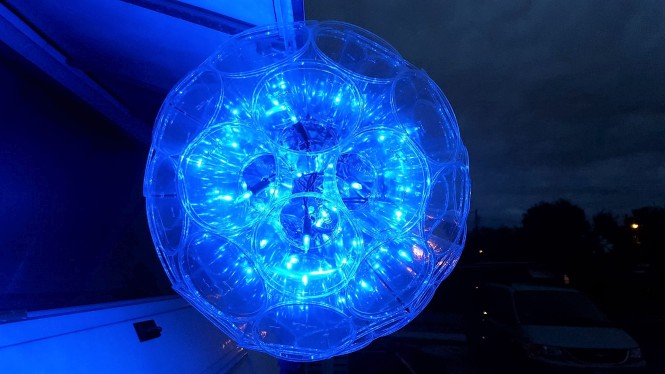 If your interested in making them the web site is,  sparkleball.com. 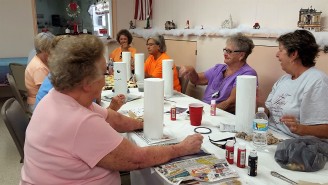 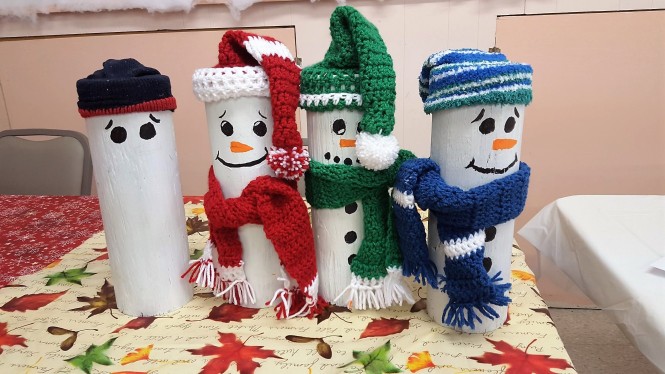 SOME OF OUR CUTE SNOWMEN, ALL BUNDLED FOR WINTER

We also have made log snowmen.  We bought 7′ posts and cut them into 1′ sections.  painted them and dressed them with hats and scarfs.   They turned out so awesome.  Everyone had different ideas on how to paint faces and dress them with the hats and scarfs.

OUR SPINDLE SNOWMEN IN PROGRESS. WE PAINTED HIS HAT BLACK, GAVE HIM A FACE AND BUTTONS AND A LITTLE SCARF FOR HIS NECK

The 3rd item we made, was snowmen from railing spindles.  I had over 20 the garage for years that came used from an auction.  I seen a picture on Pinterest that would be easy to do.  We cut them to length, and added the hat to the top and painted them.  A hole was drilled in the bottom and rebar was inserted. 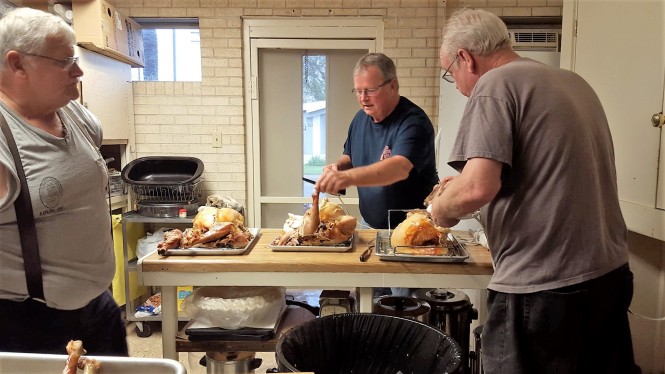 OUR MAGNIFICENT COOKS, RICH, CAROL AND LARRY, SUZI AND BOB ……I CUT UP THE ONIONS….LOL….

Thanksgiving and Christmas have come and gone.  For Thanksgiving, we cooked 7 Turkeys, dressing and gravy.  The rest was supplied by the residents.  Each table has a card table at the end.  Each table holds 8 people.  They bring a dish to pass for their table only.  It is put on the card table.  One person from each table goes up to the kitchen counter and receives a plate of turkey, dressing and gravy.  That is also put on their card table.  Each table therefore acts as the family unit, as they pass their food from the card table.  It saves time, and everyone can almost eat at the same time.  If it was served as potluck fashion, many of the best dishes would be empty before everyone was served.  It has worked out so well.

For Christmas, we served Ham and glaze.  7 hams were purchased and almost nothing left.  We had 15 tables for Christmas.  The table decorating contest was a Great success.

THE WINNING TABLE DECORATING CONTEST…..NOTICE THE CRAYONS AND THE COLORING TABLE CLOTH….VERY ORIGINAL…AND THEY CALL THEMSELVES SENIORS?

Our neighbors, decorated their table in a very pretty, entertaining, and JUVENILE manner…..lol…They had a kids coloring table cloth with crayons and all.  They colored through dinner and guys wore silly hats.  They won a bottle of wine…as if they needed it.   They are a riot whether you see them around the park, or at the dinner table…..

BARB….WINNER OF THE UGLY SWEATER CONTEST…..A HOMEMADE BADGE FROM EASTGATE WITH “UGLY SWEATER WINNER 2015” AND RIBBON 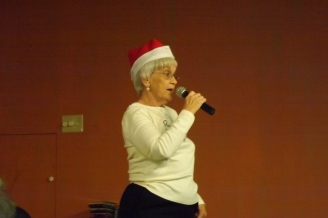 The hall was decorated so festive.  Many of the residents got together one Friday morning and got out all the decorations and the tree.  We turned on Christmas music and turned it up and away we all went.  It was so much fun to be a part of it and watch them enjoy the Christmas Spirit in the Air. 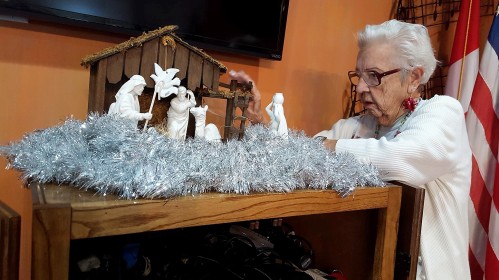 Another craft project we did for both halls, was to make paper snowflakes.  I seen it on Pinterest, and made one.  It was so easy.  That after noon we made many more.   I takes 30 sheets of computer paper.  5 sheets for each point.  The reasoning is to make it thick enough to hang and not rip.  They ended up well over 12″ in diameter. 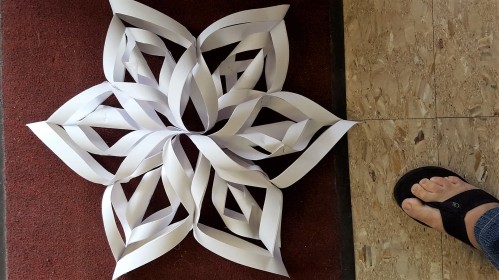 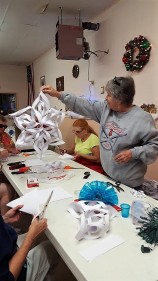 I have also scheduled some activity’s that we have done.  We have had several Segway tours of downtown Harlingen. 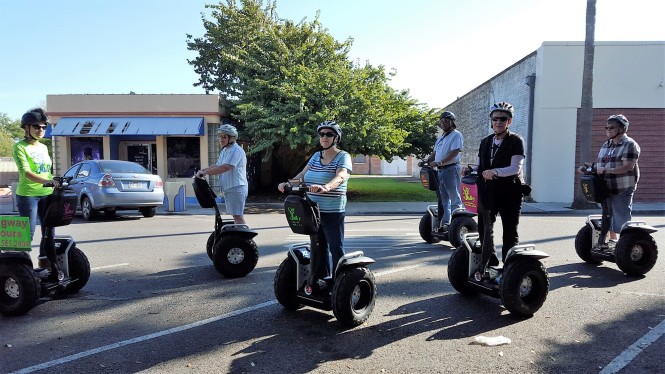 Their is so much history in this town and the art work of hand painted murals are all over town, depicting to history.  One of the most magnificent pieces is in a park.

A special area has been constructed for it.  It is a collection of 905 mosaic tiles that tell the history of Mexico.  It is stunning and beautiful. 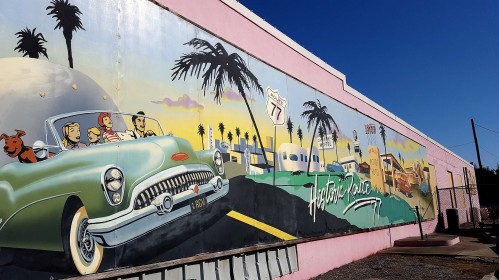 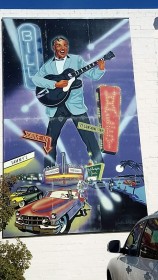 HOME OF BILL HALEY AND THE COMETS…ERA 1950S 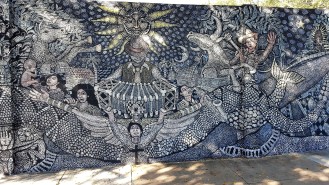 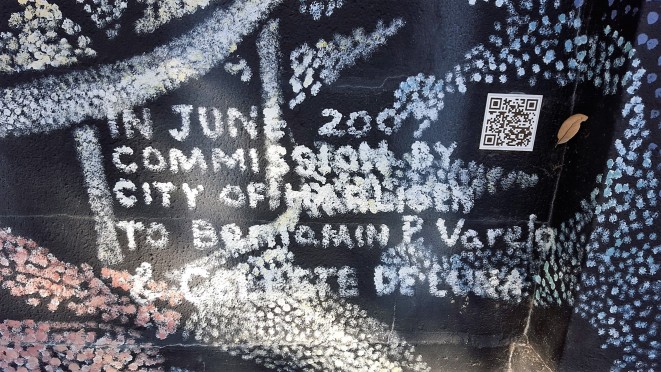 One of my favorites…This mural covers almost a half block area on a wooden fence.   If was painted black and then painted with dots….Its magnificent.. The artists are Benjamin P. Varelo, and Celeste De Luna. During the Segway tours, we visited these murals, and many others and are given the history of the town.  It also takes us to Grimsells which I have written about before.  It a fabulous garden Center that is over 100 years old, situated almost in the middle of down town.

They have the tallest flag pole in town, so if your looking for its location, just look up over the buildings and look for the waving flag of the United States of America, and you can make your way to Grimsells.  This last time we were their, they had their larger birds out. 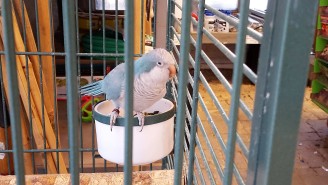 About a week ago, 16 people from the park, carpooled downtown for the 1 1/2 walking tour.  It was a fun time.  We had 2 guides that walked us through the downtown area using a megaphone to tell us the story.  After we had lunch at a local Café.  We learned a lot more history as well as we found many more cool stores and boutiques to shop at.  One never gets tired of shopping do they?  lol…..These are just a few of the things we have been doing……