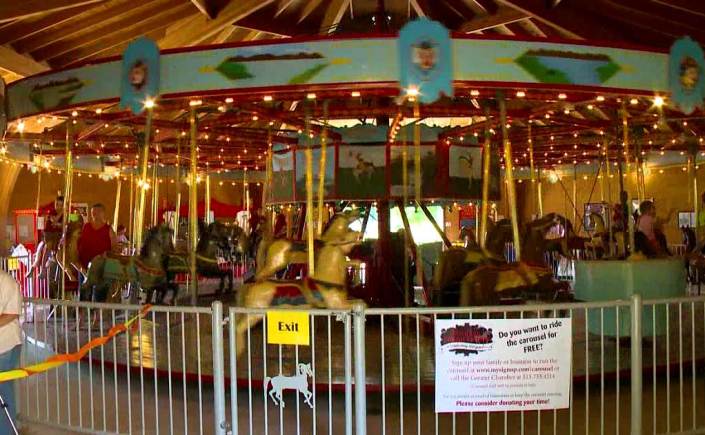 This is the second part of our visit with friends Rita and Ed Frette of Story City Iowa.  After we visited Reiman Gardens in Ames, we rode with them 10 miles north to their little town Story City.  It is the home of an original 1913 restored Antique Hershell-Spillman Carousel.  The population of Story City is a little under 3,500 residents.  It is really a neat little town.  Ed drove us all over town with Rita being our tour guide.  It is a really pretty town full of beautiful full grown trees lining the streets and homes.  Plenty of shade.  Many older homes that have been restored and the yards are full of shrubs and flowers, neatly maintained.  They even have one Blvd street, and downtown their is parking in the middle of the street, as well as each side.  I would think that today with some of the larger vehicles, I would be afraid to park their as I might stick out front or back and get hit……The Story Theater/Grand Opera House  is the oldest continuously operating theater in the Midwest.  It is listed on the National Registry of Historical Places. 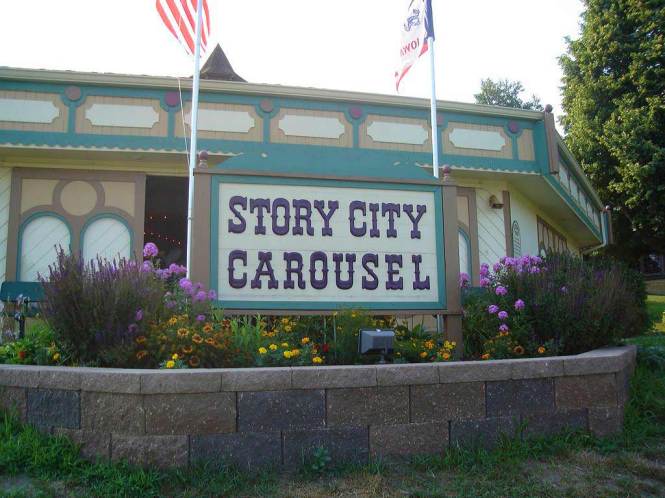 Finally Ed drove us to North Park a beautiful rolling park.  Up on the hill was this building which is now the home of this Beautiful restored 1913 Hershell-Spillman Carousel.  It is operated daily through much volunteer help from Memorial Day to Labor Day for a fee. 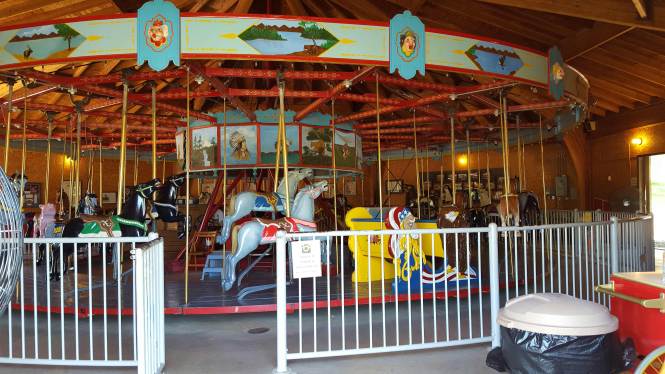 As we walked in, it took you back in time to when you were a kid.  The volunteer was their selling popcorn…uummmm….. the smell.  They sold T-shirts and souvenirs.  The building was round like the carousel and all along the walls it was full of pictures and info about the history of the town and carousel.  I walked around it and was amazed at the beautiful colors of the horses and animals.  The lights were not operational at this time, but 2 girls came in and wanted to ride.  They chose their horses and the carousel began.  The beautiful calliope tunes began as the merry go round started to twirl and the horses went up and down.   It was like a fantasy land for awhile. 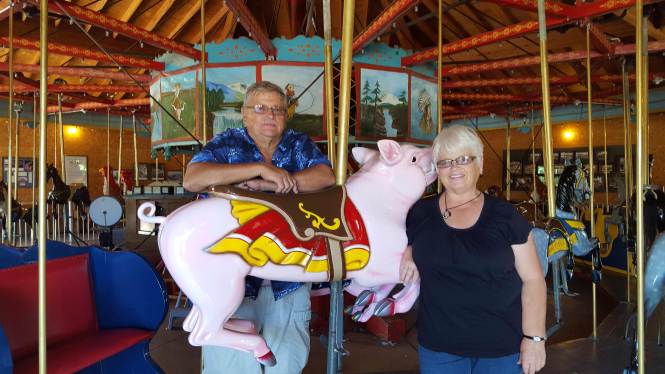 This Merry Go Round is in the North Park, next to the new swimming pool they are building.  It is also situated along the beautiful Skunk River.  This park is the center of many activities in town through the summer.  They are of Nordic decent and hold a Scandinavian Festival, also story telling as well as other festivals or celebrations  with the Carousel being part of the Celebration……Now the History…… 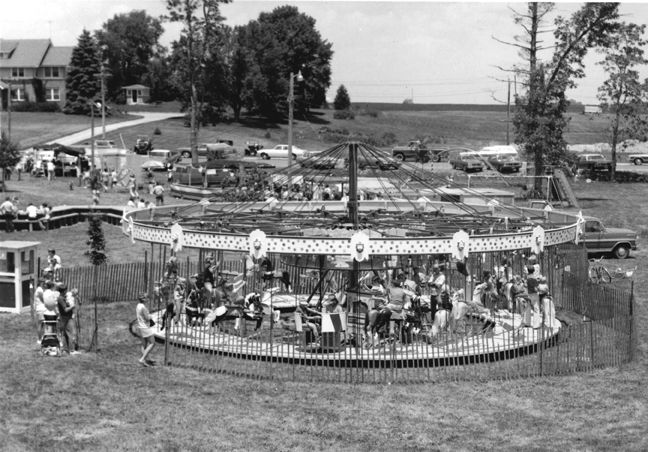 One of a vanishing species, this fun machine was built in 1913 by the Herschell-Spillman Co. of Tonawanda, New York. It was originally owned by P.T. Gifford of Grundy Center, Iowa. Gifford traveled the Iowa countryside taking the carousel to county fairs and town celebrations, including Story City’s Independence Day galas. The splendid wooden figures are hand-carved from poplar and include 20 horses, two chickens, two pigs, two dogs, two chariots, and a whirling tub. Calliope tunes are generated by a 1936 Wurlitzer Military Band organ housed in the center of the carousel. 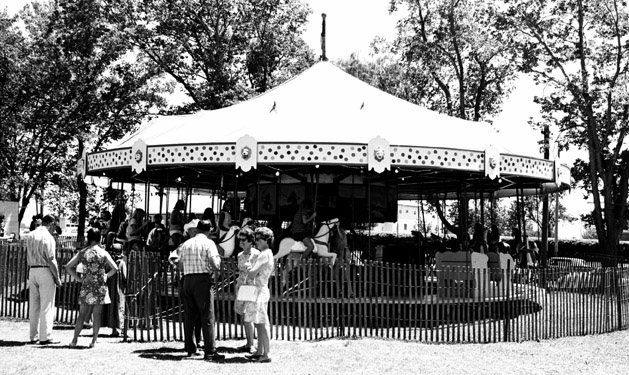 Now Ed’s Dad was a prominent businessman and he convinced the town to buy the Carousel.  They all thought he was crazy to spent $1,500.  They set the Merry Go Round up at the next event in a neighboring town, and made all the money back immediately.  Of course they quickly changed their mind and decided it was a great investment.  The carousel was purchased from Gifford in 1938 by the Story City Greater Community Congress.   Eventually, time and wear took their toll, and the battered steeds were forced into temporary retirement in 1977. 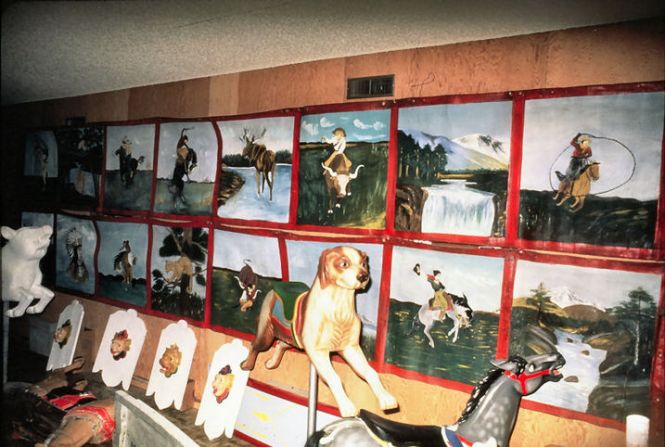 In 1980, interest in the old merry-go-round was resurrected, and restoration began at The Country Shop in rural Roland, Iowa. Layers of paint were removed, repairs made, and original colors of paint were mixed to match the old shades. 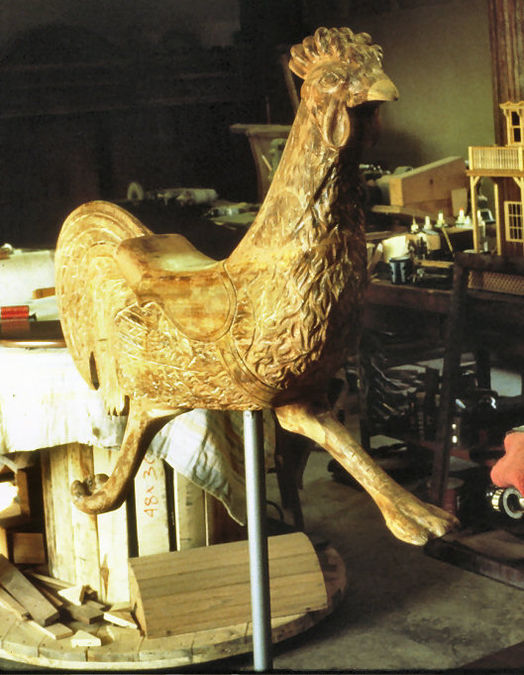 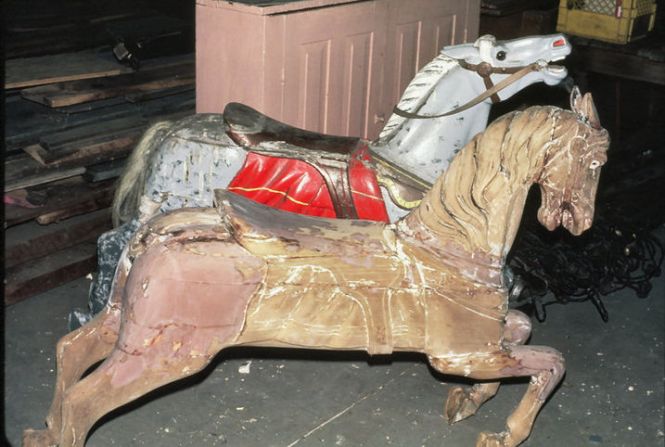 After one and one-half years, the original stencils, colors, and prints were completely restored to their present gleaming condition. A special structure was built to house the carousel, and on June 4,1982, a dedication was held. 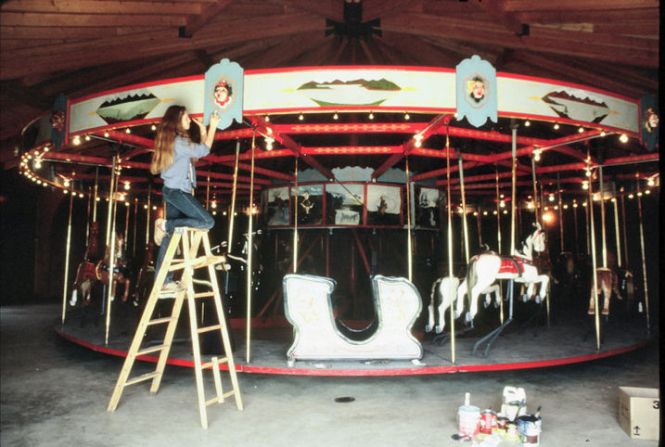 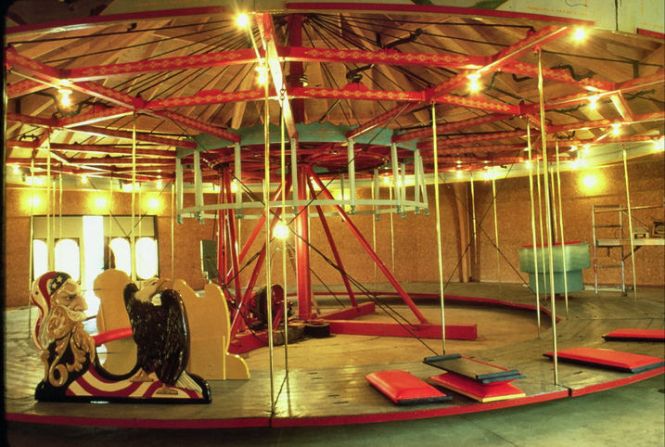 This was the painting and the assembly of the newly refurbished Carousel. 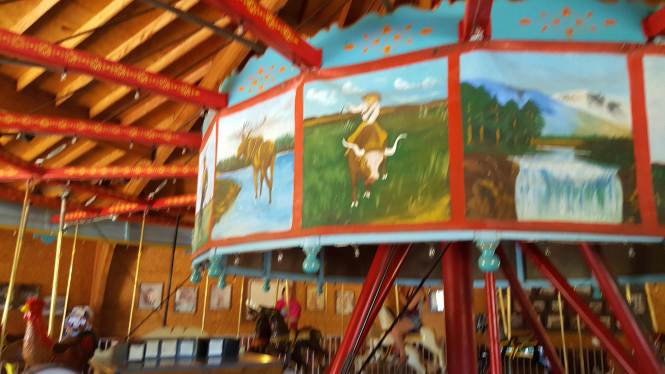 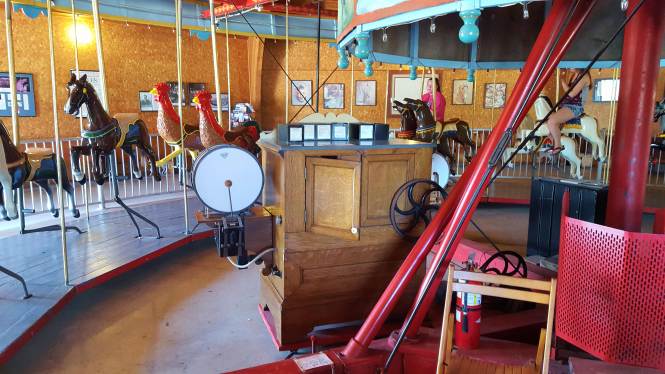 Some of the murals and the Wurlitzer Organ sitting in the middle…. 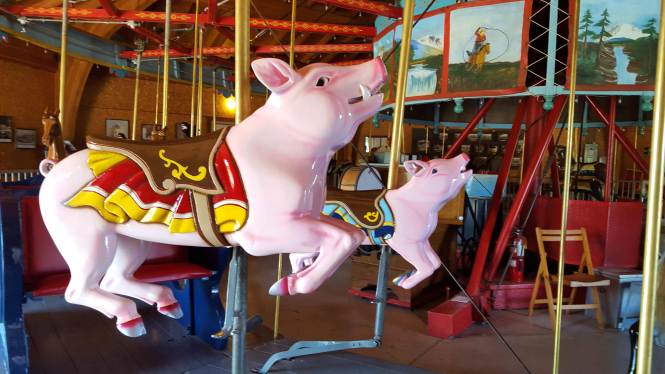 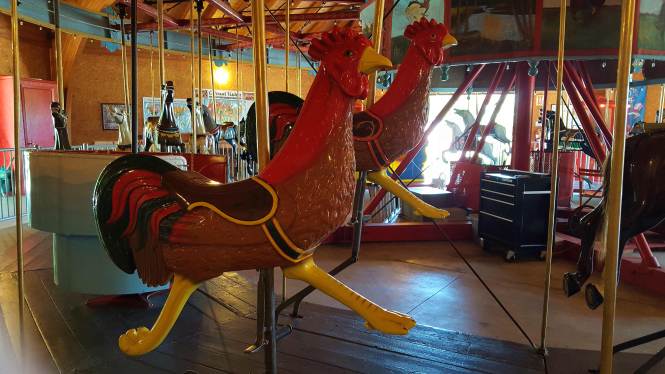 Since then this Carousel has been entertaining generations every summer.  In 2013, they had a Celebration as the Carousel was 100 years old.  It’s just amazing that it continues on a daily basis to operate and entertain anyone who wants to come and buy a bag of popcorn and take a leisurely ride back in time.  I’m sure its made so many memories through the years.  Every winter they take the horses and animals down and pack them with care.  Any repairs necessary are made at that time.   Such an Amazing town that is full of love, care and pride of something that is so beautiful and unique. 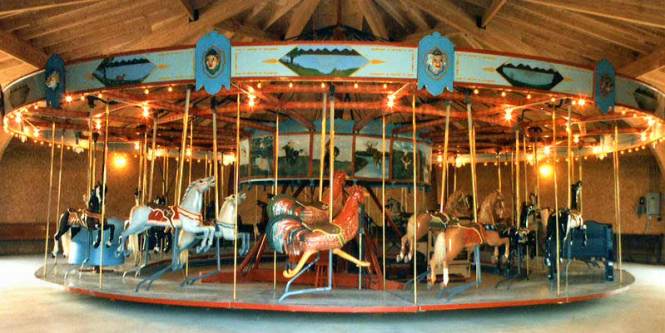 Our next stop was their duplex.  They have down sized now as we all seem to do.  This is a really cute duplex perfect for a couple.  After some visiting and watermelon, we checked out all her Hostas and Ferns they had just planted.

After that, Rita and Ed drove us back to Ames.  We stopped at Hickory Park Restaurant.  It was so busy, but amazingly we were seated fast.  It has a very rustic appearance.  Its menu is wonderful and full of barbeque items.  I highly recommend it and will go back sometime.  Of course we left with leftovers.  Way to much food.  Finally back to the truck and drove back home.   Still daylight….lol…. 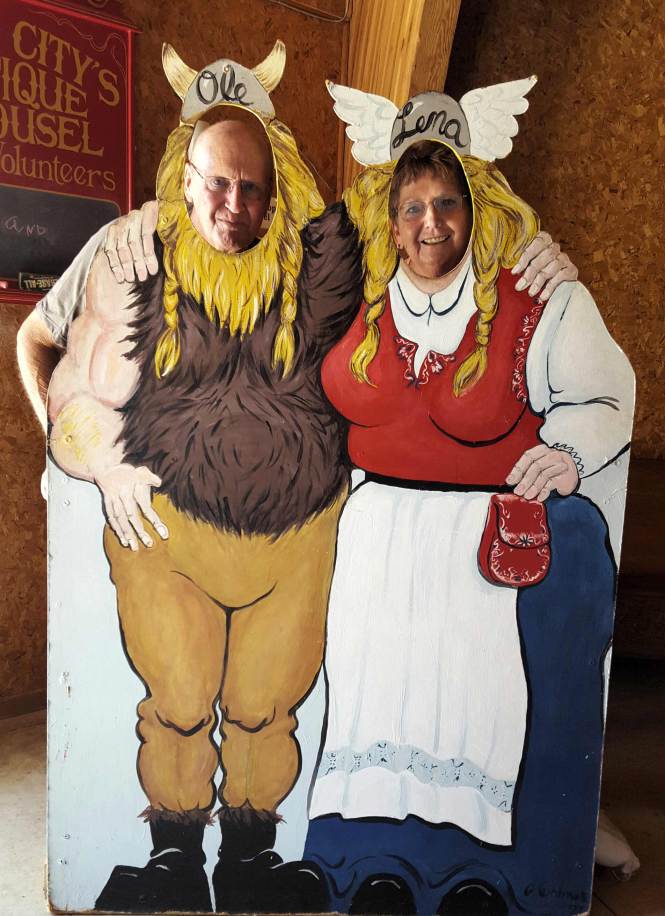 Thank You Rita and Ed….