Labor  Day weekend was the last big FLING at the park for the year.  We worked all 3 days.  I worked doubles being it was the only hours you can have now.  Saturday and Sunday was 10 am. – 10 pm.  It was a long day but the weather was beautiful.  The temperature was high 70’s and low 80’s. “A PERFECT WEEKEND.”   On Labor Day Monday, the park was open 10 am – 7 pm.  The park was full of people.  It was the last day of Adventureland Bay.  The water park will be closed for the season, but the Adventureland park it self will be open weekends till the end of September.  We were busy all day and evening.  It was sad on Saturday evening to look out and realize that we wouldn’t be seeing the lights of the “Monster” in the beautiful park anymore.  The sights and sounds of the park are just magical at nite.  The beautiful colors of the twirling rides, and the reflections of the buildings and lights in the lake by …..Dragon……

We will be closing earlier now on weekends and it will still be light. We had decided to take off the following week end and head home for a week.  The one problem was the cat.  Kitty has never road in the pickup.  Also he had no place to stay.  Tammy said he could stay their as it was his house, but she has a big dog “Chaos” and a cat “Charlie”.   But that was what we decided to do.  The nite before we went to Dairy Queen and took him for his first ride.  Kitty was curious, but we thought that was all it was.  When Rich opened the door at Dairy Queen, Kitty ran out the door.   OMG.   I panicked, and ran for him.  He went up by the building and under the picnic tables.  He was near the drive-up but their was a railing up that intimidated him.  He could have went through it but he backed away.  Finally we cornered him under the picnic table.  The next day we took off for our 4 hour drive.

I put his soft harness on.  He again was curious.  He was nervous and kept walking around.  Finally he settled down under Richs feet while he was driving.  Half way into the trip, we decided to stop at a rest stop.  I took him out and hooked up his leash.  I kept walking towards the bushes and fields.  It was really hot and he started panting.   Took him over to the water hydrant and he wanted no part of that.  lol  Finally took him back to the truck, tried to give him some water and he wouldn’t drink.   So we headed on down the road.  …….Poor Kitty…….

He was so tired and exhausted.  I think he was actually dehydrated and exhausted by the time we got home.  I carried him in the house and he ran for the bedroom and went under the bed.  That was the end of him for several hours.  I got his food, water and litter pan all set up and we closed the door  so he could rest alone.  I stayed at Tammys and took her bedroom that night.  He climbed in bed and was much better by morning.  In the morning we were all in the living room and Chaos ran down the hallway.

He is part Lab and Pit Bull.  I was worried about him hurting Kitty.  Tammy ran down the hall as the dog started running and barking.  She SCREAMED…..”Mom, come get Kitty, he just got TWICE THE SIZE that he was…..lol..lol…She was worried about the dog and she was afraid Kitty of sink his claws in her dog.   Well poor Kitty just set the dog straight…..He said,  “I am BOSS, this was my house first.  Stay away from me”…..It was really funny.  Later we let her cat up from the basement. 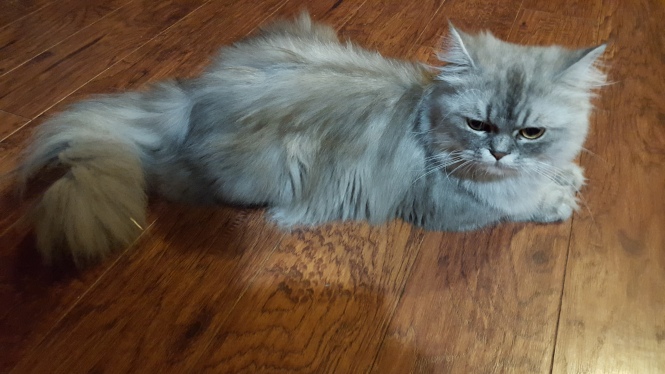 His name is “Charlie”.  He is a beautiful Persian.  Now Charlie was curious and wanted to play, but soon found out, Kitty does NOT PLAY.   He is an OLD MAN.  They had a few scrapes but managed to be respectful.  I kept seeing Charlie staring at him around corners and across the room.  By the time we left, Kitty was walking fairly freely through the house.  I was really amazed.

This is “Dexter”, Tina and Ed and the kids dog.  He is a Golden Doodle who is going on 2 years old.  He is a very loveable and active dog.  He is almost like another “son”  in the house.  lol.

Now Brandy and Scott have 2 house cats.  Both came as strays.  The yellow is “Seymour”, and the gray is “Clyde”.  lol.   Seymour has finally become lovable, but Clyde really likes to hiss at you.  So these are all the animal cousins…..lol…..

One day, Tammy went to work and forgot some papers, so Carly and I went to Peoria.  We got to tour the Kindred Hospital and seen where her momma works.   Carly loved that.  Then we went to Steak and Shake. 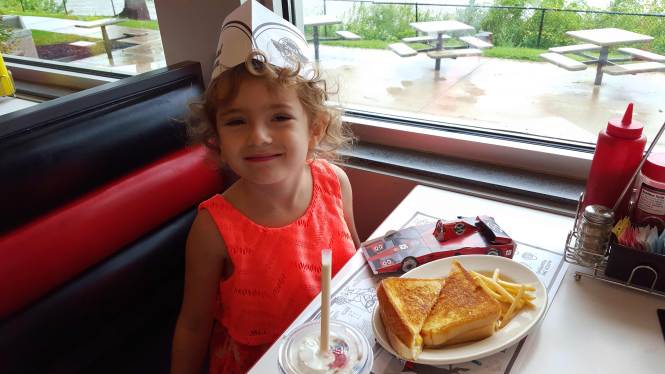 Tammy said she would know just what she wanted by the pictures and she did.  We had to sit by the window by the Illinois River.  I had gotten some stuffed animals at the park for the kids so we gathered them together to give them out.  Cassidy didn’t make it, as she had went to her friends. 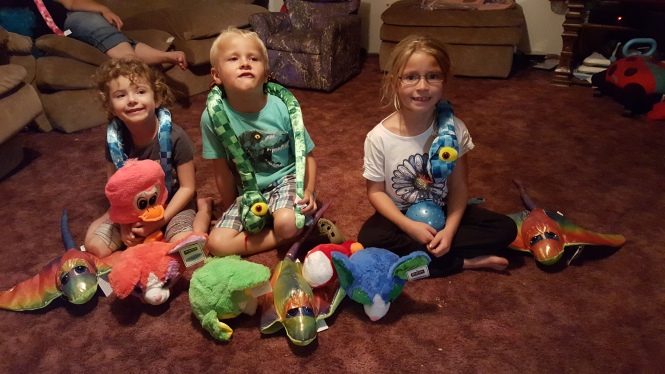 They had fun.  Carly is far left, Austin, and then Miley.  Around their necks, you can see a stuffed snake.  I got Cameron a huge snake.  He has wanted to buy a real Python in an aquarium for his room.  I told him if he ever did that, I wouldn’t go in the house again.  So “Here is your snake”…..lol…..The only one I allow.

He is a hard one to get a nice picture, but I managed to get this one uptown.  He’s doing what he does best…..driving….lol…Rich had his own agenda of fixing things.   Theirs always things to fix when we go home.  He also goes through the garage putting tools and things BACK WHERE THEY BELONG….Hmmmmm….Now why is that…..I also got a Biker Bear for Scott for the Bar.

He was so big.  I looked at him for a long time, hanging in one of the games.   Finally I bought him.

He was so BIG, he had to sit in the passenger seat with Rich.  I sat in the back and held him up.

So here he is in his new home.  “One Paw’z Pub”…..McNabb, Illinois.   He’s going to be nothing but a BARFLY….lol…That weekend was also “ONE PAW’Z PUB’s”Pre Harvest Hoe Down.  Scott and the local Car Club had the Main Street blocked off.  He had a Band staged on his flat bed truck trailer.  Around 70 cars showed up for the Car Show.   Some Beauty’s’  That will be the next blog.   We left to go back on Wed. so we could have 2 days off before the weekend.  Groceries were needed and laundry to do.   And ya know we don’t have to move fast anymore, so 2 days to rest up is Wonderful.   I went back to Tammy’s that morning as we have been staying at Scotts, and put Kitty’s harness on and carried him to the car.  He was such a trooper all the way home.  I think he now realized it was ok.  He slept, although his space was not to big, but he didn’t get upset or anything.  He was fine.  We were all glad to get home.  Kitty walked in just like he was glad to be home from his vacation.   So Poor Kitty at 16 is still learning new things.  He learned how to ride in a pick up.  He learned how to live in his old house for 8 days with a dog and cat that had invaded his house.

This is his new thing to learn.   How to go outside in a pen and not wander.  Now this is a problem.  He doesn’t understand yet.  He walks in circles and thinks he should be out under the motorhome……Not a Good Place for Him……

We are Winter Texans in the Rio Grande Valley