December is almost over, in fact it might be after I get this posted….lol…We’ve done so much in the park already.  The park is almost full.  Some have driven or flew home for the holidays, including Canadians.  They are starting to return now.  After January 1st, they will all be back.  The ones who don’t come till after the holidays will probably all come by next week.  We’ve been ……BUSY BUSY BUSY…..We scheduled a Downtown Historical Jackson Street walk.

It was a beautiful day.  Harlingen offers this tour every Saturday to the public free of charge.  Over 20 murals to see, and so much history.  We did this as an Eastgate tour.  Its so nice for everyone to be together.  Lunch after of course.

Racheal from SegValley Tours came for Coffee and Donuts and brought one Segway.  After her demonstration, she invited everyone to try it out in the parking lot.

Margene who is 84 and her daughter Kathlynn, and Rachael, owner of SegValley Tours

So much fun was had by all.  This was their chance to fulfill their bucket list.  Next we had our Annual Golf Cart Christmas Parade and after was Ice Cream and Singing Carols.

The carts were all decked out in Christmas lights and decorations.  A group of ladys walked ahead of the carts dressed as the Reindeer and sang Christmas Carols.  They traveled all over the park ending at the hall for the rest of the party.  Of Course Santa was their too…. 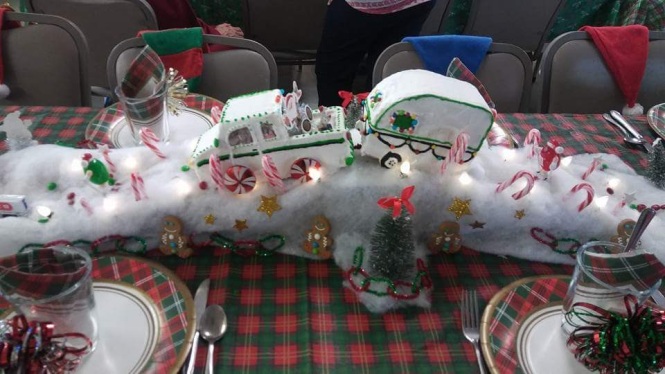 We had our Christmas Dinner, with platters of ham and everyone bringing a dish or two to serve at their table.  Also the table decorating contest. 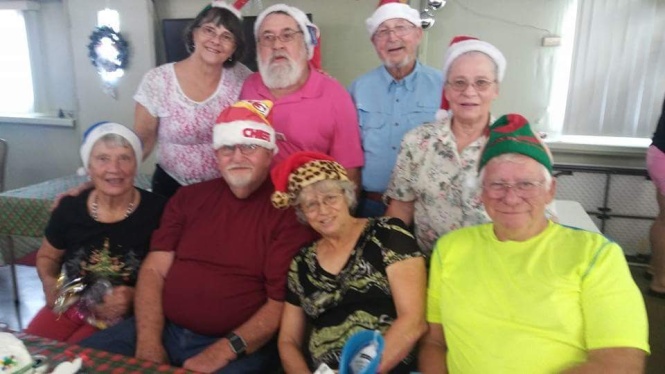 They all out did themselves this year.  The tables were beautiful, from fun and festive, to beautiful and elegant.  This was the first place winner.  Great group of people who put so much effort into their Gingerbread Truck and Camper.  The hill was also lite up with lights.  Awesome Job. 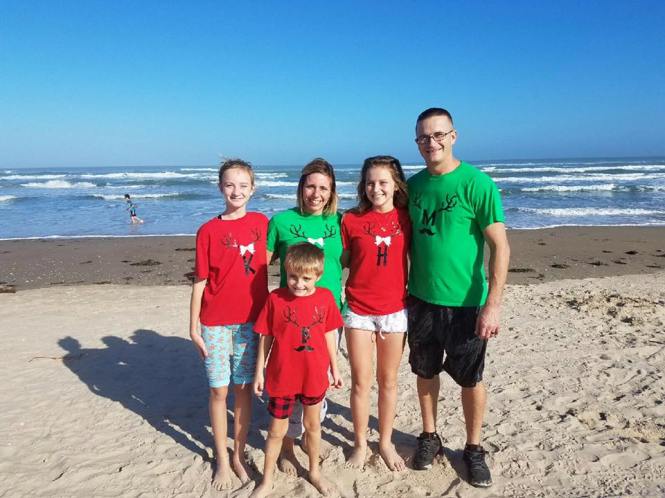 Rich’s brother John came down from Illinois to be with his daughter and family from New Braunfels Tx.  Its about 5 or 6 hours away.  They met down on South Padre Island for Christmas.  We went down the following day and spent the nite.  Misty, Mark and the kids had a great time on the beach.

They enjoyed fishing on the jetty.  The fog was pretty thick that morning.

You could see it just come in and blow through the island.  It was hanging pretty low.  This was an awesome picture of the fog covering the lower part of the hotel.  The top part just appeared out of the fog like a ghost.

Also the  Pirate Ship cruise went by.  It was rather spooky too with the fog that was present.  They offer games and pirates fighting.  A very authentic feeling of a pirate ship.  After Mistys family went back home, John and Glenda came by and spent 2 nites.  We took them to Progresso Mexico for their first time every.

They had a great time.  It is quite an experience for anyone.  We sat down at the Red Panty Bar on the tables on the street.

Ordered a few drinks and Glenda took it all in.  Street musicians playing drums and trumpet as well as a man playing guitar behind us. 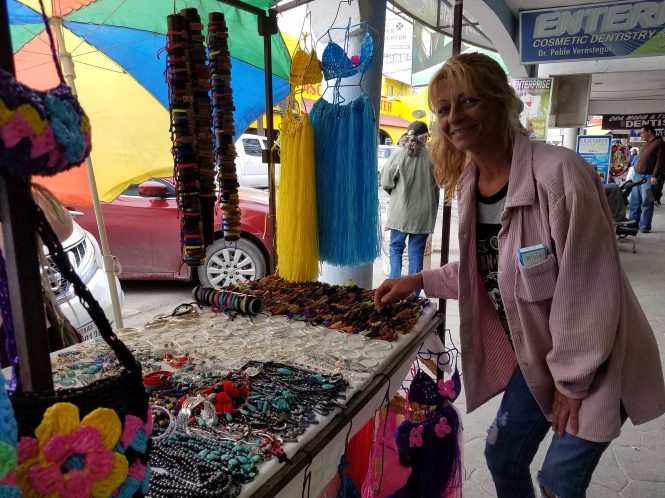 Now this is what every women loves including me of course…lol…..Shopping for jewelry from the street vendors. 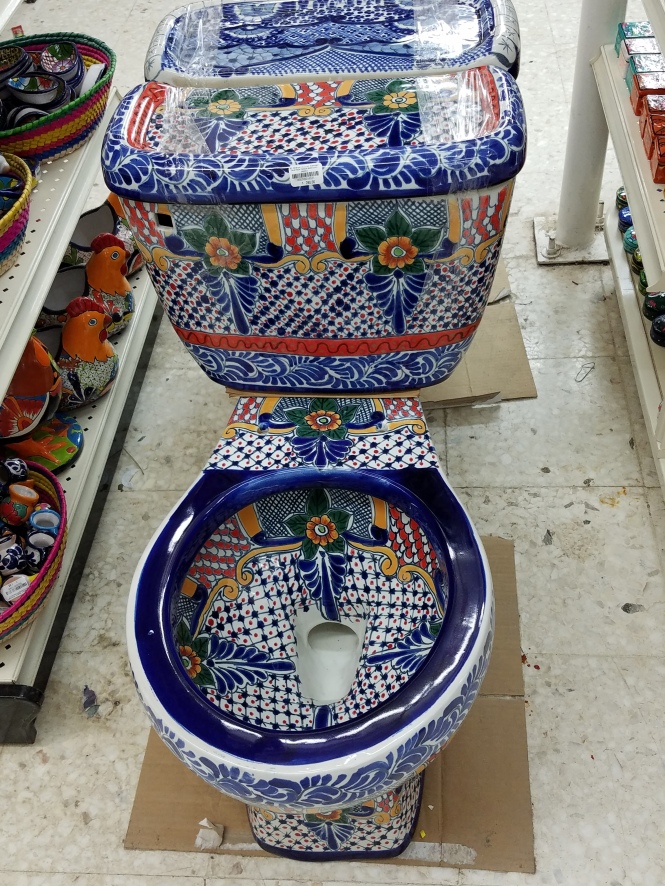 Now this was in a store for sale.   Beautiful isn’t it. The price on it is $250.  I love it.  Now if I had a house, …..lol….and a little extra money, I would certainly remodel my bathroom around this toilet.  They also have sinks…..lol.. The following day we went to the 77 Flea Mkt.  It is so big you can’t see it all in one day.

Rich did find a new pal.  This is for Scott and Brandy at the bar.  Were not sure if its a “Sally or Sam”….lol….Scott already has “Bones and Trixie”, so this will be a nice addition to the family.  We spent New Years Eve with a group of friends.

We spent the nite with a fire pit and Tom smoked a brisket…..At midnite the fireworks in town were huge.   They went off in all directions.  The next day we heard a lot of people woke up because of all the noise.  Happy 2017 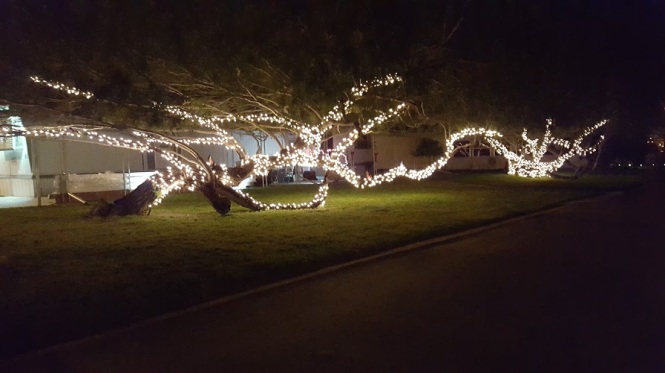 Some of the lights of our park.  This is 2 Mesquite Trees.  The owners have them decorated so beautifully.  They are near the entrance and give the park a great impression when you pull in…..

This camper is in the RV section.  It is beautiful and complete with music as you drive by.