We were making a small vacation of this delay in Oklahoma City, waiting for the Motor Home to go into the shop.  We had added taking a tour of the State Capital to our list.  Last year we toured the Iowa Capital in Des Moines and was so impressed.  It seems that all Capital buildings are open for either a guided tour or self guided.  We checked out GPS on the phone and found out it was near.  So off we went in search of the State Capital of Oklahoma.  Of course traffic these days around capitals seems to be one way with circular drives around the whole complex.  So if you miss your turnoff, around you go again.  So finally we parked right in front.  After asking questions we were told to park in the designated spots of the House and Senate.  Of course they were out of session.  That seems to be the norm. 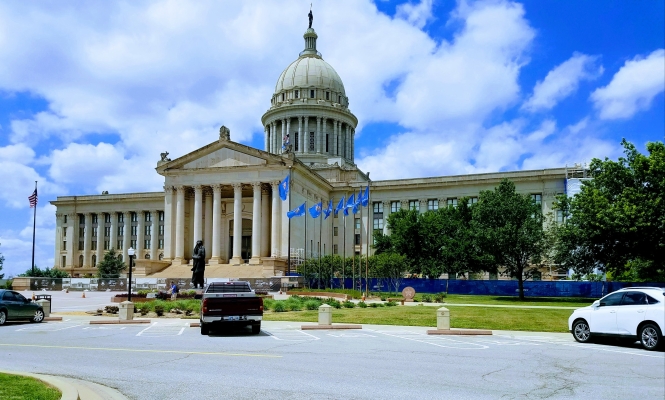 On the approach it also looked very stately with a Dome.  But it was not gold gilded like Iowa State Capital.  We found out later Oklahoma’s capitol was designed 95 years ago to have a dome, but the money ran out and the work was not resumed until 2001. So for all those years.  The building was just flat, looking very stately but no dome. 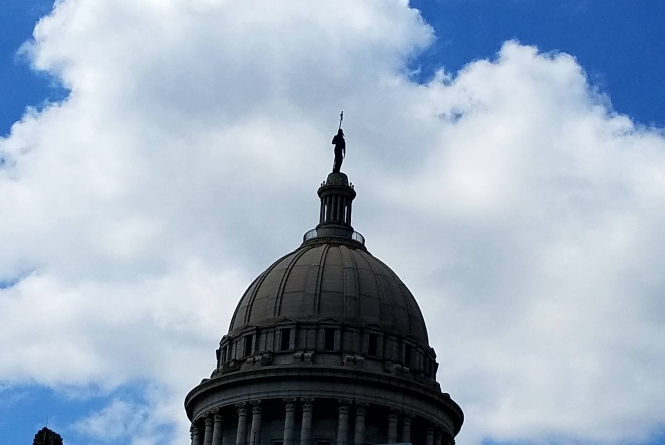 On the top if you look close is an Indian.  “The Guardian,” his body facing east in an Indian tradition and his face looking south, is 17 feet high but the entire structure, including a spear thrust into the ground at his feet, is 22 feet tall.  “The Guardian” is supposed to reflect Oklahoma’s heritage as the former Indian Territory. Nearly 40 Indian tribes call Oklahoma home, more than any other state.    Upon walking up to the building we realized that we came at the time of a major restoration, inside and out.  Scaffolding was covering a big portion of a wing.  We had boarded walkway to guide us to the entrance which was in the lower level.  Upon entering, of course we went through security and then on to the Visitor Center.  Their was a bunch of high school age kids and their teacher waiting for a tour.  We entered the very nice gift shop and visited with the very nice lady.  We had the option to tour our self or go with the group.  We decided to go with the kids as we might learn more.  A few minutes later our guide came and off we went.  Down the hall and up the stairs, turn, more stairs…..lol….Around the corner and look what we found. 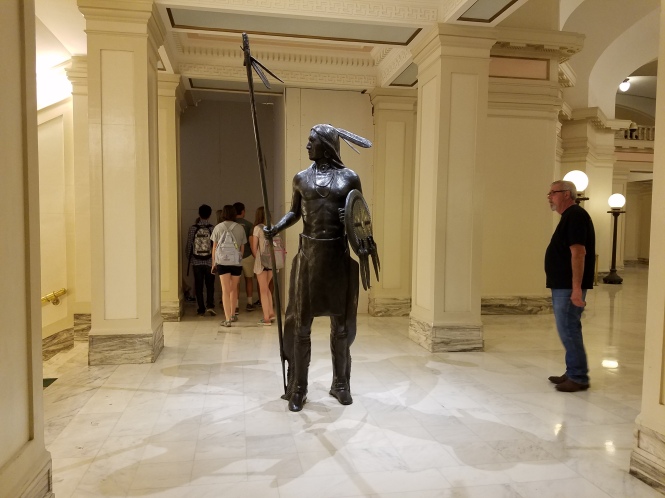 This is a 9ft.  bronze replica of the statue on guard at the top of the Dome.  On we went with the kids.

We came to a Beautiful Grand staircase.  We kept going until we came to the rotunda featuring the State Seal.

It was situated right under the dome.  You could look up through the circular openings in the floors, all the way to the top of the dome.

It was magnificent.  At the very top is the State Seal and if you look closely you can see different levels that have railings around them.

We walked up another floor, and looked down at the State Seal.  So impressive with all the granite everywhere.

Now as we were trailing the kids, the tour guide said, “Don’t you have any questions?…Did you bring your pens and notebooks?”……Of course,  No Response.  They were just their to do the tour and have a fun day out….Notice the railings in the rotunda are all beautiful marble swirled. 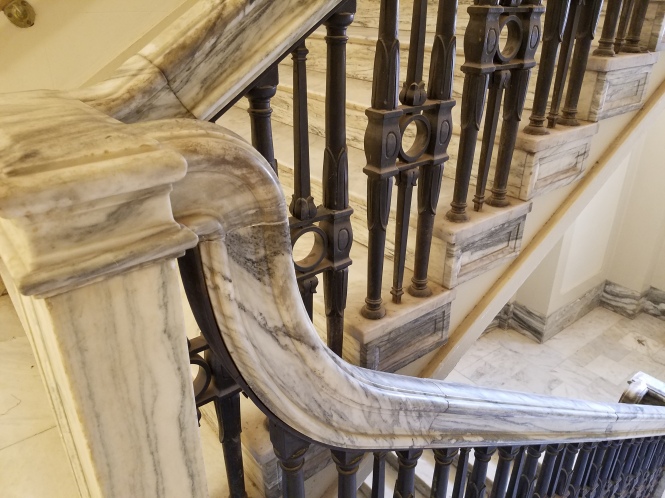 The stair railings were also all marble and wrought iron.  On we went.  The one thing we were disappointed in, was all the paintings or anything decorative and art items had been removed for remodeling.  So the walls were very plain.  But they were remodeling, so that was to be expected.

This  is what the rotunda looks like with some of the art and paintings on display.  Next we went to the Hall of the Governors. 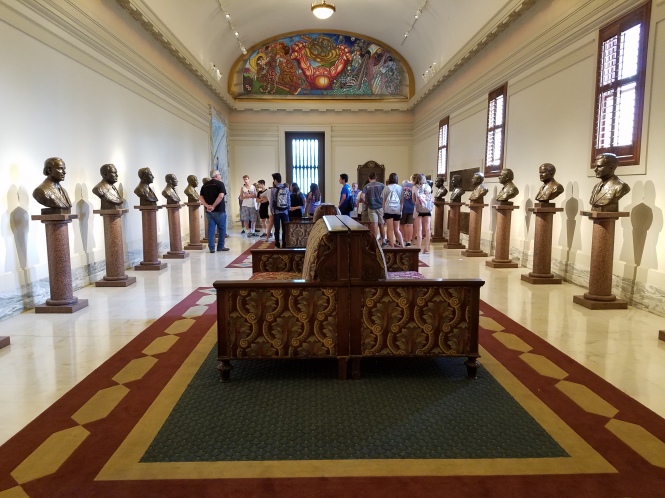 This room holds the sculptures of all the Oklahoma State Govenors.

This painting is my favorite.  It is called “Flight of Spirit”.  The artist is Mike Larsen, who is of Chickasaw decent.  It is just beautiful.

Here is another painting, depicting the history of Oklahoma.  The colors are so beautiful and vibrant.  Above is a stain glass curved window that lets light in

Next we went to the Supreme Court.  It doesn’t look quite at large as I thought it would be but it was interesting.  Our guide gave us some good facts that I already forgot….lol…Guess I should have brought my pen and paper.

‘Then on to the Senate.  The kids all sat at desks of the Senators as the tour guide talked.  You notice the balcony area,  it is open to the public to watch proceedings.  Some of it is glassed of so the noises of the news reporters cameras clicking are not heard.

Out in the hall we came across another beautiful mural depicting the history of the oil industry. 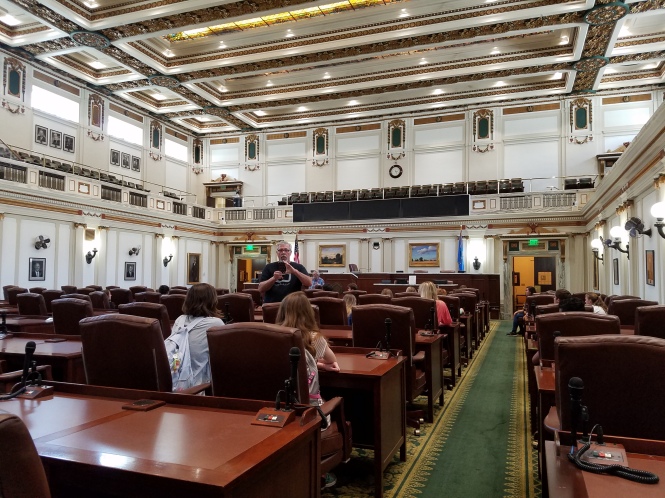 Now we entered the House of Representatives.  This time we were at the back of the room.  As you can see the balcony areas wrap all around the room.  If you look close, on the wall are the old fashion black bladed fans that are original and still can be used today.  The ceilings in both houses are stained glass.  At one time, they had been closed and sealed up to  make A/C more economical.  In the last decade, they decided to restore them to original.  They are beautiful.  At this time, it was the end of the guided tour.  We left the group and wandered a little our selves.  We finally left after about an hour and a half. 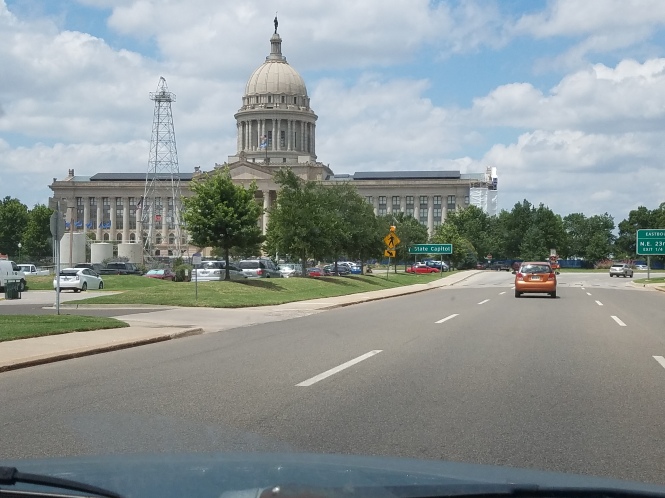 Located on more than 100 acres in NE Oklahoma City, the Oklahoma State Capitol is the only capitol in the world surrounded by working oil wells. One is even named Petunia #1, because it was drilled in the middle of a flower bed.   In researching, I found several interesting pictures from the past. 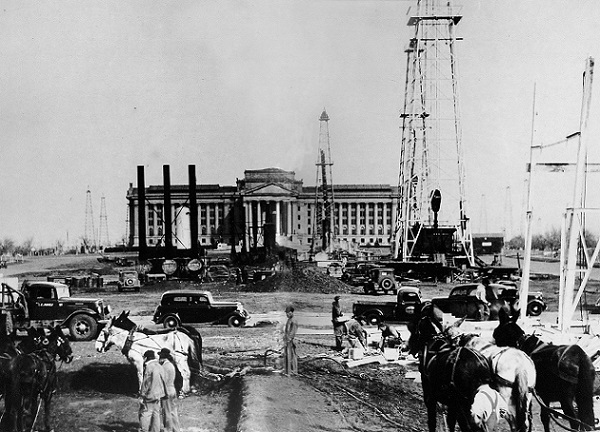 Another picture with all the oil rigs.  The capitol building is directly atop the Oklahoma City Oil Field.

Finally we headed back home.  We had 2 more days to enjoy.  I had wanted to go to Oklahoma City Myriad Botanical Gardens & Crystal Bridge.  It would have been so much walking, so we passed on that.  It was really hot so we just enjoyed the a/c, and did caught up on laundry.  We did so some shopping and found a Steak and Shake.

Steak and Shake design of today

Now for those of you who don’t know, Steak and Shake started in Normal Illinois in 1934.  I grew up not far from their.  I thought it was only a local or Illinois chain.  They have the best Steak burgers, Chili, Chili Mac, and Chili 3 ways and skinny fries.  They are also famous for their old fashioned shakes…..

When I was a teenager, they were drive in restaurants.  They offered curb service with carhops or eat in.  We would go to Peoria and cruise Main St.  Drive in and around Steak and Shake and back out again down Main.

That’s what everyone did with cool cars.  A place for the guys and the girls to met…lol….Now I have found out they are in over 31 states and International.  They are only offer eat-in or drive-through now.  When Peru Illinois first built theirs, Tina was just 16.  She applied and got her first job their.  She just received her license and drove to Normal to get her training.  She did that several weeks.  I was a little leery but she did well.  She worked their for quite awhile.  They are open 24 hours, so she put in some very late nights.  I can’t believe I let her work till 2 am sometimes.  I wonder if that is even legal today.  So long story short, we went in and had a wonderful dinner.  I had my regular, Frisco Melt with fries covered with cheese.  It is 2 Steak burgers with American and Swiss cheese on buttery Sourdough bread, grilled to perfection with their Sweet and Tangy sauce inside.  Rich had a Triple burger and fries.  Mmmmm Mmm…good food.

We had a nice relaxing time at the campground.  We noticed it was so windy their.  Every day it just blew.  Also right by the office was a huge concrete storm shelter.  Oklahoma has so many tornadoes, they have to be prepared.  I was also planning on going swimming in their indoor pool, but the nite before some little kid made a deposit in the pool…..lol….The manager had to clean and drain it.  So much for that.  Finally Monday morning, we were told to be at the Rush Truck Shop at 8 am.  We drove about a mile and entered the yard and got in line.   Well the 8 am appointment ended up 1 pm.  We finally got in and were out by 2:30.  All that waiting for an hour and a half of service.  Oh Well, finally on the road again and heading south.  Next stop Johnson City Texas.  We have always wanted to tour the LBJ Ranch.   For those of you who are young,  LBJ stands for Lyndon Baines Johnson, our 36th President of the United States.  I was surprised how many do not know that.  Even the kids and grandkids had no idea.  I guess that shows our age.  We lived that chapter of history when President John F Kennedy was assassinated and Lyndon Baines Johnson was sworn into office on Air Force One.  We crossed into Texas finally and spent the nite at a campground.  On Tue. we drove on to Johnson City and found another campground.  On the way we had entered Hill Country.  It is the most beautiful area of Texas.

The trees and landscape were so green.  The road wound up and down and around hills.  Some place you seen what looked like small mountains in the distance.  Such a beautiful area.  After we checked in, we started our touring of LBJs life in Johnson City and the Ranch west of town.   Next Blog……LBJs Boyhood Home and LBJs Ranch on the Perdernales River. Also known as the Western White House during his Presidency

One thought on “Oklahoma State Capital Tour and Steak and Shake”