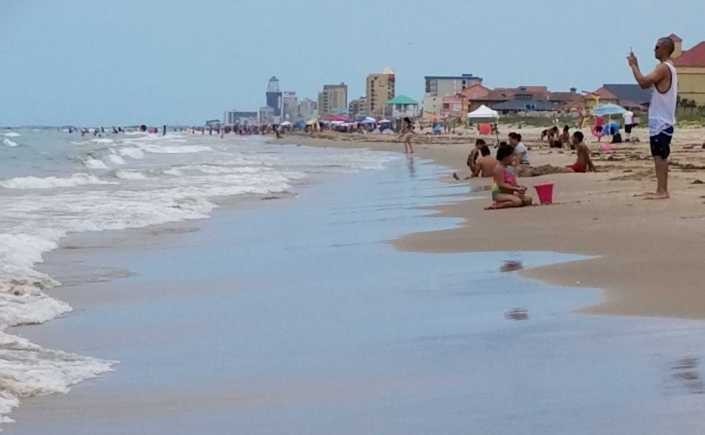 Wow, hard to believe we’ve been back for over a month already.  Back to the everyday life.  So what is that…..

Rich is working on the rental trailers.  When people move out, their is always repairs or updates to be done.  He just finished replacing a floor and drawer area in the bottom of a closet that had rotted.  Now he is working in another that had a water leak in the kitchen.  New plywood and flooring, and also the counter top was so bad, that he is now building a new counter top.  He bought a sheet of laminate from Home Depot and had to cut around it and then glue both sides and glue it down.  It is a process but a huge money savings process on a counter that is an odd size.  In this picture, he had just cut it to size.  He will then take it off, glue the bottom of the laminate, and the top of the base of the counter.  He will then put the dowel rods on top of the base on the glue surface as in the picture.   Then he will lay the glued laminate down on top the dowels. Then starting on one end of the counter, he will take out the dowels one at a time, pressing down the laminate to the counter making sure their are no air bubbles.  Then he will cut a strip and do the edge the same way.  After dry he will use a router on the edge to cut it to a smooth finished edge.

I am back at the theater, Cinemark 10.  I only work the outside box office.  During the school months the Box Office is only used on weekends.  Otherwise the tickets are sold at the Concession Stand.  I have been getting an average of 20 hrs a week give or take a few.  But the business has lessened during the week because school is beginning soon.  Starting next week during the week the tickets will again be sold at the Concession Stand.  Now I will only be getting weekend hrs.  But that ok, it is still something.  My week days will again be free.  It has been interesting in this job.  I have again met many nice customers.  I enjoy the joking that can be in 30 seconds of contact as you sell a ticket.  Some people are so spontaneous.  But then their are others.  I have been chewed out in Spanish on the Phone.   Box Office is also the switch board per say of the theater.  I answered one day and the man spoke in Spanish.  I said, “Sir I’m sorry I don’t speak Spanish”.  Now usually they change to English at this point.  Did this Guy????…..No….His voice raised and he again ranted in Spanish.  I again repeated  ”I don’t speak Spanish”  I would get a Spanish speaking person on the line.  Well, his voice raised HIGHER and LOUDER…..I can only imagine what he was saying.  So I got a manager and guess what…..He Hung Up…..lol  Oh Well…..        Another lady called one day.  Now keep in mind we have 10 theaters playing 10 or more movies.  She asked me what movies we were playing, what times, and what time did each end.  Now each movie also plays an average of 4 times a day…..Do I have time for that with customers at the window????  Nope…..Tried to be nice, but she was rather abrupt and finally hung up….Everything is online you know….About a half hour later she called again and asked about 1 specific movie.   So much easier to answer that.   Another time nobody was at the window and a customer called.  As I was answering her question, a lady and her husband came to the window and started to order their tickets.  I held up my finger saying, 1 minute please.  She stormed through the theater doors.  I was done with the call and she came out.  I apologized to her and said I was taking to a customer…..She said rather blatantly and rudely,…..”Well, I Am A Customer Too”…..He husband muttered something to her and she said, “Well never mind, Just give me my tickets“.  But most people are very nice.  I have a couple who come at least once a week.  He usually brings several pages of jokes to read.  Also a very odd old man who wears a big straw hat.  He has turned out to be the most pleasant man to talk too.  So many people come regularly because of our prices.  You see we are a discount or second run theater.  Therefore our prices are cheap.  Week ends are the most expensive….$2.79 a ticket.  Tue and Thur….$2.17 a ticket.  Monday….Groups of 3 or more $1.30….Seniors….$1.68……Wed. Discount day for all …. $1.41 for all……Most people are happy about the prices.  But you have no idea, how many people complain….”What, I thought you were the Dollar Theater” …….Go to the big citys…Check their prices…lol 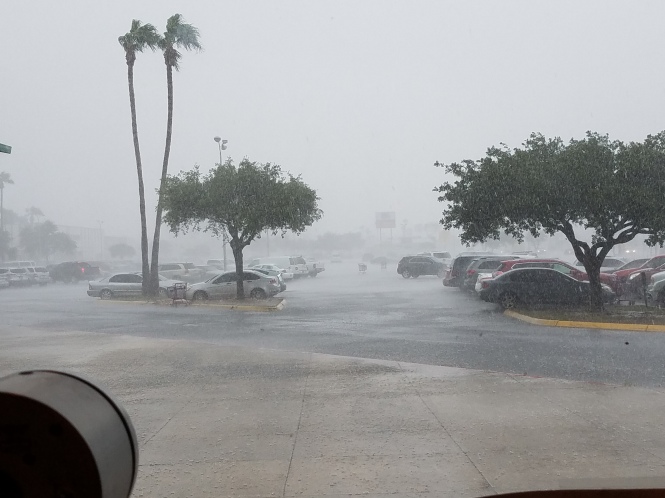 Temperature has been running around 100 degrees.  My Box Office has A/C of course.  The other day it started raining, and it came down in sheets….It was beautiful…The temperature fell.  My windows were fogging up and it became hard to see.  I realized finally, I was getting really cold….Now that’s a new concept…Cold….I went and checked my thermostat and it was set at 61 degrees….Wow…No wonder, so I set it back at 70.  All in all it has been another experience to add to my list. It’s the first time I’ve ever handled a register.  It’s touch screen.  Once you learn it, it’s really easy.  All the employees are really nice.  Of course their mostly kids.  Some will be going off to college soon and some back to high school.

While we were in Illinois, Richs’ shed was delivered.  He needed a shed to put in his tools.  So he ordered a shed from Sam’s Club.

So this was a shed that came in 3 million pieces, with pages of directions and pictures….OMG….so that mess is suppose to make a shed,……and it was so hot….So you work in the morning for awhile and then at nite.  I almost passed out one day, well I felt like it….lol….Finally a week later with several other guys helping he got it done. 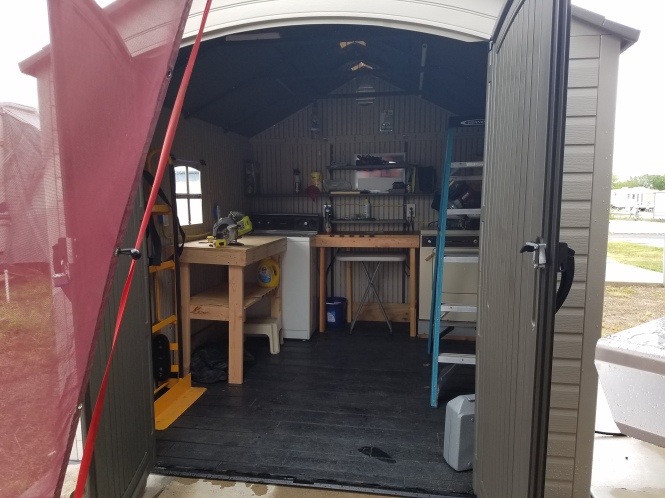 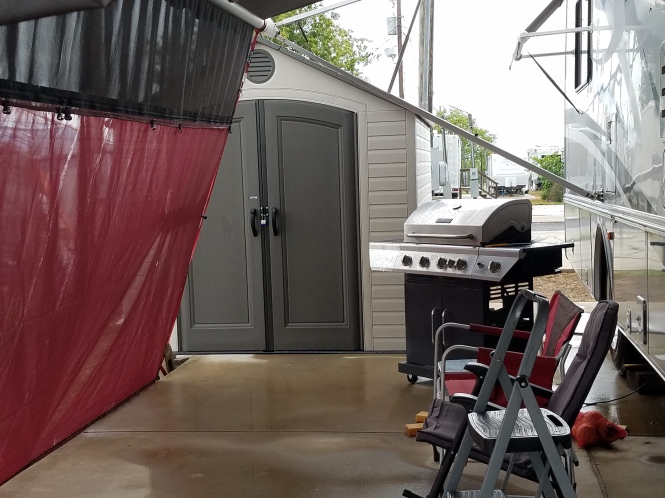 He now has a place for his tools.  We have a washer and dryer inside.  He built 2 work benches, so now he is set. 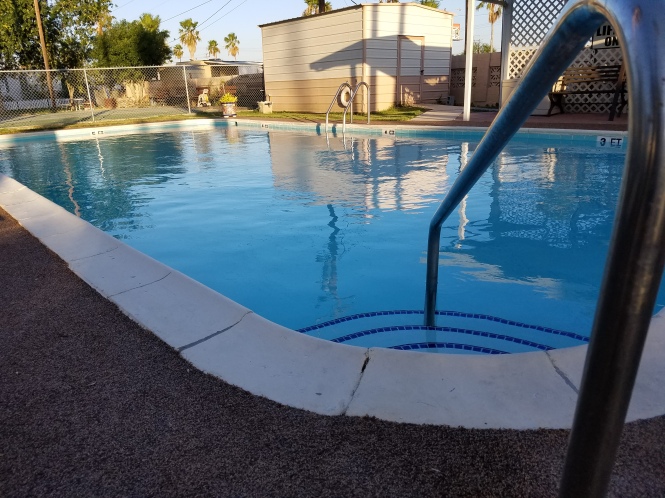 Ive finally been spending time at the Pool.  The pool is around 88 degrees.  So so nice.  This is the view as you lay on your back sunning in the pool.  The gorgeous Palm Trees..…They just blow in the wind.  It still doesn’t seem possible that this is my life now.  I can do this everyday if I choose too.  I still think of the people at Advantage where I worked.  They are doing the same ole drag day in and day out…..Their is hope out their….Just takes time……My message again is “SAVE YOUR MONEY….PUT IT IN THE 401K”….After a nice dip in the pool and floating on a noodle,  lol, now time for the Spa/Hot Tub.  Ohhhh just feel those jets pound on the sore muscles.  This is the Life.      Last week we went to South Padre Island.

We drove to Access 6, which is free parking and entrance.  Rich had our chairs and walked up the ramp and down to the beautiful sand beach.  We found our spots in front of the Life Guard.  It was a beautiful day.  Even though it was near 100 in town, it was a wonderful cool and breezy temperature at the beach. 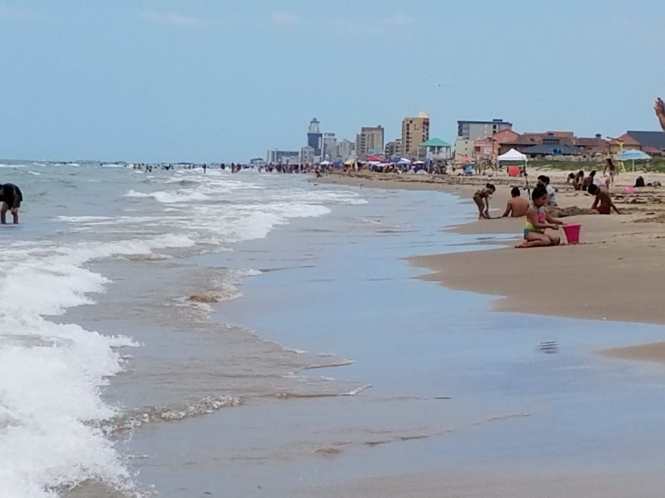 This was the gorgeous view down the beach towards all the hotels and Beach Clubs.  Many people were out but it wasn’t crowded.  The water was so nice.  Wasn’t cold at all.  You could just step right in.  I walked out till it was up past my waist.  The power of the waves felt so good as they pulled you back to shore and then back out.  When it got to be hard to stand, I decided to go back and sit and just enjoy the sun.

So many Sea Gulls were their.  They were watching all the picnickers and waiting for free handouts.  Sometimes they just congregated in groups and faced the Gulf and just stood their.  They were fun to watch.  We just sat their and listened to the pounding of the waves….coming in….going out…over and over.  The sounds of the Sea Gulls, and the kids and family’s on the beach.  Laughing and Playing.  Finally time to leave.

Behind us the Beach Patrol had stopped and was visiting with the Lady Life Guard.  Now we were hungry.

So we headed to everyone’s favorite…..Louie’s Backyard.  Well lets say one of everyone’s favorites.  Their are so many all the way up and down the beach on both sides of the island.  Louie’s is on the Bayside.  They offer fine dinning, cocktails and entertainment every nite of the week.  They offer an All-You-Can-Eat Seafood and Prime Rib Buffet in the Dinning Room, drinks and snacks on the patios by the Bay or an abbreviated Menu in the Sports Bar.  That was were we went.  They had home made Potato chips on the bar, and the Special of the nite was Barbequed Ribs.  Ohhhh Yes….That’s what we got….They were fall off the bone good, with lots of gooey sweet barbeque sauce….Yummm…..So, the end of another day….We could have stayed for entertainment on the outside patio deck on the bay but,  we were SO FULL….Time to go home.  So Ill close with a picture of a beautiful Plumeria that is growing in our Memorial Garden.

It as started from another plant in the park.  All you do is cut off the stalk in a long piece and it will root.  Some many have been started.  This Plumeria was planted last Nov. So it hasn’t even been there a year yet.  We have a wonderful gardener in the park that has started it from a cutting and tends to it regularly.  Roberta is such a talented lady.

She can make anything grow.

2 thoughts on “Back In Harlingen For a Month…”