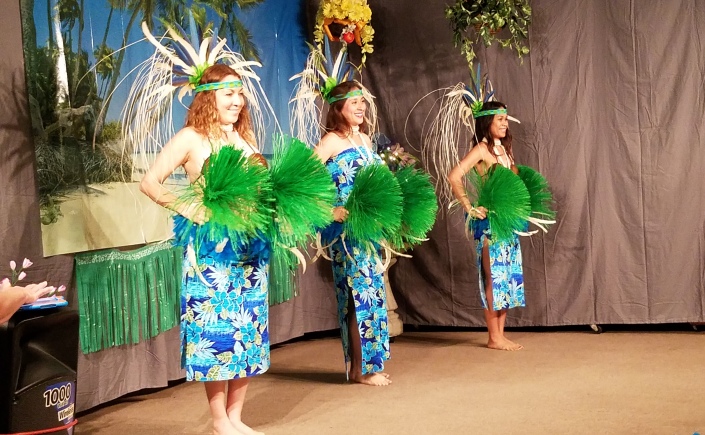 The Winter Season is now over as of April 1st.  What a fast year.  This blog will contain some of the activities we did in Feb and March.  Time for catch up.  We took a wonderful trip from South Padre Island by boat down to the Port of Brownsville.

I was surprised at the amount of people.  We had over 40 people sign up and we all carpooled to the Island.  It was a Beautiful day.  We were in for a 4 hour ride with all the free beer you could drink.  I sure don’t know why they never ran out.  A few of our guys, (not mentioning any names)….lol…drank their share and many many more.  In fact coolers went home fuller than they were before.  The weather was perfect.  When we went down into the port, we entered the Shrimp Basin where many shrimp boats were docked.

These shrimp boats were dry docked for repairs.  Down farther we entered the actual Port of Brownsville that is protected by Home Land Security.  These are the ship yards were ships are dismantled and sold for scrap.  It takes up to 2 years to scrap a ship.

This is what remains of the USS Constitution.  So sad to see these great ships that served and protected our country, being torn apart.  Also the USS Forrester is still their.  This is a very large Port containing 4 different Scrap Companys. 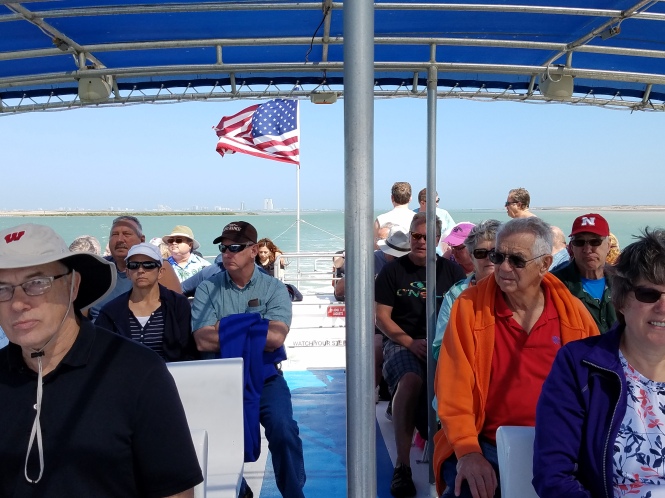 We finally turned around and headed back.  It was a gorgeous day to be out on the water.  This was the upper deck of the boat.  It held around 100 people.  Most of the people were our Eastgate folks, but they also had some others on board.

Our friend Glen also had his Birthday.  Now he is just a spoiled little boy at heart.  He kept waiting for a birthday cake every day, starting the 1st of they month.  He would post on FB….”NO CAKE TODAY”.….Kathy was going to have a small surprise party for him, but surprises never seem to work out.  Last year our good friends Cathy and Bud were here from Canada.

We had bought this pretty confetti cake.  We were at my camper just around the corner from Glen and Kathy, trying to light the candles and surprise him.  Cathy turned around and the cake flew off the board....OMG....We laughed till our sides hurt.  Finally we scrapped it up, put it back on the board and delivered it to Glen singing Happy Birthday.

Oh what a riot it was.  Everyone just cracked up laughing.  He had plenty other cakes but everyone even ate that one.  No one cared.  Well this year, Cathy and Bud couldn’t make it, so Cathy wanted me to get a cupcake, smash it upside down and give it to him…..

So here it is.  I put a sparkler in it and some ribbons.  We all had a good laugh, but sure missed Cathy and Bud.  Its something how people come for a season and you all become fast friends.  Cathy and Bud was one of those.  Somebody who was such fun and such good friends.

The Rotary Club of Harlingen has adopted us this year.  They bought the Veterans in our park breakfast last year and this year for Veterans Day.  They want to give back and show appreciation for all the Winter Texans do in the Community.  The have also started a flag program.  On the appropriate holidays of the year, flags will be placed in front of the park for the day.  Each flag is a donation of $50 for the year.  It will be assigned to a certain Veteran to Commemorate their service.  When Landon, the president of the Rotary explained the program, we had the service men start to challenge each other to purchase a flag.  By the time we were done, we had 20 flags purchase (even 1 Canadian Flag) to fly the first time on Flag Day. 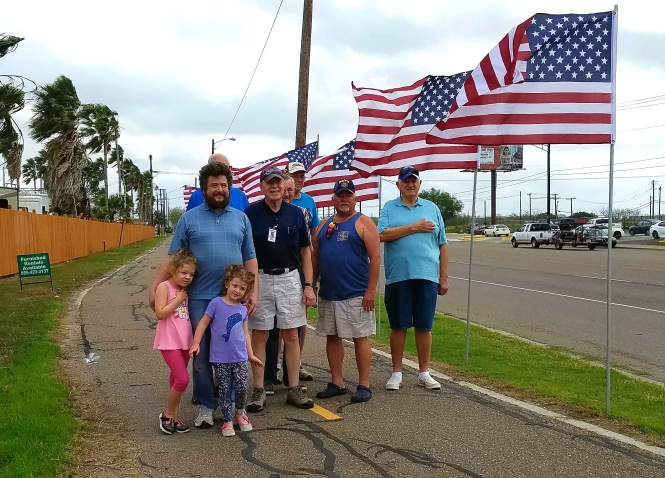 The local paper came and wrote an article for their paper and took pictures.  This is Landon and his 2 girls, who each sang a solo for our Veterans.  Also a few of our Veterans.  It was a proud day.  Seeing those flags fly and hear the breeze blow was so inspiring.

Next we had our first Luau.  One of the lady’s went to a Luau at another park and wanted to have one.  We set the date and away she went with planning.

By the time she was done.  Her and her committee put on a fabulous Luau.  We had a regular sit down dinner serving pork or chicken cooked with authentic Hawaiian recipes.  At the beginning a Pigs Head was placed on a cart and pushed around the room.  Steve was dressed in a Hula skirt, while the Emcee and him exchanged a dialog about the pigs head. 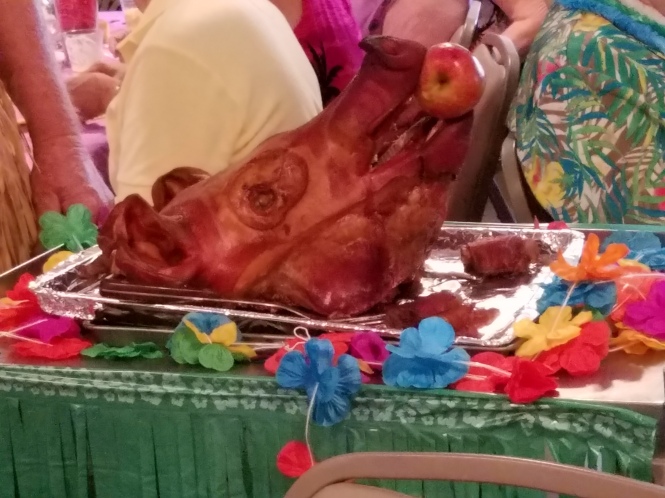 They called him …”HENRY”……He was surrounded in flowers with an apple in his mouth.  It was a riot.  People were roaring in laughter.  We also found some authentic Hula Girls over in McAllen. 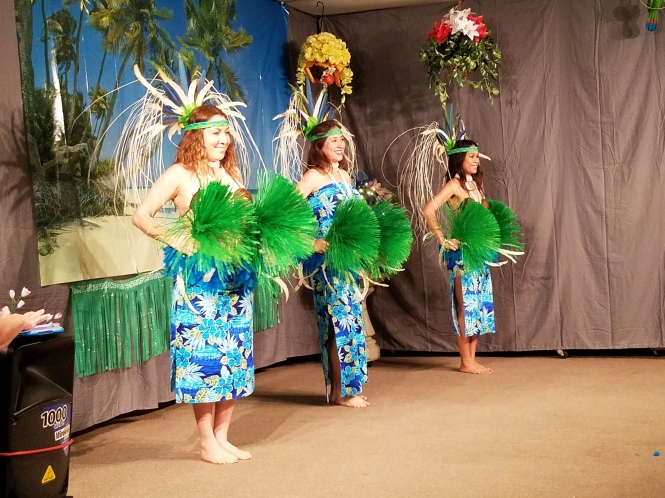 They were just awesome.   They had several changes of costume.  The performance lasted around 45 minutes.  Then they had some men come up.  …….So so Funny……

The men good naturedly, took their place on stage and was dressed in coconut shells and hula skirts.  They were a riot.  They were taught a dance and had to perform it.  It was a fabulous evening.  It was well planned, the Committee did a Wonderful Job….. 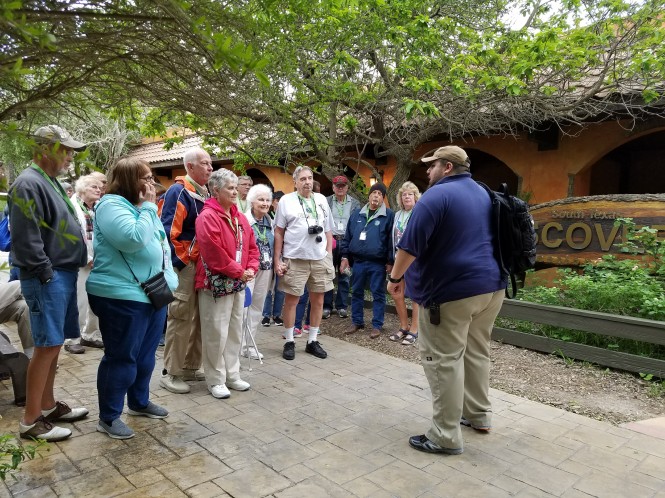 We also went to Gladys Porter Zoo in Brownsville.  It is a wonderful zoo that has their animals all in natural settings.  We got the VIP Behind the Scenes Tour.  We were taken in some of the back areas to see how the animals are feed and taken care of.  We walked the first half of the zoo and passed by many animals.  We seen so many different monkeys, birds, rhinoceros, etc.

We were taken into the Galapagos Turtle area.  They love celery like we like candy.  Everyone got to feed them. 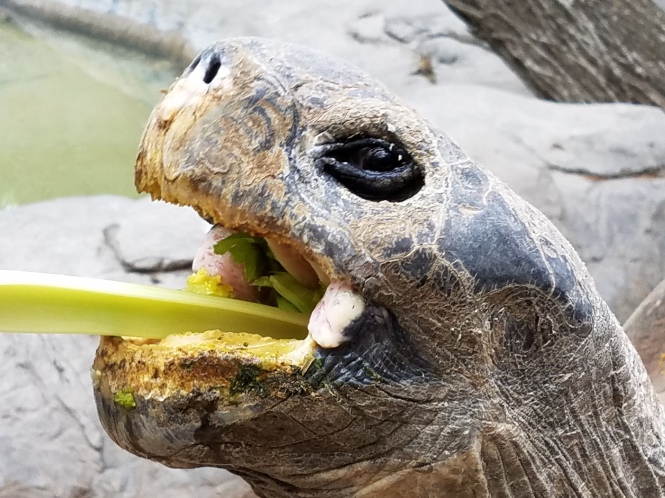 This guy is around 50 years old.  He is huge and weighs a lot.  We were told to watch our toes, cause if they stepped on our toes it would hurt….lol….We then went inside a building to where the Kangaroos were. 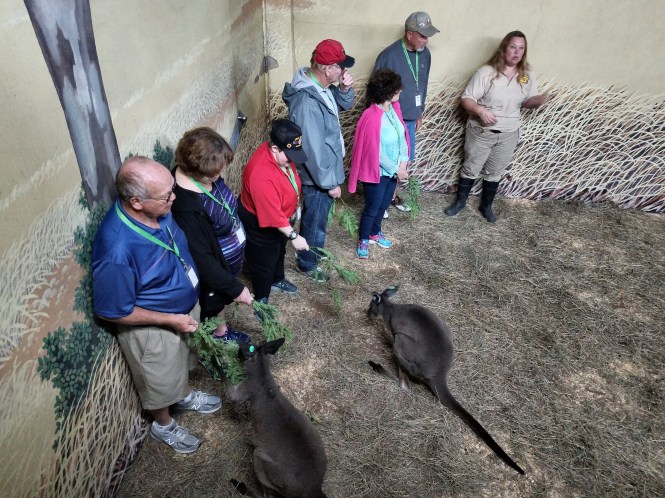 We were take down in small groups to where there inside house was.  They like to eat certain tree branches and bushes.  She told us how far they can jump.  If they had a larger area, they could run and jump up easily to where I was taking this picture.  She also said to move slowly, no sudden moves, as they can really punch and kick.  You could be injured. 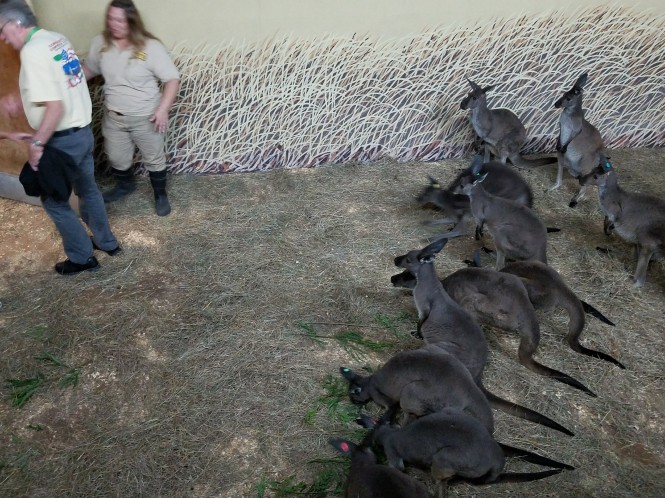 As we left they all lined up.  Now it almost looked scary as if they were plotting a massacre.  Finally after more walking we boarded the train.

We were able to ride to the Giraffes.  This was a cool little train that went through the park passing so many animals.  Tigers, Lions, Camels, Gazelles, Zebras, Elephants, etc. 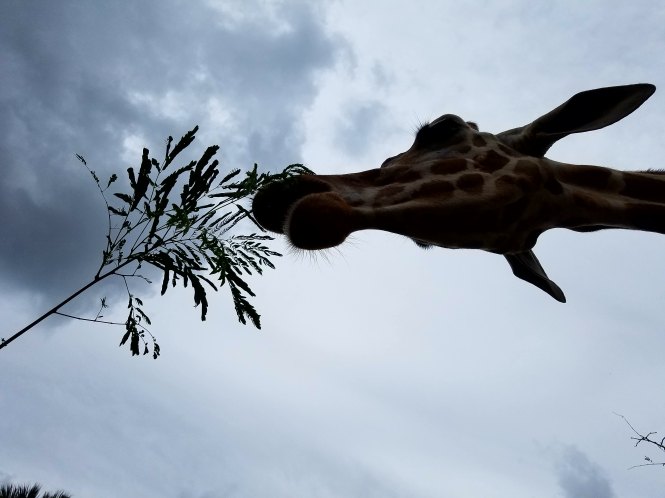 Finally we made it to the giraffes.  They also ate the leaves on branches.  They would bend their head down to us to take the branch.  They finished the tour by giving us a nice lunch.  They brought in a Parrot and a little turtle to touch and hold after we ate.  It was really a great tour.  So this is just a few more things we did with more to come.  Ill finish with a cute picture…….Remember our “Beautiful Pot Hole Tree”?   On Valentines Day a Beautiful Heart showed up in the Pot Hole….. 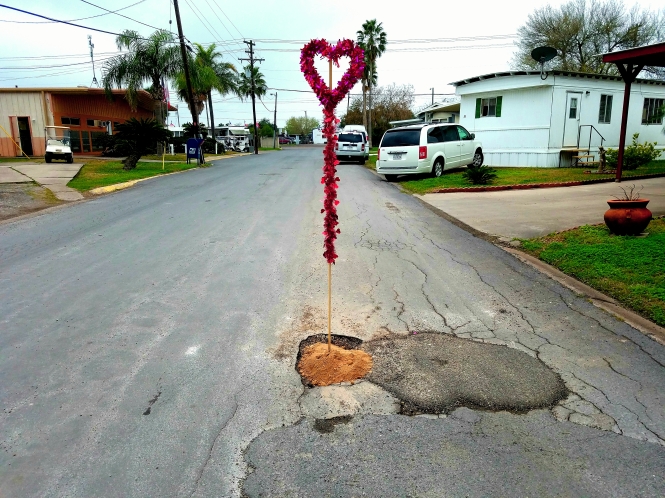 Such a Beautiful Remembrance……lol..   It too, did not last…..Someone took it away…..

One thought on “Catching Up on This Seasons Events”