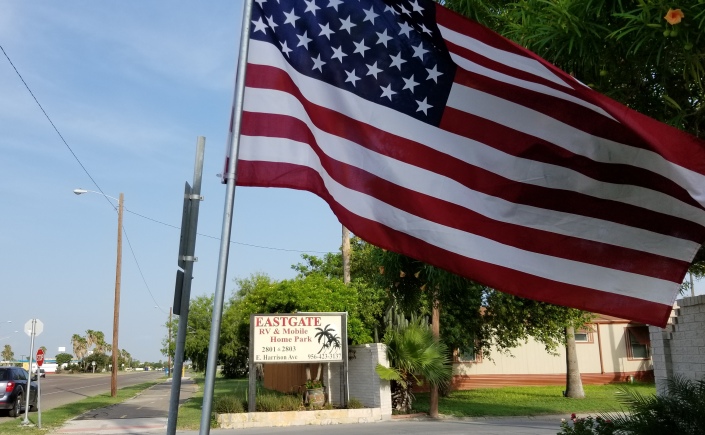 Have I been Busy????  or Lazy???  Both.….I still haven’t finished writing about our cruise in April.  But right now I’m writing about the bad rains and floods we had here in the Rio Grande Valley several weeks ago.  Down here we seem to get the bad tropical storms or depressions that come in from the gulf.  Around the week of July 19th,  a sub tropical depression came in over the valley.  Rain was predicated,  but I don’t think they expected that much.  That Wed morning I woke up about 4 am to hear a loud noise.  At first I thought the A/C was making a terrible noise.  Oh Crap, another expense.….But after listening I realized it was raining very very hard.  I had to work at the theater that morning at 8:30 am.  I got ready and it was still just pouring outside.  I called the theater and the workers were coming in.  “The theater never closes ya know”, they said.  It was the morning of the Kids Summer Movie Club.  Every Wed at 10am.  So as much as I wanted to stay home, I got out my umbrella and out to the car I went.  We had running water on our street in front but it was not accumulating.  I backed out and just up the street a short ways was the first corner of the park. 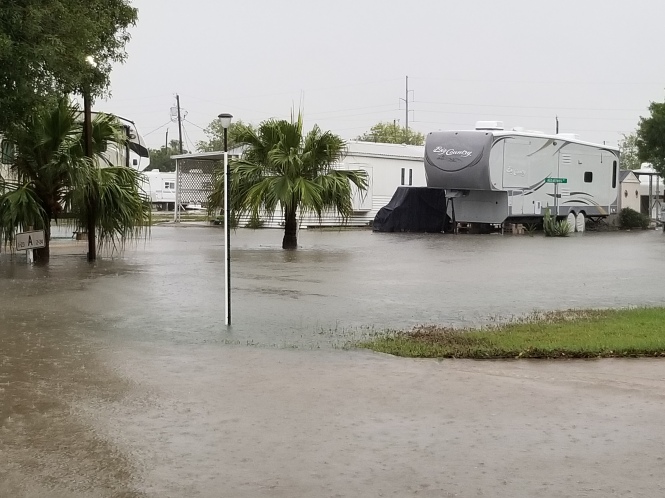 It is just a little lower that the RV section.  This is were the water began to flood.  Wow. 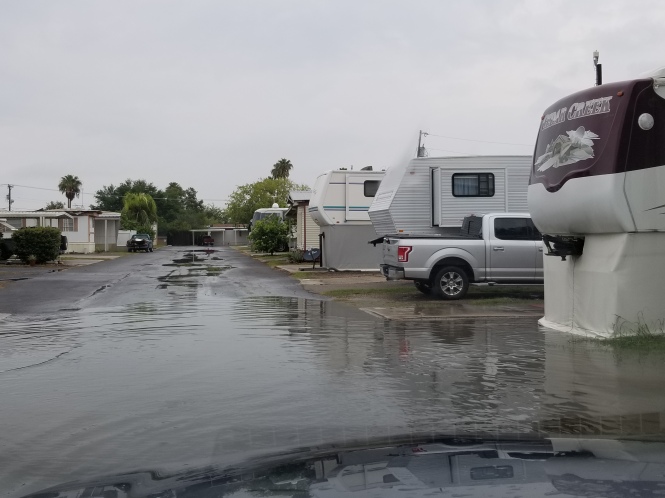 As I looked back, this is our street.  You can see the pickup on the left and the MH on the right.  All the water ran down hill.   As I left the park, I stopped at each street to take a picture of the side street. 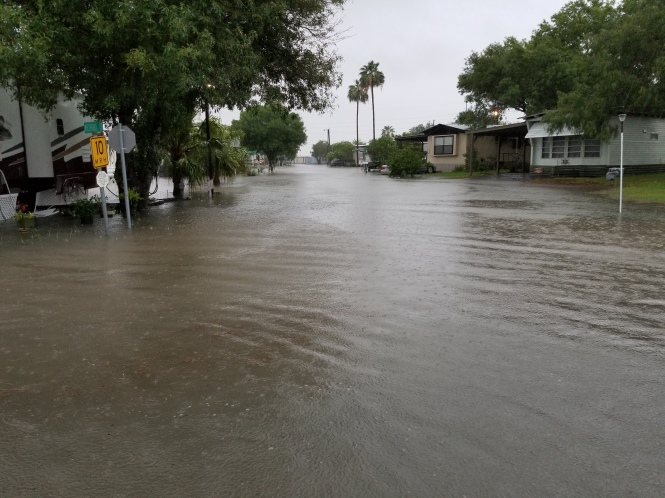 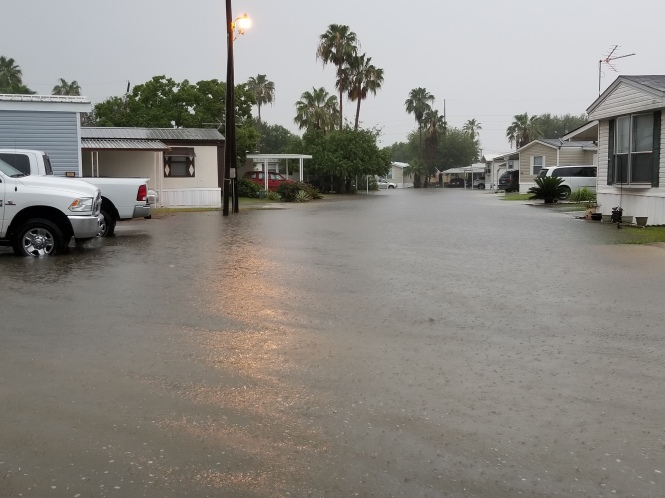 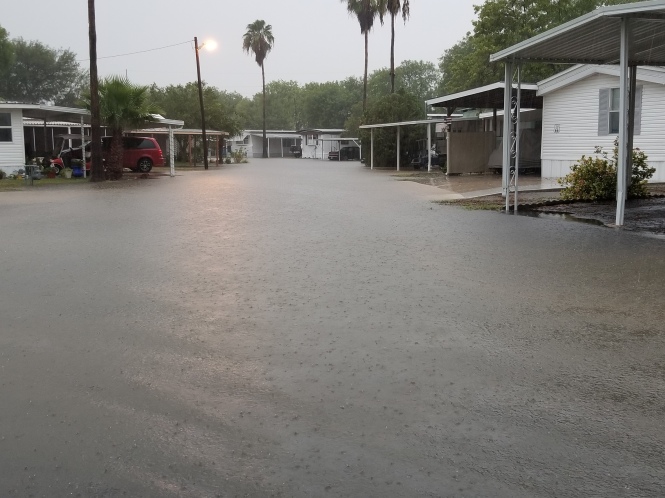 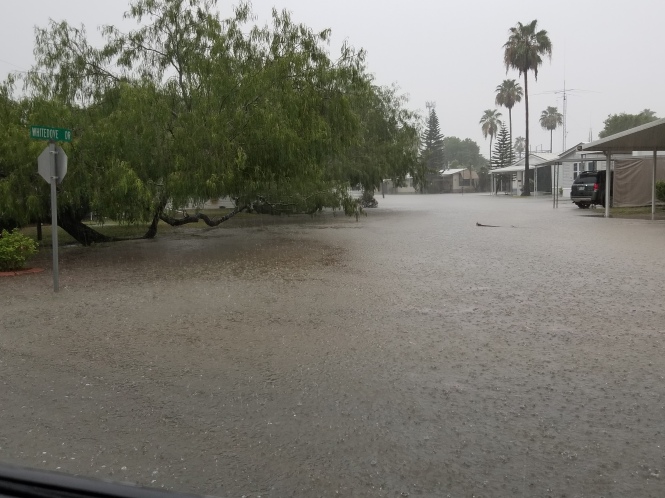 I was amazed to see all this water.  As you can see, it was still raining.  All the side streets in the mobile section were flooded.  Fortunately, it never got high enough to go into trailers.  Most trailers are not only built up higher on their pad and the trailer itself is several feet higher off the ground anyway.  So mainly it was the inconvenience for residents to not be able to get out.  I drove on to the theater.  We had 3 of our 10 theaters saved for the Movie Club.  The kids made up snack packs.  Usually Day Care Centers come with buses of kids.  Finally we had 2 groups come…..Group of 8 and a family of 3…..No Day Care Centers.   So the Movie still goes on…..lol…..Finally around noon, most of us were sent home.  A number of the streets were reported closed but I had no trouble driving the mile or so to get home.  By that time the water was already receding in the park.  It was only in the streets and most of them were drivable by then.  So Eastgate was very lucky.  But the rest of the Valley was not.  It rained off and on for the next several days, while the storm seemed to circle over head.  Finally when all done, Harlingen received 16.75 inches of rain which was the most in the Valley.  That was a whole years supply in a few days.

Harlingen did pretty good but Weslaco and on to Mission received a lot of property damage.  Weslaco downtown and shopping areas as well as residential areas were very damaged.  Many home throughout the valley had several feet of water in them.  Storm centers opened, the boats and rescue vehicles were out.  Our county which is Cameron County and Hidalgo County were declared Disaster Areas.  Red Cross was set up and Fema is now in place.  The reports said we receive just as much or more rain than the Hurricane Dolly brought in 2008.  In our History books of Eastgate, we have a few pictures of Hurricane Dolly.  One of the pictures has a person in a row boat.  Now I believe that would have been possible that morning on our streets.  Now our Next Battle……..

MOSQUITOS‘……Those dreaded little pesky bugs that bite and thrive in water.  Down here we do have reports of the Zika and West Nile virus.  So that is a worry of people also.  The city’s started spraying right away.  They not only do they spray for the active bugs but also are dropping pods into standing water locations to combat the pre-emerging mosquitos.  Their was standing water for days and some areas a week or two.  Our neighbor across the fence had standing water a week later.  That promotes hatching mosquitos.  You could hardly go outside for several days.  But I think finally that is under control.  Now another problem.   Pot Holes….Our park also was very lucky.  I seems like our roads are intact.  But through out the valley the roads are now falling apart.  The city trucks are out putting up orange cones and filling potholes.   So now Rich and I have a list of weather we have witnessed in Harlingen……1.  Our first Hurricane, August 25, 2017, Hurricane Harvey.   2.  First snow in the Valley since Dec 2004.  We had a dusting of snow on Dec 6 2017, which they called the Blizzard of 2017.  Police and News Reports cautioned everyone to slow down and drive safely.   Kids were ecstatic.  Now how crazy is that.  3.  Now a major flood which brought a flood comparable to Hurricane Dolly.

We went back home last month also for 3 weeks.  We had Grandkid graduations, and some other things to do, but I will be finishing the Cruise on the next blog.  Here at the park its been hot and quiet.  Because of all the rain, the grass is now green, and growing.  Here’s some pictures of the beautiful flowers on cactus plants. 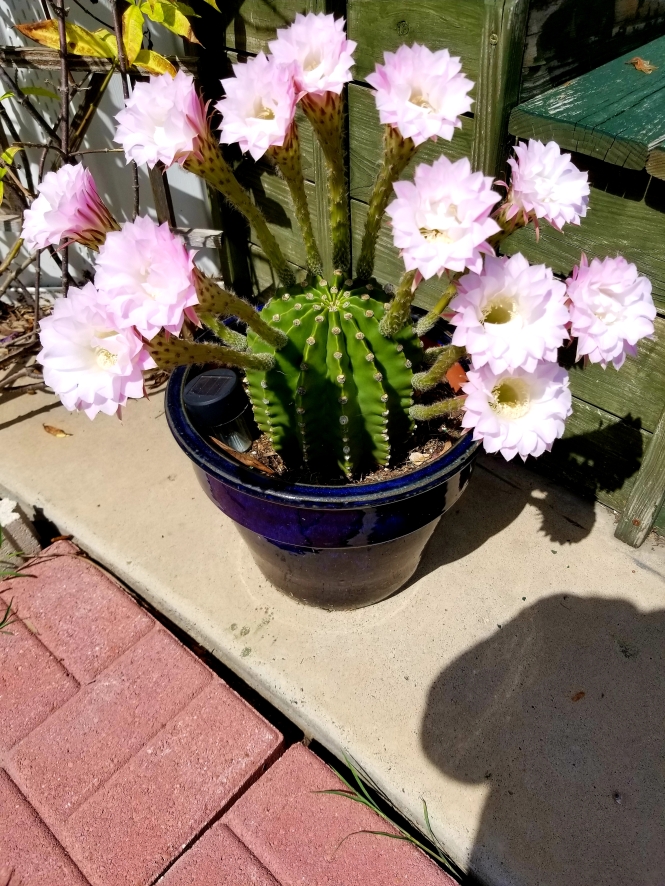 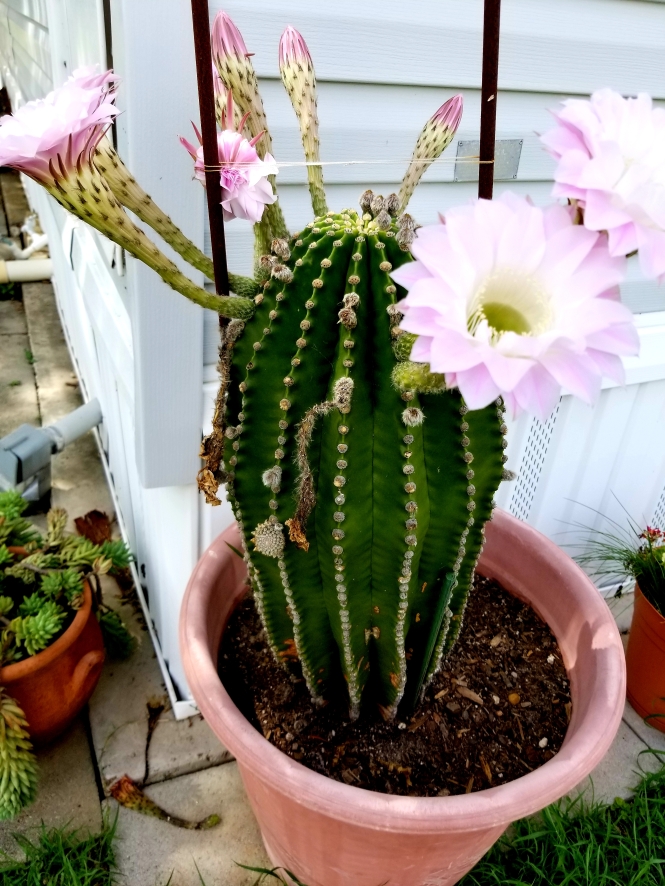 You would never think such a beautiful flower can bloom on a cactus.   These are at some of the homes surrounding our pool.  The close ups are just so pretty. 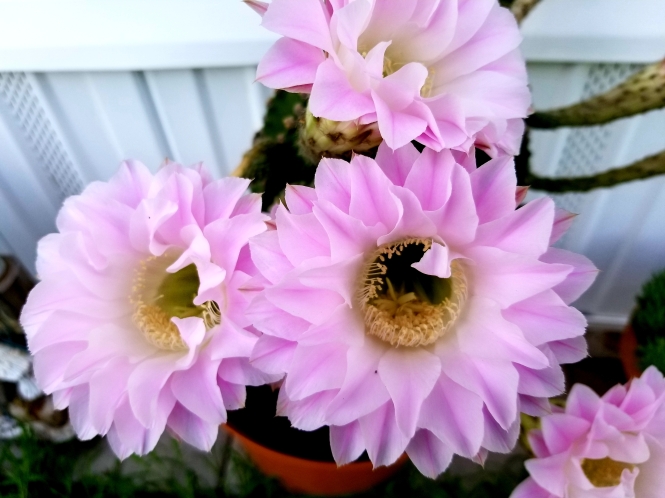 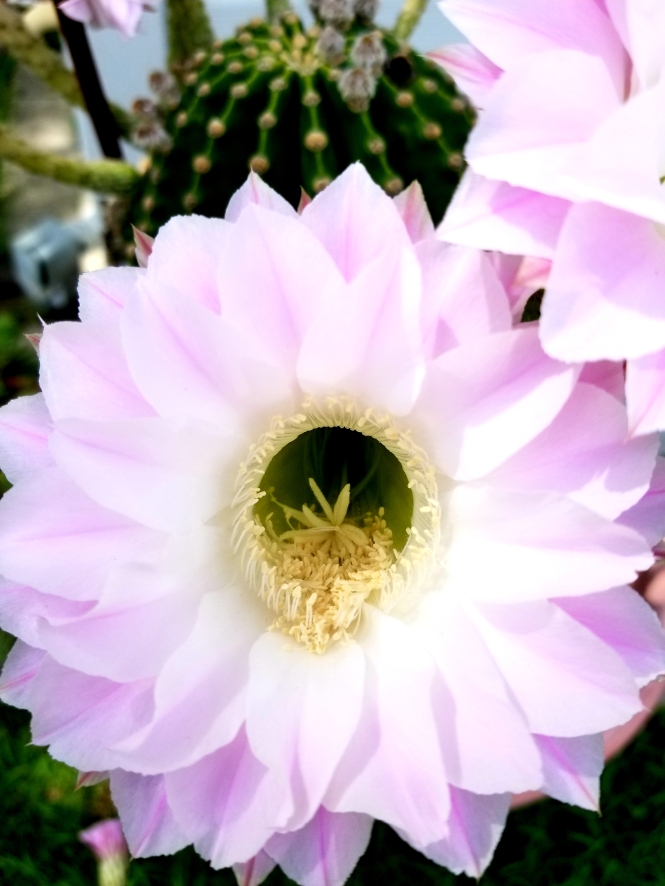 So delicate, and the colors so pale and gorgeous.  We’ve also had several holidays now where our flags have been displayed. 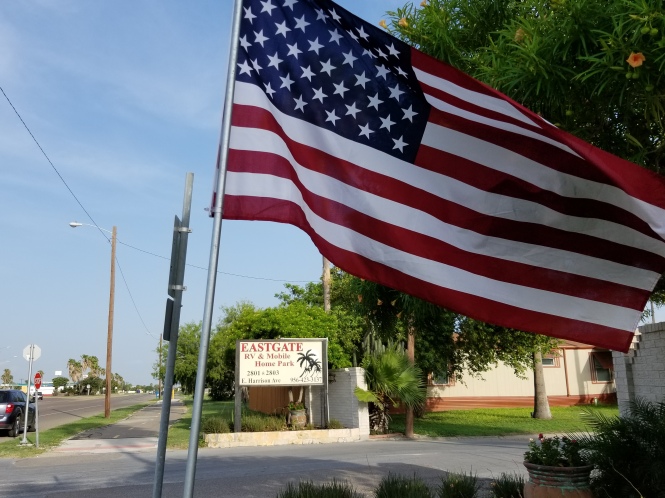 Last season the North Harlingen Rotary Club promoted a new program of sponsoring a flag for $50, in memory of a veteran.  Your subscription would be for a year.  It would be installed and taken down on the certain holidays like Flag Day, Memorial Day, 4th of July etc.  The Rotary would take care of installing it in the morning and taking them down before sunset.  It was so overwhelmingly received, that 21 flags now fly in front of our park, lining our street on Holidays. 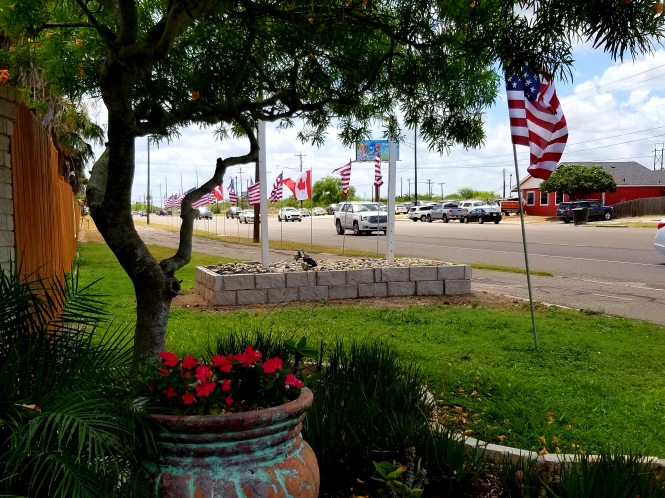 Everyone is so proud of our Flag, the Veterans who have passed as well as our Veterans who are with us.  Thank You All for everything you have done so we can be …….”FREE”…..Many families have suffered and gave up so much for our Country.  We must never forget this.  Here at Eastgate we are a community of Americans and also Canadians.  We have many Canadian Winter Texans that bought mobiles for their winter home as well as many who may come in their RVs.  We are all family.  The beauty of this flag program is we also had 2 Canadians that subscribed to the flag program in honor of their family member.  Our 19 American Flags, fly in UNITY with 2 of their Canadian Flags…. 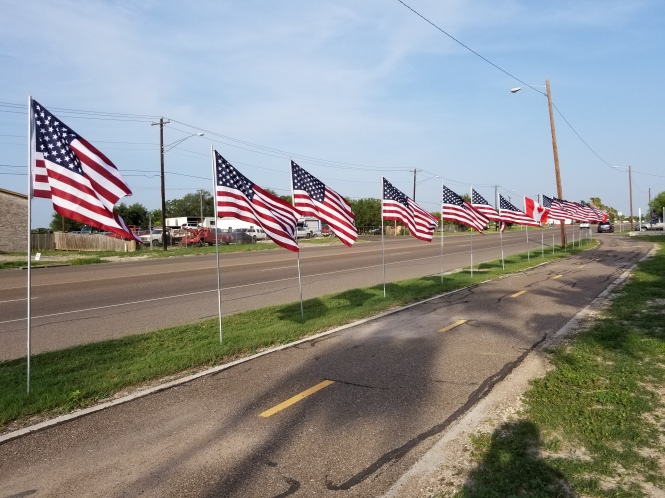