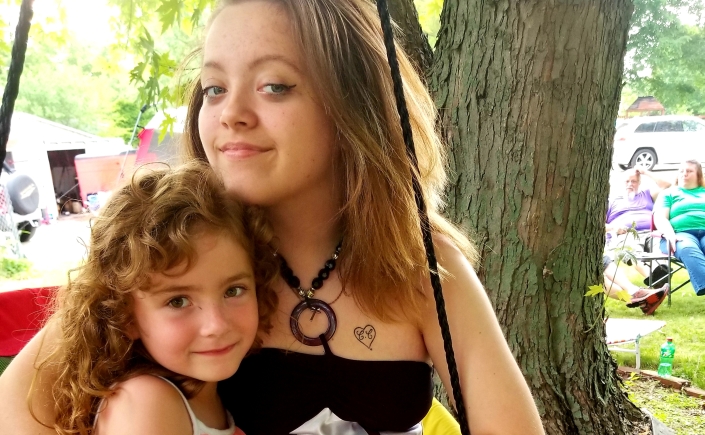 Last May we headed back home to Illinois for the 2 Granddaughter’s Graduation’s. Cassidy was graduating 8th grade and little Carly, Kindergarten. We decided to just drive the car and leave the Motor Home in Texas. It would be cheaper. Now what about the cat. He has never been in the car. When we were in Adventureland in Iowa, we took him home in the truck. We almost gave him a heart attack, and that was only 4 hours. Now were talking 24 hours if you drive it straight through. We couldn’t ask anyone to take care of him for several weeks, so we decided Kitty was going on a road trip. Rich said he’s never to old to learn. I bought him a soft sided zip up carrier. I laid it open for several days and he crawled in and laid in it. So maybe it will work??? But he is an old man, set in his ways. He doesn’t like change. So finally the day came.

We put the back seats down so he had the whole back. Put his kitty litter, food and water in the back on a blanket. His carrier was in the middle so he could see between the seats. He hated when I carried him to the car, he meowed for the first half hour. Finally we went through the Border Check point at Falfurrias. We kept him in until then because you just never know what may happen their. The Border Patrol agents have dogs that sniff every car. Not that we have a reason to worry…..lol…but you never know. Then we unzipped him. He actually did wonderful. He adapted so well to the car. He roamed at first, checking everything out. But he was so good. We pretty much drove straight through stopping only to sleep a few hours. About 2 hours from home in Lincoln Illinois is a Bonanza Restaurant. 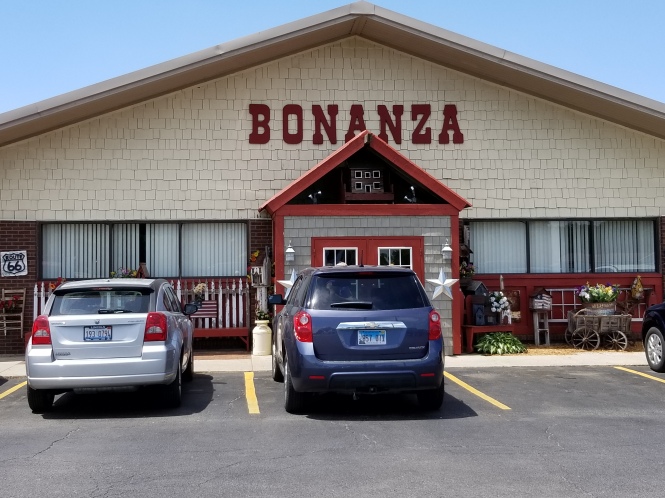 Its an old time favorite of ours. We try to stop if the timing is right. This one is a franchise but they have kept the menu the same. They have a wonderful salad bar. 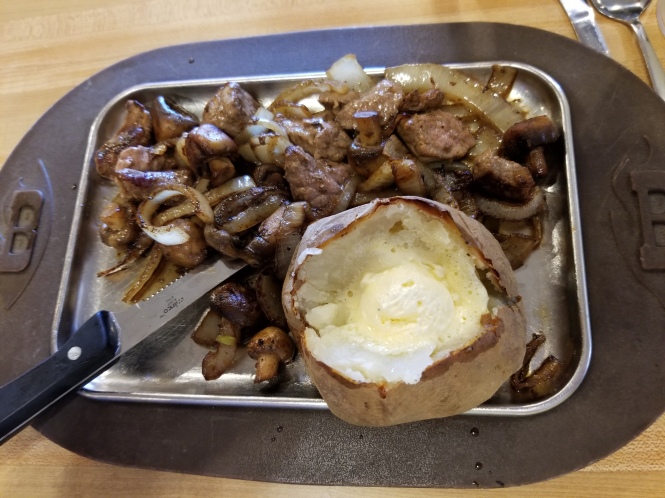 I always get my favorite…..Sirloin Tips with grilled mushrooms and onions.….Yum Yum…Theirs nothing like it. 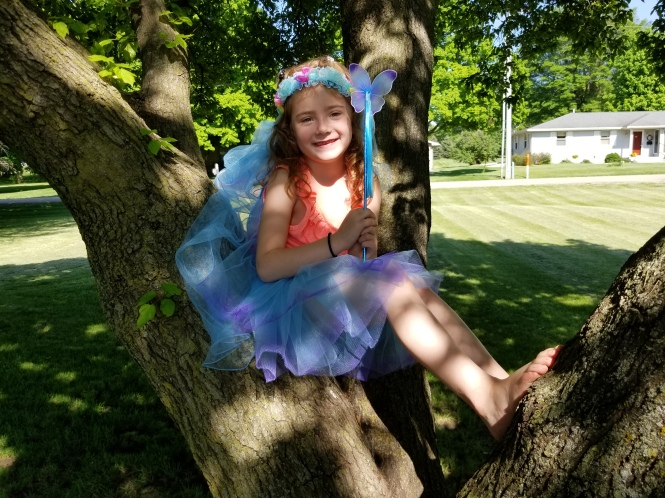 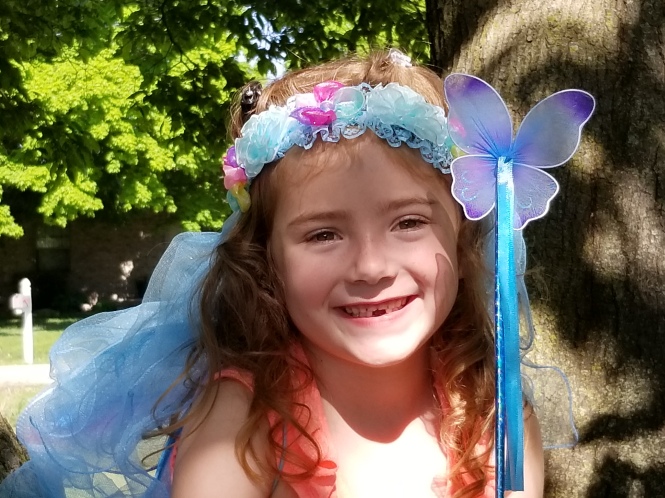 Finally we arrived and little Carly was so excited to see us. She had her fairy outfit on. She went and posed in the family tree. That nite Austin had a Softball game. 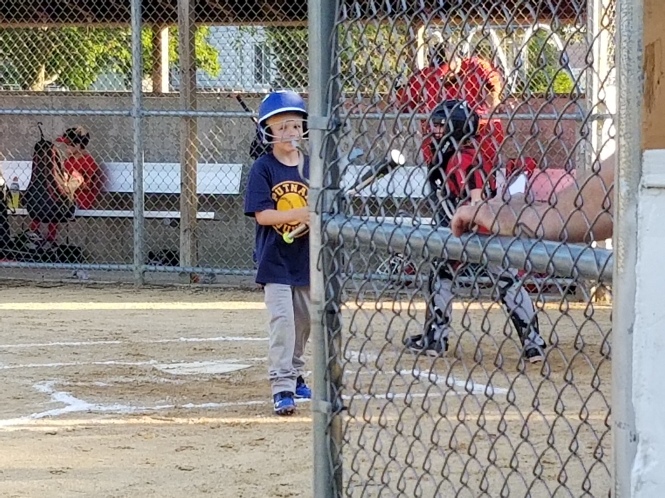 We went to Granville to watch him play. Of course we also had to visit Scott and Brandy’s bar One Paw’z Pub. 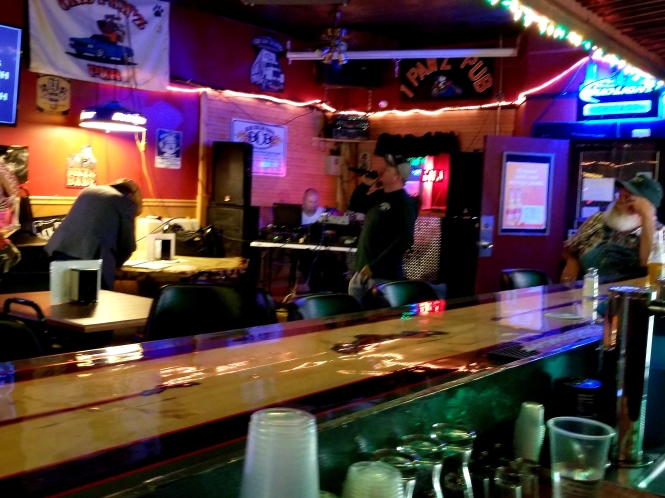 Finally Graduation came for Carly. Her year in Kindergarten is over. On to 1st Grade. 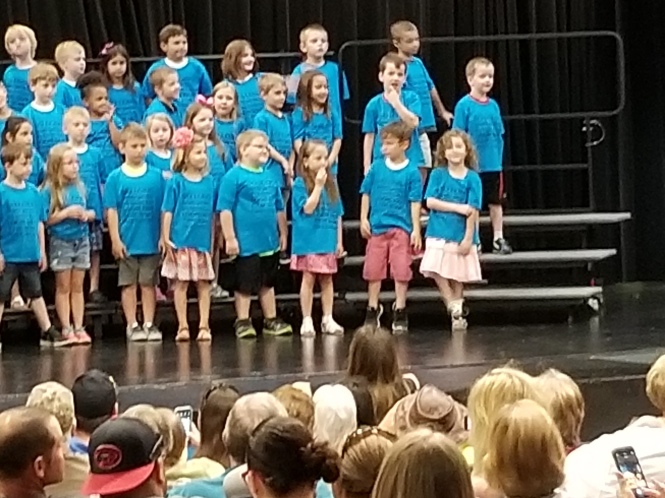 Carly, 1st row on far right. Jacob, Carly’s cousin in right next to her.

They were using the Auditorium at Putnam Co. High for the kids. Granville has 3 classes of Kindergarten for all of Putnam Co. They were so cute. They sang songs with cute motions. Finally they gave out the diplomas by class. 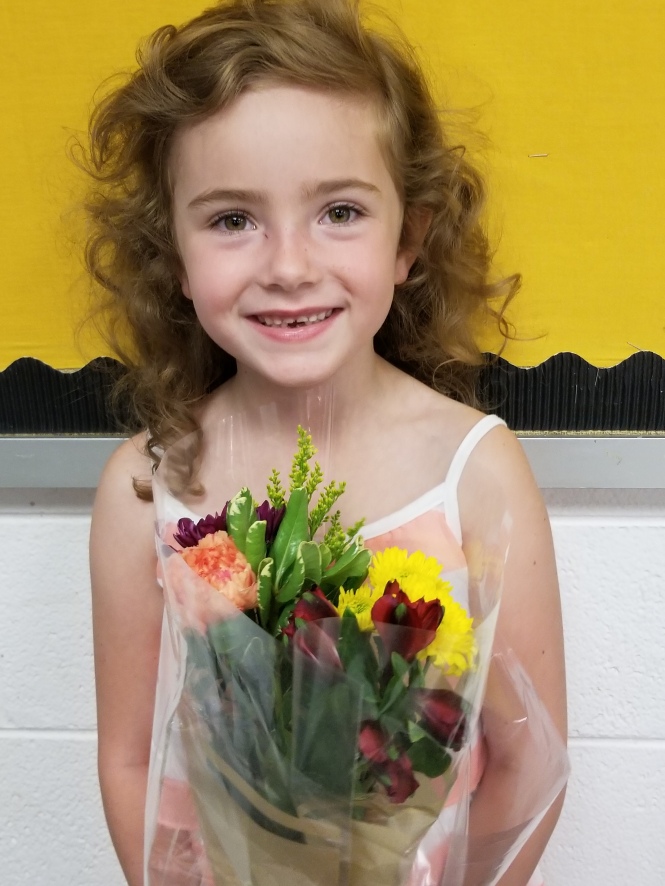 After, I gave her a bouquet of flowers. She is now ready for First Grade. Carly is our youngest grandchild. She is sure growing fast. We had a picnic for both girls. Cassidy graduated 8th and will be a Freshman in High School.

Tammy invited friends and family and had a cake for each. Now Carly was unhappy cause she thought Cassidy’s cake was prettier. She was crying and then she tried to stop but it was so hard for her…..lol…..Finally it was all better.

They are so cute together…...That is when their not fighting….lol… We have also gotten 2 new grand dogs. Tammy and the Kids got Jazper.

He is a Silver Lab. Tammy said she can’t even go to the bathroom by herself. Jazper has to come with. lol. Tina, Ed and the kids got Dee Dee last fall. 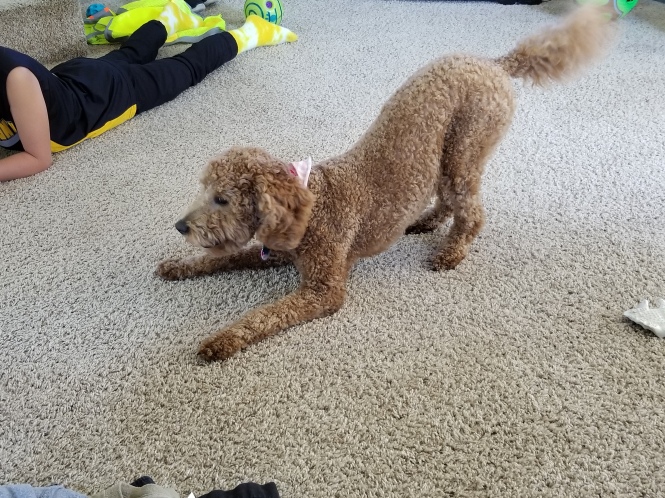 She is a small Golden Doodle. She is more laid back that Dexter was. I had a hard time calling her by her name and not Dexter. She looks just like Dex. She loves playing with her kids Miley and Austin. We also have 2 other restaurants that I usually like to eat at when were home…

I decided to take the kids to Hobby Lobby and buy some fun stuff to do on one of our last days their. Tina said Miley wanted her toes done, so I took her first to the Nail place at the Mall.

She picked out her polish which was a silver flake. Miley is 9 years old now going on 10. Time to start doing girly stuff with her…..We also went to Bath and Body and picked out some soaps and body splash. We had a good time smelling everything. Then we met Tina with Austin and Carly at Hobby Lobby. We ended up picking up stuff to make Slime and some other things.

On Monday I went over to spend the day while Tina and Ed worked. We brought all our stuff outside to make the Slime. I’m sure glad we did it outside as it turned out messy with all the glitter. We needed Elmers Glue, Baking Soda, and Contact Lens solution. We also bought glitter. It was fun but the glitter blew everywhere. Before we were done they kept making different batches until the large bottle of Elmers was all gone. And it was the largest bottle they make. Later when Tina came home, we visited for quite awhile. It was very quiet in Mileys room.

I walked in and her and Carly were putting makeup all over their faces. Such silly girls. Now I’ve mentioned all the grandkids but Cameron. He is the one that is hard to get a picture of. This is a picture of him and his friend Torri in his boat. One of the toys he bought last year. 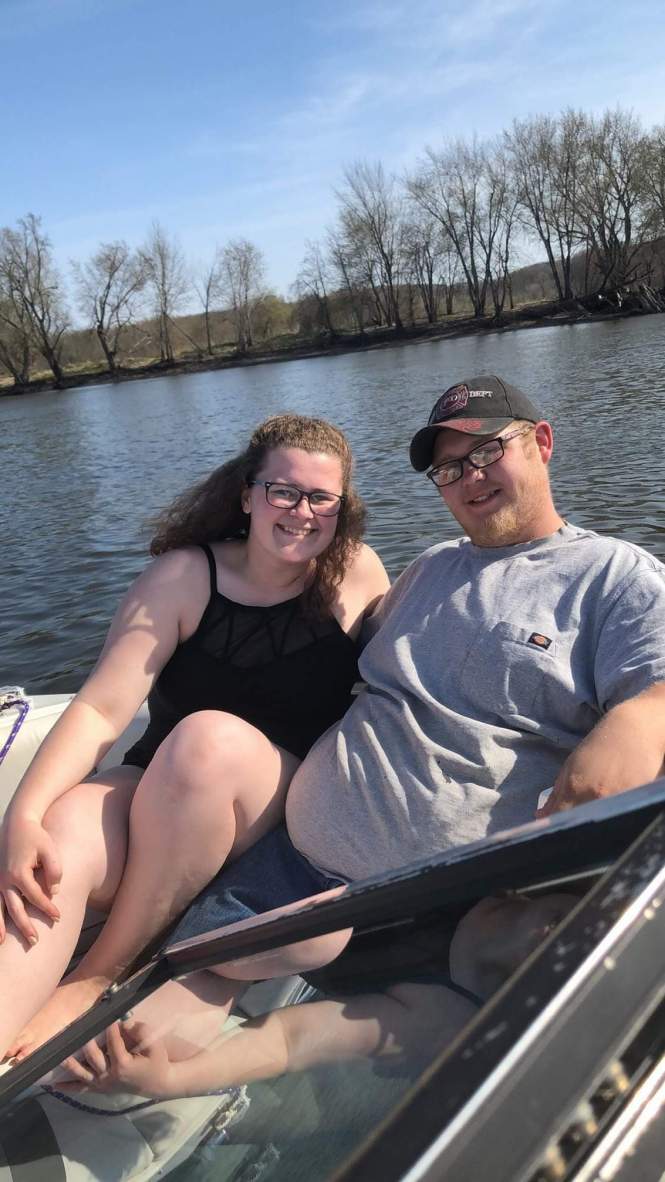 Its a Ford!!!!!.…But Grandpa forgave him. It is pretty. But it wasn’t pretty enough. 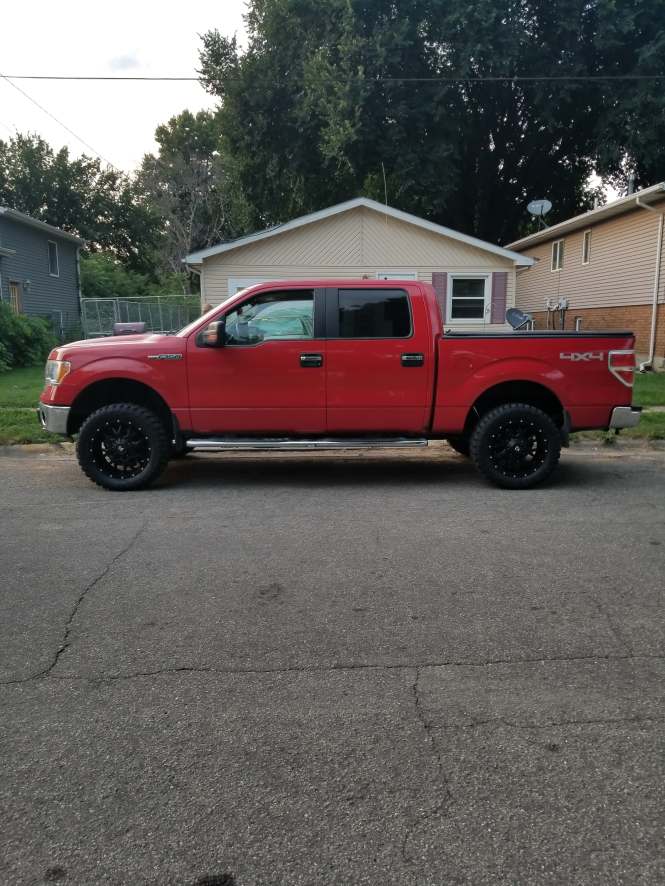 He had to go buy new tires and rims. They are nice…but….I guess live and learn…..He’s Happy, and its his money. Finally it was time to head back to Harlingen. We packed up the car, prepared Kitty’s back end. But now we always bring more back so now the car is really filling up.

Kitty had to explore all the mountains of stuff in the back of the car. He fell asleep on the mountain…..lol…

As we traveled he was so good. He liked to sleep on the floor with his head buried under the drivers seat between Rich’s legs. When we stopped to gas up or eat, he would just stay wear he was. He never attempted to get out. We drove almost straight through all the way home. We slept for a couple of hours in the car and made it in around 24 hours. Long Long ways………………While we were in Illinois we also worked at the Summer Camp Festival for 6 days as Security Guards. We did this also last year. My next blog will be about Summer Camp..