I just returned from a trip back to Illinois. The purpose of the trip was to attend my “50th” Class Reunion from Toluca High School. “50” ??? Really “50” How ever did that happen. I really doesn’t seem that long since we walked out the door for the last time after graduation. When you are a teenager, life is eternal. The thought of aging and growing old, is just never going to happen. That’s not even reality. Your whole future is ahead of you and your anxious to spread your wings and begin. But it does……….All of a sudden your caught up in life, what ever it me be, and you blink your eye…….Here we are “50” years later. Some stayed single, some became Parents, then Grandparents, even Great Grandparents. We have weathered 50 years of living in the adult world. Many of us are now retired. “Our Golden Years Are Here”. We have moved from one coast to another and from the north down to Texas. But we managed to get 18 of us to return to Toluca for this reunion.

And here we are today, 50 years later.

Last year Morine, our Class President emailed the plans for the reunion. Most of the reunions in Toluca take place over Labor Day Holiday. This is the Big Celebration for the town. They host a 3 day carnival, parade, entertainment, food tents, bingo, and many other activities for the town. It is a Holiday the town plans for all year. Of course as a kid, this was the time of the year you waited for. This was the Coolest, Biggest Event of the Year. I lived a block from town. I remember being so excited to see the carnival come in to town. We usually started school around Wednesday before Labor Day. We had 3 days of school. But why did those teachers have to give us homework for the weekend??? I seemed like they did that every year. So Cruel. So as we drove into town. It was actually exciting to see all the activities and the carnival in place. The Reunion was at Mona’s Italian Restaurant.

Mona’s and Capponi’s have been a Legacy in town since the 1930’s. They are family owned restaurants that are famous for miles around, for their fried chicken, spaghetti and ravioli, and their homemade VO salad dressing. As we were growing up, this was always the place to go for nice dinner. It was a place that everyone gathered for any event or party. This same sign has hung since I can remember. It signifies Toluca. I actually lived right behind Mona’s on the next street. Ohhh the aroma’s that would come from the kitchen. It was Wonderful. In the back ground, you can see Capponi’s. It was owned by the Capponi family, but was purchased and now both are owned by the Bernardi Family. Their Grandpa had the nickname “Mona” back in the 30s.

We were taken back to the private dinning room. On entry, this was the cool sign they made.

It was so nice to see everyone. We all wore name tags, which were our high school photos, but no names. A couple of people I had to look at their name tag, as I didn’t recognize them. 18 of us showed up. It was a very nice crowd. We did lot of visiting and getting updated on our families and lives. 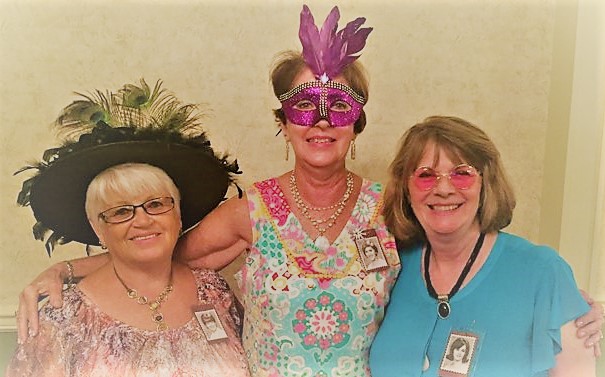 They had placed lots of cool props for a Photo Shoot. Boas, hats, masks, etc were on the tables. 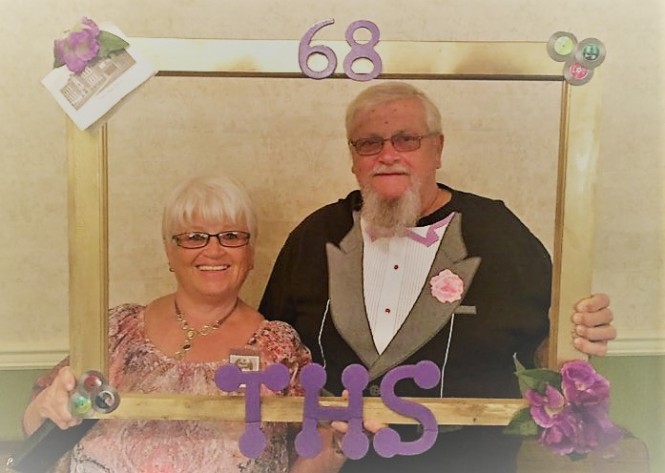 The committee also made a photo frame for us all to take our picture. We had a choice of chicken, steak or cod. After dinner they cut the cake. 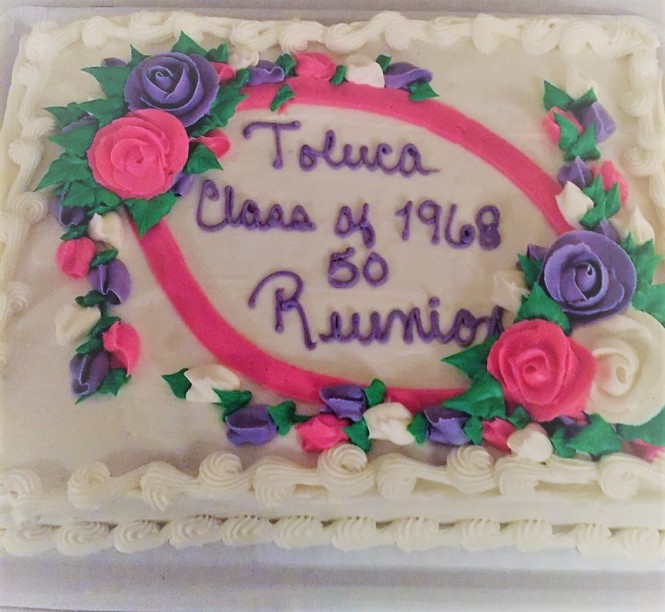 Morene gave us the report on the people who didn’t attend. Some had plans, some just didn’t come. Their is only 1 classmate we don’t know what happened to. We’ve had 3 pass away. 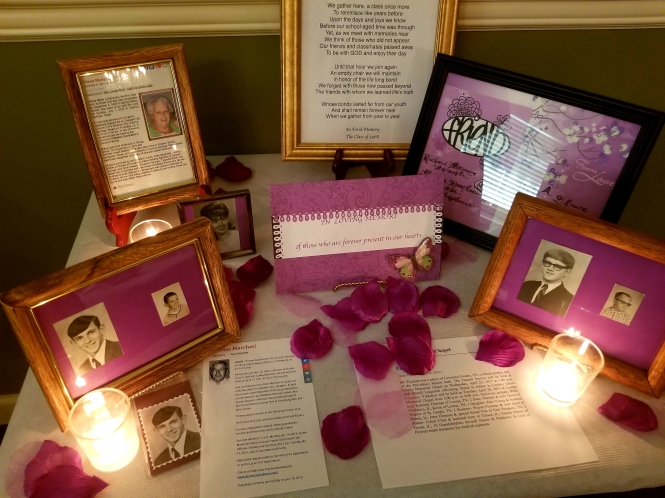 This table was set up with their pictures and obituaries, and a candle for remembrance. 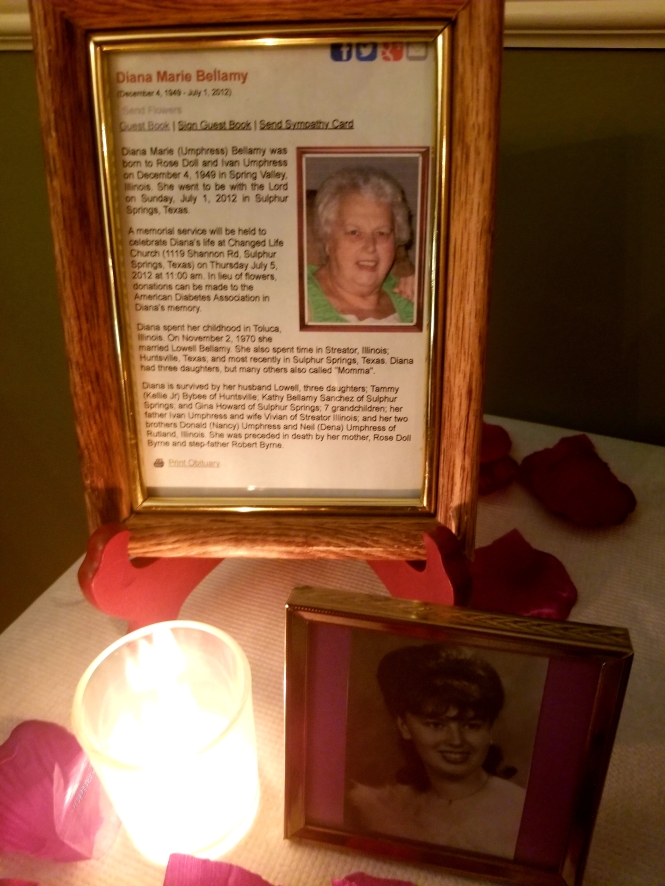 Diana was a good friend all through high school. She had went to St. Ann’s grade school, so I didn’t really meet her until we were Freshman. She moved to Texas several years after graduating. I never seen her again. She passed away from Cancer.

Rick Fleeman moved to Tennessee and passed of Muscular Dystrophy.

Tom Marchesi only moved to Lacon. Its not far. He passed away from an ice fishing accident.

Finally after eating, and much visiting and picture taking, we all went our ways, but we set the date to do it again in 5 years. Lets hope were still all here.

Toluca had 2 grade schools. St. Ann’s Catholic School, and Toluca Grade School. In grade school we were a very small group. I attended the Public School. Our classes sizes varied between 14 – 20. These pictures were supplied by Don Wettstein. His mom saved many of his things from school. This is why his name is written on the photos.

Vicky Peters father passed away, and she moved to Minonk for High School. Later in her early 20’s, she was killed in a car accident on Rt 51 on the way to work in Bloomington.

I attended the grade school for all but 4th and 5th. My parents divorced and I went to live with my grandmother in Kewanee. In 6th grade I returned as my mom thought I was then old enough to behave after school until she returned home from work.

Once we graduated 8th grade, St. Anns Catholic Grade School joined together with us for High School. Toluca High School was really a small school at this time, probably with an average enrollment of 130 kids. Everyone new each other. We enjoyed a great Basketball team through the years. It was the #1 sport in school and the whole town joined in supporting and cheering for the “Wildcats”. We were arch rivals of nearby Wenona High School. During our Junior year, our team actually made it to the Super Sectional, Sweet Sixteen, Thanks to the guidance of Coach Chuck Rolinski. We were defeated by a school with a 3000 Enrollment. Basketball was always the highlight of the school season. I can remember so many times the town would rally around the bus’s as the team came back after an important game. The sirens would be blaring and everyone cheering.

In 1887 Toluca was originated originally as a farming community, with the railroad coming through. It became the Santa Fe main line connecting Kansas City and Chicago. Eventually it carried the Passenger trains clear to Los Angeles California. It is now an Amtrak freight line . In 1892 the town became a booming coal mine town. Its population eventually grow to over 6000, settled mainly by Italians. You can still see evidence of this by the 2 coal mine slags piles that we call the Jumbos still to this day. This was the materials discarded after the coal was mined. The mines finally closed in 1924 due to the decreased need for coal. As kids, many of us would climb the Jumbo and look out over Toluca. A sight that is always so inspiring. To be up so high and see the whole town before you.

In front of you is the main street of town, all the different buildings, then beyond it becomes the farm land dotted with barns and homes. Every mile is a road. It looks like little squares of checkerboards extending to the horizon. Each checkerboard is different depending what stage the field is in. If you stay up their very long, you will hear a train in the distance. Soon, here it comes chugging away, “Toot Toot Toot”, in the distance until it passes the town right before you. As a kid, I crossed over the tracks many times. It was like an adventure to explore. The area was all grown up in weeds. Paths were their to access the Jumbo. Their was a small hay shed that we sometimes played in. The entrance to the mine shaft was still their, but a fence partioned it off. Nobody worried where you were. You were just enjoying the Adventure for the day.

Today Toluca is a small town of 1500 population and has formed the Toluca Coal Mine Association, preserving the area by developing a park and fishing pond. The history of the coal mines has been preserved for all future generations. The Jumbo is now covered with grass and a picnic table rests on the top. I actually climbed the Jumbo again in June of 2015. It was really a Long…Long…..Exhausting …Walk….lol.…Actually almost a crawl…….I had to stop several times to catch my breath…..But was so worth it. Their is nothing like the view of Toluca from on top of the Jumbo….Amazing…. 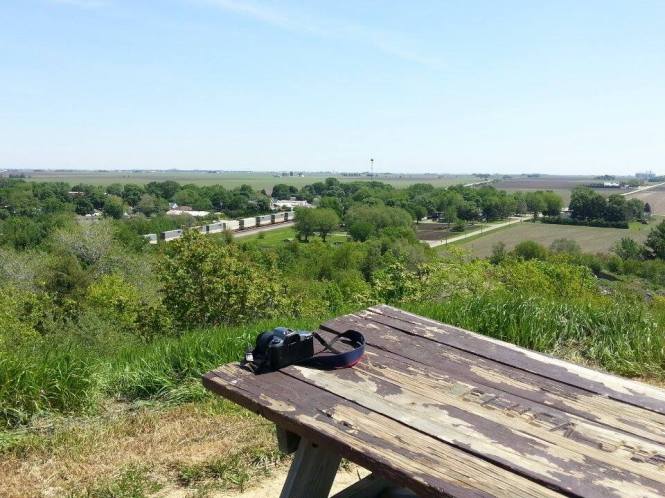 This is the future of all the small town schools. One by one they are all consolidating so they can afford to give our children a better education. So many hours and days we spent in this school…

What a Great Labor Day it has been. “50” years since we walked out those doors. We anxiously entered the real adult world. This school prepared us for today. It did a great job. ……So in 2023, we Shall All Do This Again….

SEE YOU ALL THEN

Heres an interesting fact for you: Did you know most of the Class of “68” was 68 years old on our 50th reunion? Also we were mostly born in the year 1950.