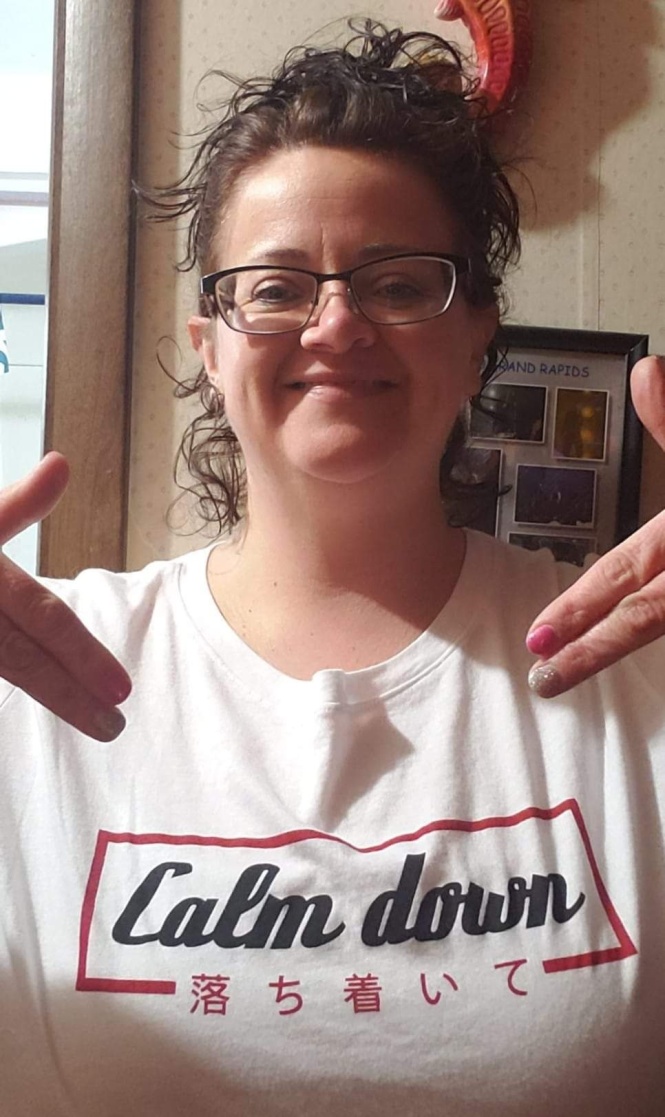 …Just 4 days ago, I was thinking if I should send Flowers or Balloons for your Birthday. Then the realization, that I couldn’t even do that, because its not an ESSENTIAL Business….Then Thur. you called me….“How would you feel about me going to New York”.….I took a moment to pause…..I know she is a devoted nurse, but even “THAT” I didn’t expect….I finally said “I don’t want you to, but I understand why and will support you if you go”. So 3 days later she arrived in New York and today is awaiting her assignment. 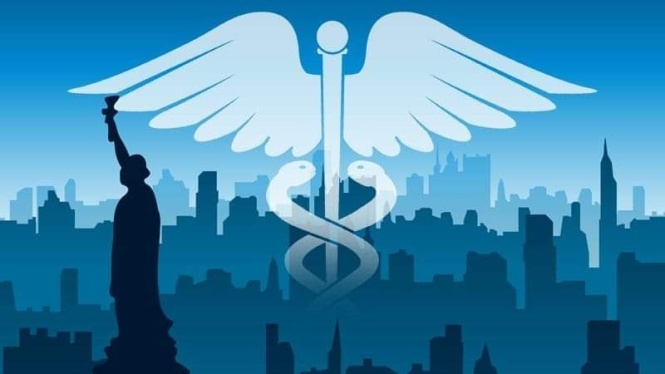 The Staffing Agency that is recruiting the medical field put out a call for 550 RN’s. This is the 2nd wave of hiring that I am aware of. Two of Tammy’s friends from Peoria were already their. On Friday the phone lines were opened and they were to stay opened until they hired the full amount. Tammy and her friend Brittney kept trying and finally made it through and were hired. They wanted them their by Sunday for Orientation..…Wow, that’s only 2 days. So plans happened fast. She talked with Tina, as Carly, who is 8 has been staying with her since the Virus broke out. Tina was on board with her going also. Tina has been an Amazing Sister. She has helped Tammy out so much with Carly. It is so hard finding a babysitter when you are a Nurse. Tina has always been their for her. Lately, Carly has been staying with Tina full time because of the Virus. Tammy could easily be a carrier as she works 2 different hospitals. So now Tina has Officially taking the responsibly of Carly while Tammy is gone and this Health scare is going on. Tina got to work and started lining up supplies.

She found a local supplier of Alcohol Antiseptic Solution. It cost her $255. Quite a bit. She is gave Tammy and Brittany each a bottle and a small spray bottle to refill. 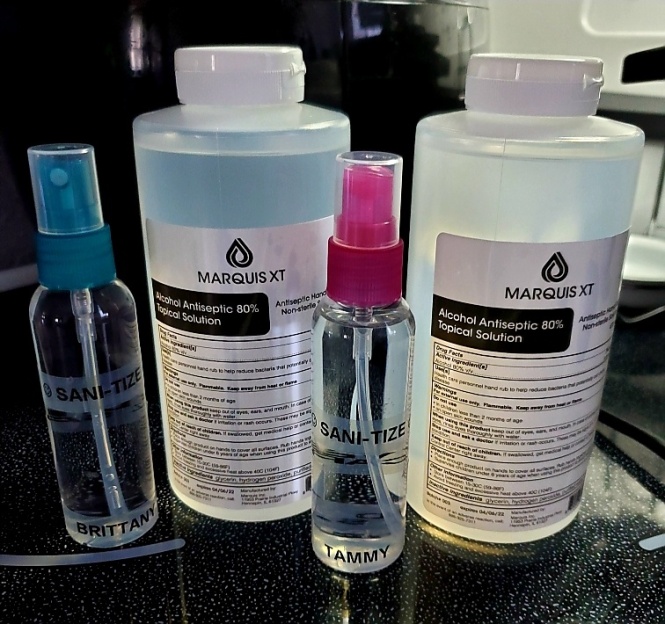 She personalized each bottle with their name and tinted Brittney’s blue. Tina also managed to get Clorox wipes, gloves, and masks from her Rotary friends. 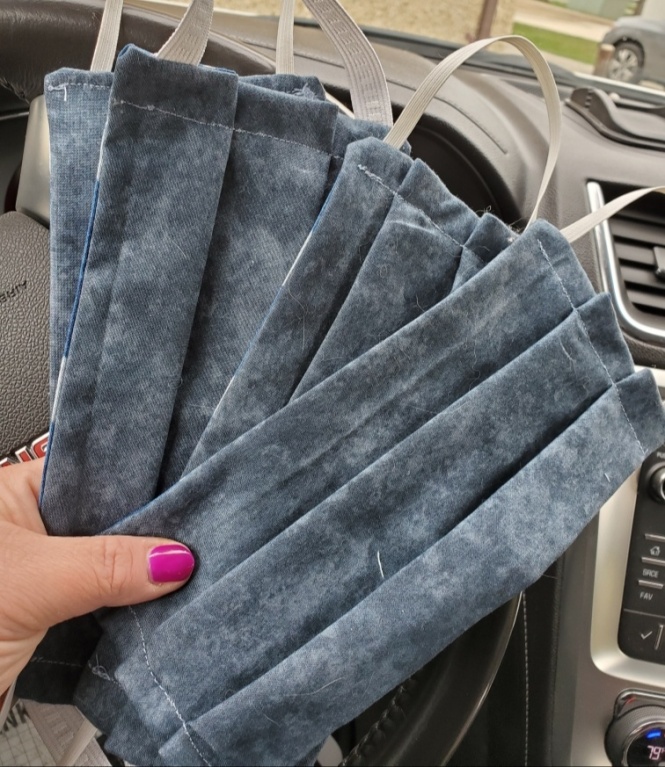 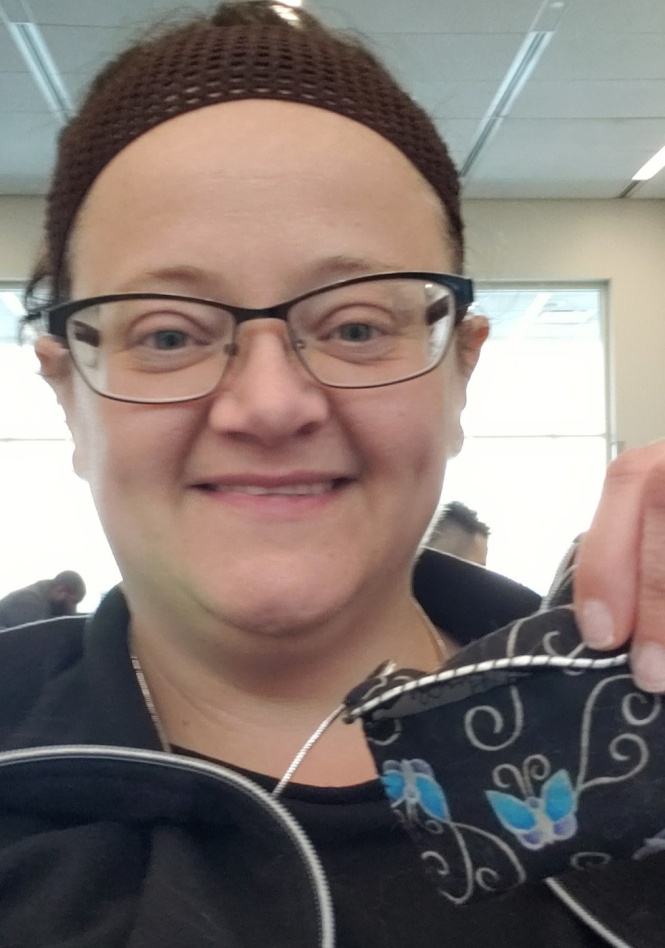 Aunt Connie also made her some masks, and also gave her a “Spirit Bag”…..It is suppose to keep her safe. Of course she had to stop and see Carly. Of course Carly doesn’t know she is leaving. All she knows is that her momma is saving peoples lives. It has to be very hard on a child to understand what is happening right now in the world. I can’t even imagine what a child would think when its her mom trying to save people. That had to have been so hard on them both…..Such emotional times. She also had to stop and say Goodby to Cassidy, her 16 year old, who was staying with friends. Then she went and seen her friend Kathrine who is a nurse in Peru. Kathrine had made her a GORGEOUS Birthday Cake.

It is FABULOUS and so detailed. The Statue of Liberty even has a mask on it. Katherine, it is so Beautiful.

So finally Sunday morning after packing all her supplies and clothes, Katherine and her mom came by and Tammy along with Cameron, her 21 year old son headed to Peoria. They stopped and picked up Brittney who is also a nurse, and then the 2 of them flew out on Delta, heading for NYC with a small layover in Atlanta.

They arrived around Noon at JFK Airport. Fortunately Brittney is Uber and Large city savy……lol….They took an Uber to the hotel for around $55. The Agency has put them in a Marriot in private rooms right on Times Square.

Times Square….Notice all the gratitude’s on the Marquis for all the help they are getting

This is her view from her window on the 17th floor. Brittney is on the 21st floor. She said that one of these buildings is where they drop the ball on New Years Eve. Her other 2 friends from OSF in Peoria are at a different hotel. One is in the Bronx. Their Orientation was 5pm Sunday nite. She had told me that she thinks they will be working 21 days straight. The bus will probably pick them up around 6am and they may not get back till 9pm.

So Today is Monday, April 6. It is her 42nd birthday. I talked with her this morning. They had to go to the Lobby and sign in. They don’t know if they will get an assignment today. They were told that once on the job, they might not have time to eat, so fill your pockets. They took a cab to Target and filled up on Groceries for their rooms. Their were many nurses in the Lobby waiting for their assignments. Tammy thinks they are a bit overwhelmed right now and they have more nurses arriving today. But they will get it together. I’m so glad she has Brittney with her and she is not alone. Times like this you need someone to talk with and lean on. At Orientation, they made it sound pretty grim. It was going to be difficult for them. They would see things and might be forced to do things that were not the norm. I’m sure they laid it on the line. When you watch tv and they interview the medical staff, it is really scary. The first Coronavirus case in New York was reported on March 1. Now as of April 6, their are 122,911 cases and 4161 deaths. In New York City alone, their are, 67,552 cases and 2,472 deaths. New York is scared and desperate. They have a shortage of ventilators, masks and other equipment. They are having to make judgment calls on life or death with many of the patients. So I hope that I will be able to talk to Tammy daily. She set up a family chat group for us all. My hope is that she will at least let us know every day that she is ok. It will be a long 3 weeks. We all Hope she stays safe and Healthy. 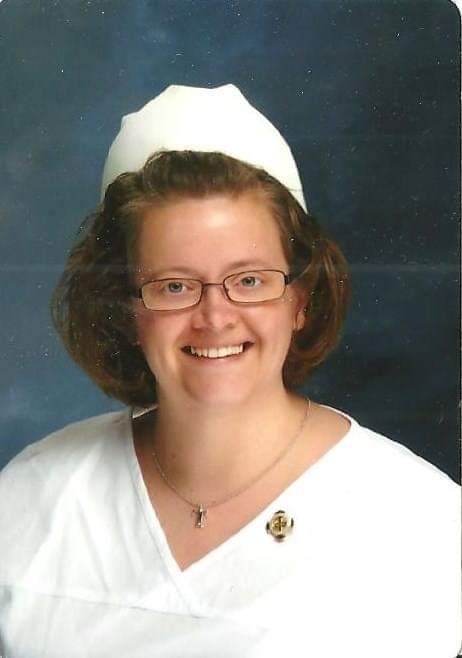 Tammy Graduated in the Summer of 2014 with her BSN. It was a long 5 years. She decided when she was in her 30’s and with 2 kids (single parent) that she wanted to do this. Scott had had an accident and lost his arm, and Ed, Tina’s husband had been in a 4 wheeler accident. Both were lucky to be alive. That’s when she decided she knew what she wanted. It became her passion. Of course being a single mom and no money she turned to the family. She formulated a plan. We all took turns Babysitting. Scott put her on his payroll so she had living money. Whoops #3, Carly showed up…..Small delay, but she persevered. Right after Carly was born, her Ex Boss Rita, from First Student Bus Company came to the house and took care of Carly. We also had a Baby Shower for her….All Diapers and Wipes…..lol…She had 2 years supply….It was Great…...Tina did her share of helping and babysitting. Brandy had her day to take Carly. I was babysitter/Taxi for Cassidy and Cameron after school. Even Aunt Connie helped when needed. On weekends she had friends help so she could study. Every semester we would get our new schedules to help her…..It was a Long….Long 5 years.….But she did it….Because she wanted it so badly, she applied herself and persevered…… 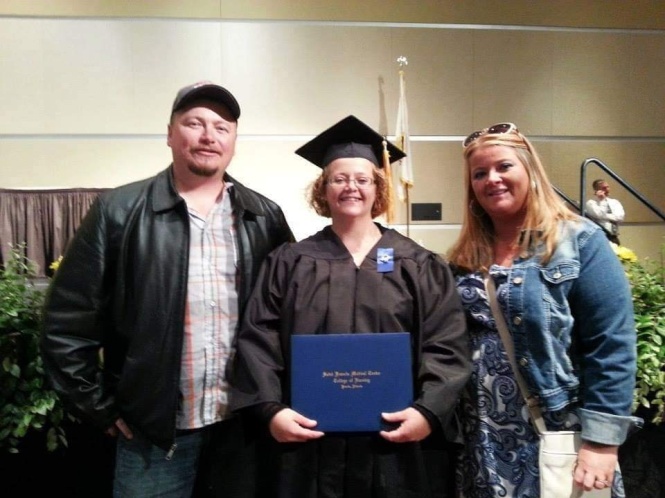 The whole family was behind her….”We ARE ALL SO PROUD OF YOU”… 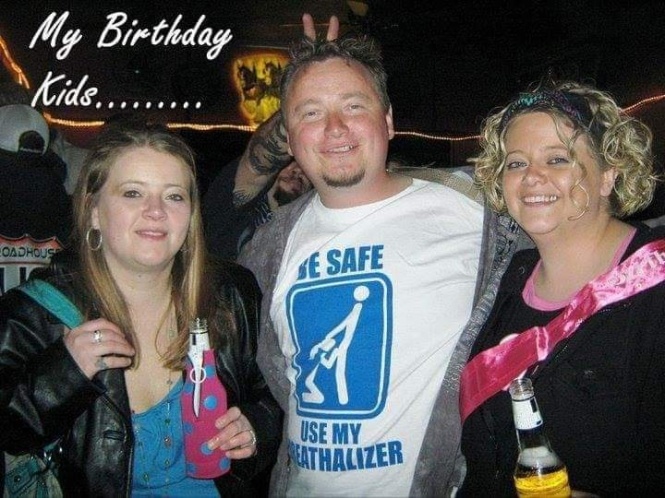 But it was a TEAM EFFORT……This is my Favorite Picture of the Kids….It was taken almost 9 years ago……..Tina, Scott, Tammy.…Their birthdays are all March and April. If it wasn’t for all 3 of them working as a team, Tammy would not have been able to achieve her dream. Now, I’m not implying they all get along….lol….You know theirs’s always sibling rivalry. I could go one forever with stories on that subject.

SO HAPPY BIRTHDAY TAMMY….STAY SAFE….YOUR COMPASSION FOR PEOPLE WILL PULL YOU THROUGH. WE ARE ALL HERE PRAYING. THEIR ARE MANY, MANY PEOPLE PRAYING FOR YOU, FOR ALL THE HEALTHCARE WORKERS ACROSS THE COUNTRY.

Well all this happened in just 4 days…..Whew…..Everyday is a Roller Coaster….