Sunday will be Day 21 for Tammy and Brittney.  I found out last nite they have extended for another week.  That doesn’t surprise me.  I know they are extremely exhausted and tired but they are so driven by their need to want to help.  Everything has been going fairly ok for them.  When they get back to the hotel at nite they are so tired.  They aren’t getting enough sleep, and I’m sure they aren’t eating right either.  I don’t hear from Brittney much, as her and Tammy have never worked in the same unit, but she is doing OK.  For some reason they move the nurses everyday to another department.  Maybe its so they don’t feel ties to the patients?  Its just my guess.  Some floors are better than others, but their is still a shortage of supplies.  Tammy told me she had a bad day the other day.  She finally told me she had been pretty upset and emotional.  The other regular staff nurses were rude, and unfriendly.  Every time she turned her back or left her cart, her supplies would disappear for a patient.  I guess when things are in short supply, other nurses just take whatever they need when they see it, because their patient needs it.  Then her patient would go without.  Of course she was the new kid on the block.   Later she found out why……That day was the funeral for a fellow nurse that had caught the virus.    She was a good friend of many of them.  So one can understand why they acted that way.  It has to be terrifying.  This is happening over and over in the hospitals.   So many in the medical field have given their lives trying to help the sick.  This is why they call this the ……FRONT LINES…..A couple of days ago, she took a day off.  She called it a ……MENTAL DAY….She slept in till 8:30am.  Her 4 other friends from OSF in Peoria where now their.

Their hotel is the Sheraton, several blocks away. They were still waiting for assignments. They all met that afternoon and went for a walk to Central Park.  It sure is a beautiful place right in the middle of New York City.

Tammy with the red bandana

They all received their assignments the next day.  Two are on days at Jacobi, one at Coney Island and 1 on nights at Lincoln.  She is still getting packages.  Yesterday she got some great stuff from a good friend in our park. 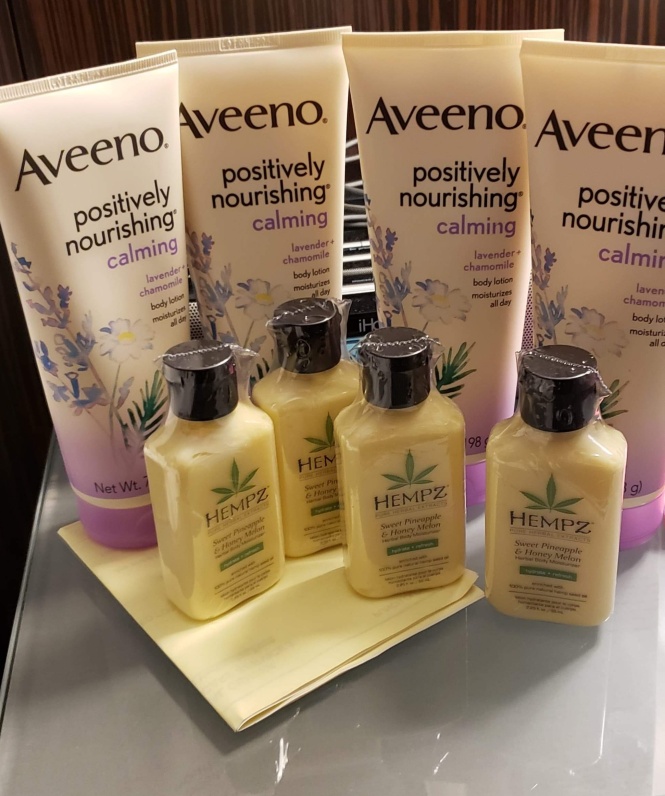 Very much needed lotion.  Their hands are so raw and cracked from all the hand washing all the time.  And some wonderful snacks….

Yesterday Tammy was pulled off the floor.  Her team lead had her help a nurse who was having a lot of problems and was overwhelmed.  That made her feel so good.  Her lead said she would be using her again when needed.  She ended her day feeling good.  The counts in New York City are still going up…147,297  confirmed…..2,995  new cases yesterday…15,074  deaths…..but it is slowing down.  Now the President is wanting to open up the Country.  Protests are beginning.  People think their freedom has been taken away.  They want to go back to work.  They don’t feel the virus is that bad.  Its no worse than the flu…..They think its a hoax…..The government wants the economy and unemployment to improve.  Of Course, we all do.  But many counts are still going up.  They haven’t slowed down enough.  They are going to have to be so careful.  I feel the  Virus will start to escalate again.  But that’s my feeling.  Hopefully they don’t…..As of today in the Valley we have 651 cases, and 20 deaths.  In Cameron Co, we have 344 cases with 14 deaths.  We are still going up, but many of those are from 2 nursing homes.

Around the country, many of the meat packing facility’s are becoming hot spots for employees.  JBS, Smithfield, and Tyson Foods are closing many of their plants due to many employees testing positive.  So what will happen to our meat prices now.  Thankfully our freezers are full right.  The city’s are starting to organize food giveaways for families.

This is Houston.  The cars are lined up for miles waiting to participate in the Food drive.  Here in Harlingen we have the Food Pantry, and Loaves and Fishes that help feed the low income and homeless.  The City of Harlingen has united with the RGV Food Bank has organized a food giveaway and have scheduled 2 more.  The cars were lined up 2 hours early for several miles to wait for their free food.   In Harlingen we are still under SHELTER IN PLACE till May 4.  Wear those face masks in public.  No kids in cars or in stores under 14.  But they are starting to loosen the rules.  Retail sale non essential stores are opening up with curbside, phone or internet sales.  State Parks are also opening with Social distancing and masks.  Hopefully this doesn’t backfire. 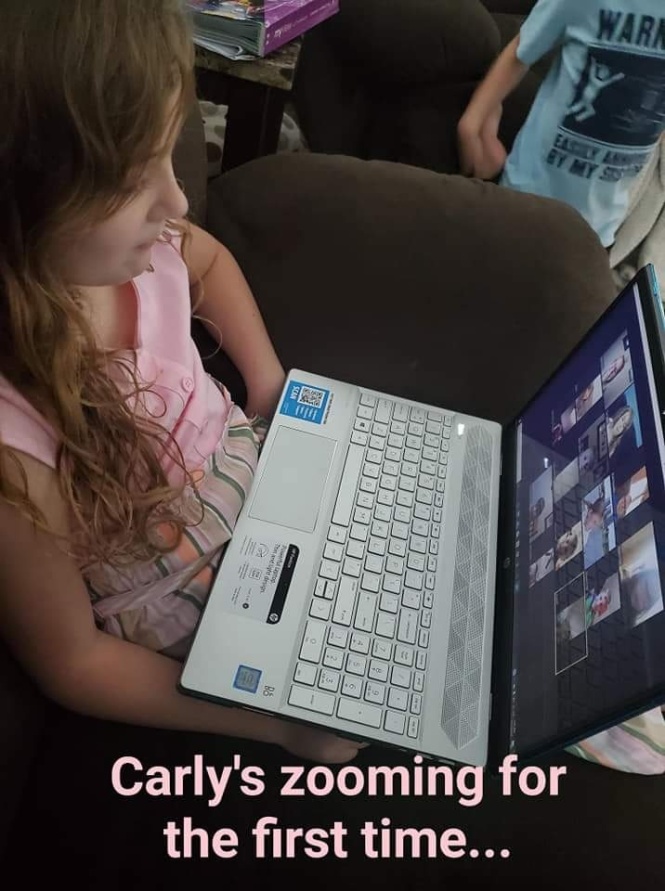 Carly is going to School on the Computer with Zoom…..Amazing to me…

PE on Zoom…..I guess that works….I’m sure 3 of them together makes PE easier….But knowing those 3, I bet they are rolling in laughter….

This has to be difficult for Austin.  He doesn’t sit still to well.  Poor Tina, conducting school with 3 different lesson plans.  That has to be very hard.  At least their not into Algebra or any of the harder subjects…..I don’t envy the parents these days.  They now have to be wives, mothers, and now teachers, 24 hrs a day.

It does look like an end in sight for New York City…..Tammy said theirs no new Nurses coming from their Staffing Agency that she knows of.  Lets hope that is true for everyone…..Hopefully in the next several weeks, all of the Medical Staff from around the country will be back home….and HEALTHY…..Hoping the City can take back their Hospitals and function in the manner they all were trained to do and want to do.