First thing I want to mention is, if you look at the top, I have added other pages. I finally figured that out.  Wow, I’m actually figuring out how to design this page.   ALL BY MYSELF!!!…..Amazing…At the top you will see titles….Home…About…Family…Little Beaver… I have added Family and Little Beaver…If you click on Family, you will see a slide show of some of our favorite family pics…Little Beaver will be pics of the Motor Home, but haven’t added those yet. I also think I will add a page called ….Crafts…I enjoy mosaic crafts and some others. So I will be adding some pics of my past projects. So check these pages out and stay tuned for the rest…lol

Well this morning I ventured back to the dentist at 8 am….so early….but it was time for my impressions….lol..whew…Glad that is done…but wasn’t as bad as I thought. I remembered before, they put all that gobbledy gook in your mouth and you had to wait 15 minutes for it to harden. “Just breath out your nose” they say. In the mean time, your nose is running and down your throat it goes, lol…You can’t swallow for fear your choke. So you sit their stone quiet. I tell myself. “Relax, Calm, Breath slowly, through the nose, slowly, its almost over, relax, calm.”…..Over and Over and OVer. In the mean time this big ass tray filled with gobbledy gook is filling your mouth to overflowing, and they have your mouth and lips spread out so huge….It has to harden before they take it out….Finally at last its over…spread the mouth wider and pull it out after it has hardened and sucked on to the teeth…or the teeth that is left…lol.. When Rich had his done, They had so much Gobbledy Gook packed in the teeth tray in his mouth, He said it was ready to run down his throat. He wanted to gag….Yuck… Well guess what. They have now invented a new faster drying gobbledy gook….Really wasn’t so bad. Less than 5 minutes, it had set and out it came. She was fast efficient and very nice. Second visit…score…A+….so so far not to bad.  Have all my dates set in stone now till the …GRAND FINALE….

Last Monday was Labor Day, and what an AWESOME DAY “WHY” cause I had it  “OFF”  My first Labor day in years that I haven’t been working.  It felt so good.  I kept telling myself, this is what the future will be….NO MORE WORKING ON HOLIDAYS…  Rich and I went to Toluca for their Annual Labor day Parade.  I grew up in Toluca, and the Labor Day celebration was the ultimate for the year.  I was comparable to Christmas … The carnival came to town.  The greatest time ever.  The only thing I hated was,  we usually started school the Wed. before, and the teachers still gave us homework on Friday….WHY….This was the biggest weekend of the year…..  No time for homework!!!!…..  My oldest grandson Cameron has been ridding his 4 wheeler in the parade for several years.  Not to advertise for anybody, but just to ride.  lol…He lives about a half hour from Toluca… This year, now that he is 16, he has been making lots of friends out of town….including Toluca.  They are all MUDDING friends…lol….They all go to the river and get their vehicles stuck.   Crazy isn’t it.  He rode his 4 wheeler in the parade and 2 of his buddies rode their mud infested trucks….lol…Cameron even had 2 girls on the back of his 4 wheeler.  It was a nice parade.  Hardly any floats though.  Mostly , Marching Bands, police and firetrucks, tractors, old cars, and the Shriners….They always put on a good show.  Their were 2 awesome Semis, pulling grain trailers.   They were painted a beautiful PINK….It was in honor of Cancer.   Too pretty to use on the job…  The most unique vehicle was a tank.   A water tank.   It was at the end of the parade, and it was shooting water into the crowd.  It would swivel back and forth and shoot water way out.   The guys on each side had water hoses and shot at the crowd.   On a “HOT” day, what a way to end the parade.

The Shriners…..Calliope in the back

Shriners in their little cars. …They have some great formations. They are in Toluca every year 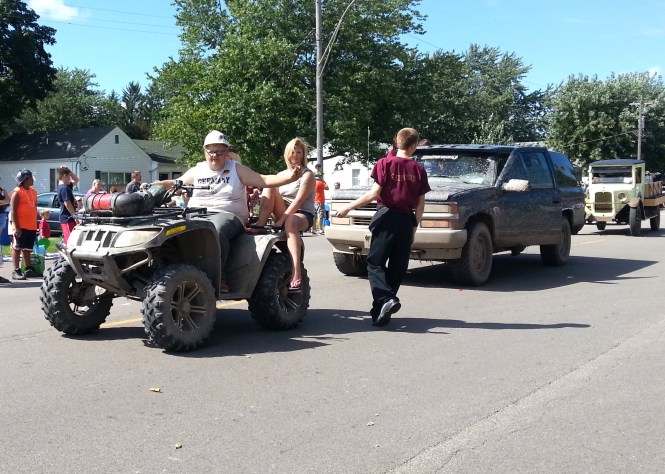 Cameron and his mudding friends

It has been raining this morning, but now it is over.  Sun is starting to shine.   I have to get some laundry done.   The dryer broke over a month ago.  Why fix it, or buy another.   We’ll be leaving soon.   So time to go hang out on the line……Who doesn’t like cardboard feeling towels?…lol…At least nothing shrinks this way…..till next time…………..