Week 2 of work is done….lol….not really work.  Actually we are both enjoying it.  I,ve have been answering phone calls, filing, taking rent payments, trying to help people with all their questions.  As many of you would agree, I am doing what I do BEST…..lol….Talking……….This week I started sorting mail, and working on the lot map, which consists of labeling all lots with peoples names.  It is used for the post man or the residents, to know where everyone lives.  Rich has been doing many repairs.  Now he is running to the hardware store himself to get what he needs.   Many people are coming in to the park after Christmas.  The park has over 20 mobile homes that are rented.  Their is always repairs to be done.  He has been doing some electrical repairs  now.  It seems like everyday in the office, someone comes in and has some problems with electric or water or something….

Standing in line for ice cream.        Rich is on the right, 2nd person….Seated in the back is Cici and Larry.   Our neighbors and good friends from Excelsior Springs Mo.  We went to McAllen with them to the parade last Saturday.

Wed. nite is ice cream nite.   Bring your own bowl and spoon and for $1.50, you can fill your bowl with handipped yummy ice cream. 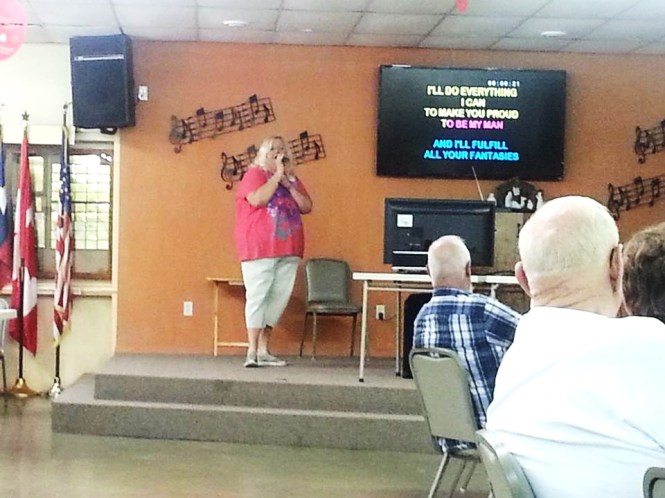 After ice cream was Karaoke.   Now that was rather fun.  Not to many people went up to sing, but the ones that did were good…. Thursday nite was potluck.   Now last week , I decided to make Taco Salad.  I went to the store to buy Western French.   Well guess what…..They don’t sell it here.   We went to Walmart and H.E.B.   Their are no Krogers, Hyvee, or Save Lot or Aldi’s…..NOTHING…..only H.E.B.  and  Walmart.   And would you guess what H.E.B. stands for?……lol Harold Edward Butts…..hahaha…..Harold Butts started it in 1919.    What a name….They are all over the southern Texas.  I stewed about this all week.  Back home in Illinois, it is in all grocery stores.  Even the restaurants’ serve it.  The name of the dressing is Western.   Now I consider Texas to be south West…..Why isn’t it for sale here?…..It became rather a joke around the friends.  lol  They told me to let it go…..hahaha…..Of course I said…..NO….. Well the other day I took another workamper, Lyn, with me and went shopping to San Benito Walmart,  ……I found WESTERN FRENCH DRESSING…..YES….I bought 4 bottles.  I was so excited, I ran to Cici’s and told them…..So I made the Taco Salad for the Potluck and nothing came home….lol…It was all gone. 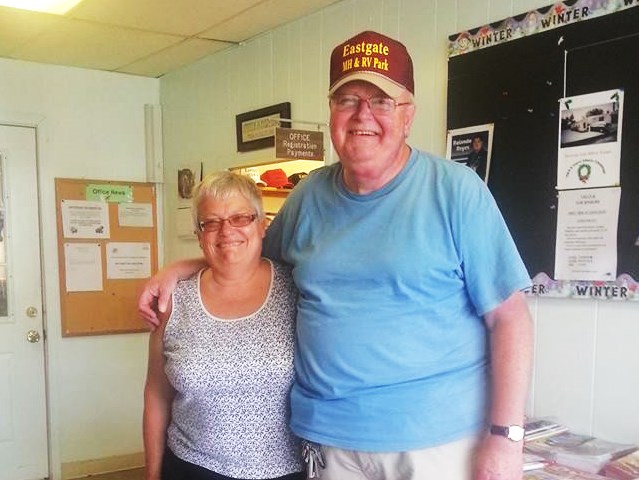 I will tell you about some of the people here.  The Park is run by Debbie and Rich.   Awesome Park Managers.  They have been very kind and lenient with us.  We can participate in anything we want to here and if it interferes with our work, we can just do our hours later.  They are so easy to work with.   But they are so busy.  They have over 300 lots and rental units to manage.  When they are in the office, they are being pulled in many different directions.  The other workamper that works in the office is Lyn.

She is the Activity director.  She is trying to put together the Camp Directory right now.  Very overwhelming.  She is doing her workamping as a single person, so she is working 22 hours plus.  She drives a motorhome but does not pull a vehicle.   So the other day I took Lyn shopping with me to San Benito, when I found the Western.

Now across from us is a couple who live here permanently.  Roberta, and Ken.   They are on disability and use to be tattoo artists in Missouri.  They also worked for animal rescue in the past.   They are a lover of all animals.  They have 2 birds 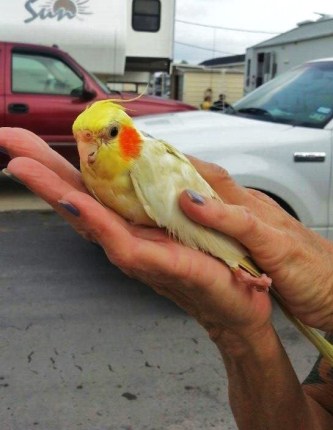 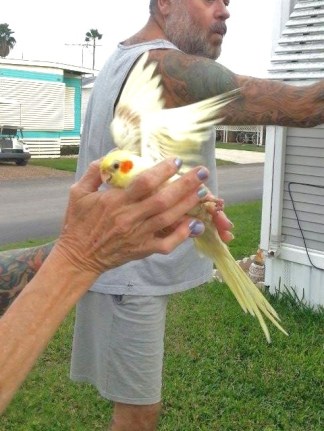 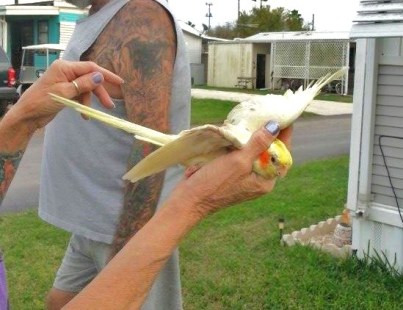 Lovie is a cockatoo….a beautiful little yellow bird.   But Lovie was stepped on as a new baby and had his hips broken.  He cannot stand or get around.   She holds him and takes care of him like a baby, even down to wiping his butt cause he can’t.  But he can fly and they have to be careful of that.    The other bird is a Beautiful McCaw…….

.Her name is Maui and she is 16 years old.    Now his wings were clipped as a baby, so he can’t fly.  They take him for rides on the gold cart to the trash bin.  So so gorgeous.

Cactus growing in the gutter….lol….Isn’t that crazy.. 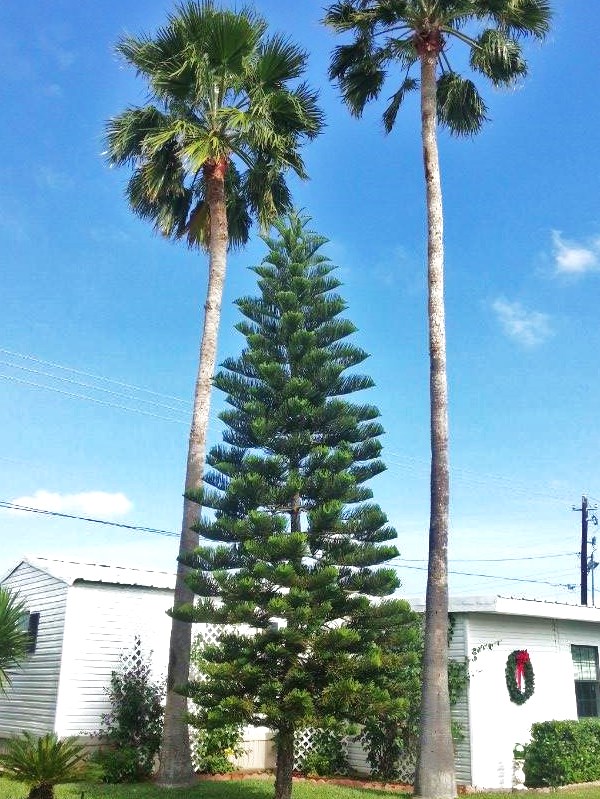 Now this looks like a Norfolk  Pine.   I don’t think it is but never know

This is pictures of the entrance from the office at nite.

And of course, here is Kitty again….He is really starting to enjoy this life.   He seems so much more active and happier since we are with him so much more… 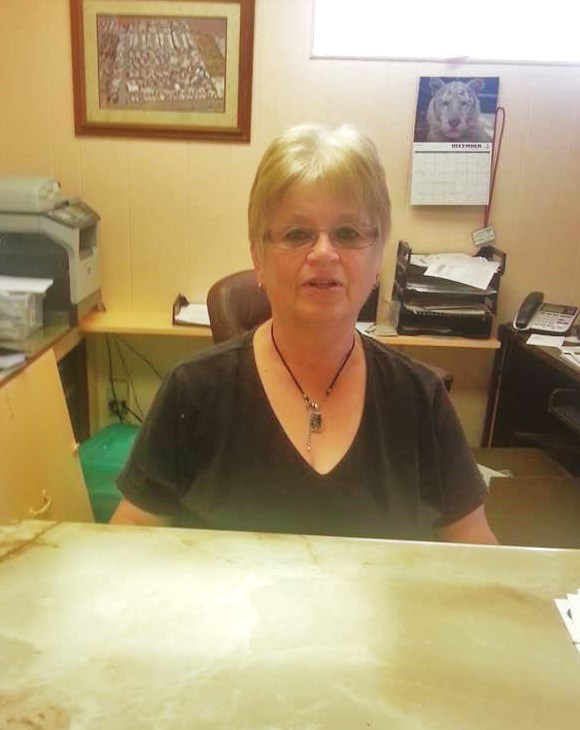 Of course I have to finish up with a picture of me.  This is my office…..Haha….or my window……Today I attended a Woodworking class, and also played pool with some ladies.  They play 6 days a week from 4 to 5;30.   I might be playing with them as a sub.   Like I said before their is so much to do all the time.   Tomorrow is breakfast again at the South hall.  Pancakes, sausage, biscuits and gravy, bacon, and eggs…..I think we might be going to South Padre Island with neighbors Cici and Larry.   Now that will be fun.    Let the sun shine for another day…..lol

One thought on “At Last…….I Found Western French Dressing…..”