Last year when we came down in late September, we seen the city workers climbing the trees in the Riverwalk area and hanging lights….I was hoping I would be able to see them lite before we went home that week end.  lol….Well It turns out, they start over 2 months early.  Its all for Chrismas.  It is quite a process.   At that time I wished I could see them some day all lite up.    Well my chance came, and its only a year later.

A little history on Riverwalk. The San Antonio River Walk (also known as Paseo del Río) is a network of walkways along the banks of the San Antonio River, one story beneath the streets of Downtown San Antonio, Texas, USA. Lined by bars, shops and restaurants, the River Walk is an important part of the city’s urban fabric and a tourist attraction in its own right. The Riverwalk is a pedestrian walkway, one level down from the automobile street.   The River Walk winds and loops under bridges as two parallel sidewalks lined with restaurants and shops, connecting the major tourist draws from the Alamo to Rivercenter Mall, to the Arneson River Theatre, to Marriage Island, to La Villita, to HemisFair Park, to the Tower Life Building, to the San Antonio Museum of Art, and the Pearl Brewery.  In 1939 the WPA  was in charge of the initial construction of a network of some 17,000 feet (5,200 m) of walkways, about twenty bridges, and extensive plantings including some of the bald cypress (others are several hundred years old) whose branches stretch up to ten stories and are visible from street level. In 1968 San Antonio hosted the Worlds Fair.  It was called Hemisfair 68 and the construction of the Convention Center and Tower of Americas was completed as well as many other buildings and sites.   The expansion extended the Riverwalk beyond its natural banks at the horseshoe bend to the new convention center and theater by excavating much of the block bordered by Commerce, Bowie, Market and Alamo Streets.  Today the Riverwalk consists of over 15 miles….It is really a place of Magic….below the streets of bustling traffic and city busses. 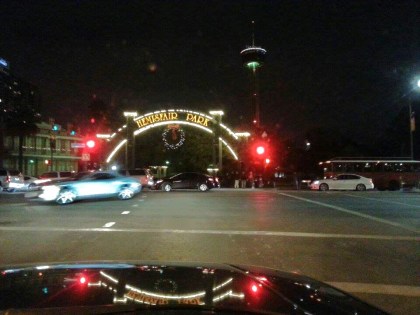 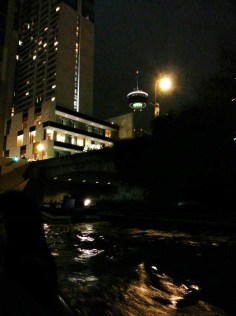 So we decided to leave Saturday morning.  We went up for breakfast with the other neighbors, Duanne and Cheryl.  After we came home we packed for an overniter and took off.  Now of course we decided someone should come in and check on Kitty.  Here we are abandoning him again, now in the Camper.   Who else better than my neighbor Roberta.  She has such a gift with animals.  She is the momma of the birds Maui and Lovelove, from one of my other blogs.  She was very gracious and said of course she would come over.  Roberta came over the nite before and fell in love with Kitty.  We felt safe that Kitty would be looked after with love and care.  So we took off for our 5 hour drive to San Antonio.  We got their around 3 and got a room at Econolodge.  Then we Looked up the nearest Longhorn Steakhouse….So away we went to feast on a Steak….

Thank You Advantage Log.  Darden Resturants #1 gift card……lol….We feasted on a $41  Porterhouse for 2….It was a 24 oz. steak…..mmmmm mmm good….Bill came to $51 plus tip.  Not bad at all.  Left with a doggie bag.   One for me…..baked potato and steak for breakfast and another one with the left over bone for our neighbor dog, Jill.  Jills mom and dad are Cici and Larry.  lol.  After that we headed for down town…..OMG….the crowd. 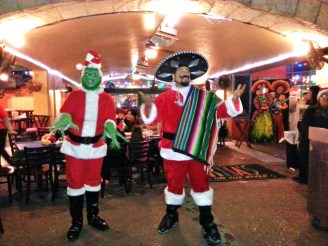 Now we were their last year and had it all figured out, but this year we lost our bearings.   Traffic was backed up every corner….wait….wait wait….stop…stop…go …stop…lol…Finally we found a $5 parking lot.  We waited for people to leave and then raced to see who could get it first.   Took us about an hour to park.  Finally made it down to Riverwalk.   OMG.  The people, but it was so beautiful.  The trees were all lite up and so were all the bars resturants , etc.  Now the trees lites all start in the top of a tree in a clump and then fall down in single strands….So much time and care to lite all the trees.  Their were over 6,000 luminaries lining the sidewalk by the river.  It was just DAZZLING.  We decided to buy tickets for the boat ride.  We took it last year and enjoyed it.  So we went to by tickets and then searched for the end of the line…..Wow….finally almost over a half a block later, we found the end.  While we were waiting, some of the boats were loaded with carolers singing Christmas carols as they floated by.  All laughing and having fun. 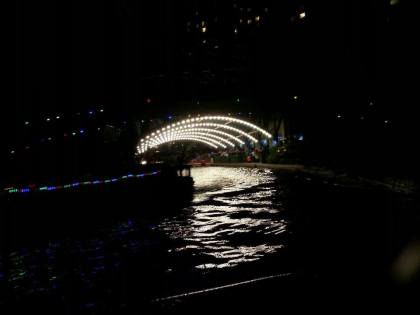 It moved much faster than we thought, and finally got our seat.  It is the best way to see all of the touristy area of the river.  It is magnificent.  The tour guide gives the tour and tells you all the facts, down to the building of the new parts of the river for the Worlds Fair.  Meanwhile you are just sitting their meandering down the river with the gorgeous lights overhead in the trees and the sounds of the people and the restaurants on the sidewalks.  Many of the restaurants have entertainment, like Mexican music or something jazzy.  It is a little bit of heaven.  A fairy tale.   Finally we got back to the boarding area, and the line was still long….Our guide told us their is over 42 boats for the river, and at least 40 were out.  So we finally made our way back to the truck and made our way out of the mad rush and back to our motel.  In the morning, I looked at fb and Roberta, who was watching Kitty posted a Wonderful post.  I have to repost it….So Beautiful…

They all worry about us when we don’t come home…there was a warm spot on the couch but Kitty must have heard me coming for he jumped off the dash when I opened the motor home door (he’s allowed) looked behind me for Mom and Dad but I was alone. The catnip mouse was nowhere in sight – I’m sure he knows where it is. He’s eaten, drank each time I’ve been there but the only solid matter left behind was from the first time. I tried to reassure him as best I could, verbally, he allowed me to pick him up and snuggle with him on the couch – even accepted a kiss on his head – for a few minutes he was a sweet little kitten again – then caught himself and jumped down to do figure 8’s around my legs and have ear scratches. But a couple of times he thought he heard something and ran to sit by the door and a couple of times he checked the bedroom as though to tell me they were supposed to be there… bless his heart! Now he’s fine, temperature inside comfortable, has a nightlight and filtered light from outside, and he’s somewhat of an independent fella. He would not have enjoyed himself had they taken him along. I asked that they leave the bed unmade so he could snuggle in the covers and be comforted by their smells – done. But it’s not the same of course. They did the best thing by letting him stay in his own environment. Wish there was more I could do – he’s such a sweet Spirit! He’ll sure be happy to see them walk through the door tomorrow. Wonder if they’ll be in trouble after he figures out they’re OK? Stay tuned….

Isn’t that just Beautiful……She is so Special.   She can read any animal and she loves them all.  So homeward bound…..Stopped at our favorite Restaurant on the way home….Choke Canyon Barbeque.  We got 4 sandwich’s of barbeque brisket….2 for us for supper and 2 for Roberta and Ken.  Finally returned home before dark.   Seen Roberta and gave her her sandwiches.  She so enjoyed Kitty.  He had the best of care, probably better than we give.  lol.   And then I went and gave Jill her bone….Of course she loved it.   Visited with Cici a bit and Now……….relaxing…. 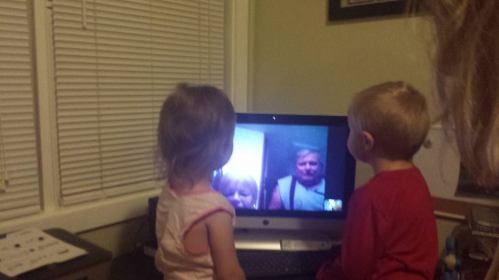 Christmas is almost here and we have downloaded Skype with the kids.  Here is a Pic of Austin, and Carly talking to Grandma and Grandpa….They were so cute.  They were so excited to see us and talk to us.  Carly kept looking under it and saying…..”Grandma, come out of their.”…so so cute…..So we will be Skyping with the kids for Christmas, and we have a Dinner planned here.   Rich is cooking for Christmas dinner for the Campground….I guess you can say we are the organizers……lol….That’s a whole nother Blog…….lol….