Today, Rich and I went with Cici and Larry, back to Padre Island again.  This time we are going to take a 4 hour boat ride down to Brownsville, to the Boat Scrapping Yard.  We have been hearing all about this boat ride and about the Navy boats in the yards for Scrapping.  The aircraft carrier that just arrived in January, was the USS. Constellation.

We arrived around 11:15….Their was this cute little shop in Port Isabel with all kinds of Wooden Pelicans outside.  Cici needed one…lol…”YES  needed one”….for the latest craft project.  We stopped and us girls went in…lol…Cici found a really cute Pelican and I found some Bamboo wind chimes really cheap.   I needed some more.  I have nice neighbors. They like chimes….lol…at least so far…. We arrived at the boat dock around 11:45.  We bought our tickets and finally boarded our boat.

We were really far back in line, so we just stayed on the main floor instead of going to the top.  It really was the best place to be cause we was able to watch our chef cook our dinner.  The sky was cloudy but it was still a pretty day.  Seen a dolphin but they weren’t very active.  As we cruised towards Brownsville, the cook started the dinner.  In the middle of the boat, he had a propane turkey fryer.  He filled it with water, then put in a huge spice packet.  He added the juice of at least 3 lemons.

All of this was being done as we cruised through the Port area.

Check out this plate….Potatoes, Brats, Corn, Bun, and Huge Shrimp…We had all the trimmings….seafood sauce or ketchup…whatever needed…and               All the drinks you wanted during the trip…… soda, water or beer….”Lots of beer”.. 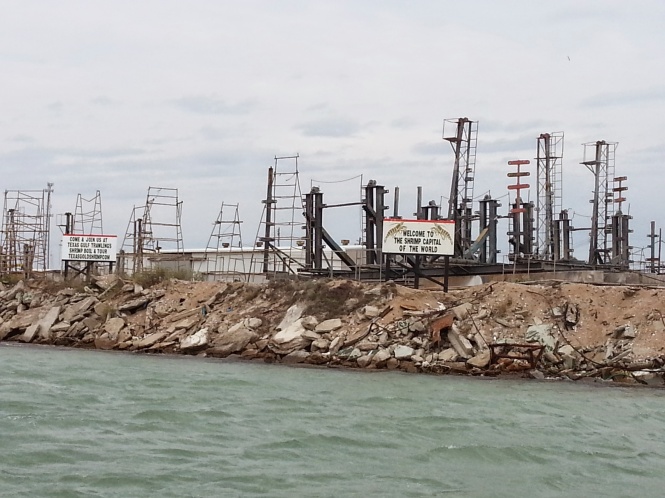 As we were heading down the channel towards Brownsville the first thing we came upon was the Shrimp Boat Basin….Port of Brownsville is the Shrimp Capital of the world.  The Basin holds around 250 shrimp boats and neighboring Port Isabel has 200 boats.

Most boats are out to sea for 50 to 60 days at a time during peak fishing season.  A boat holds 10,000-20,000 galloons of diesel fuel.  One of the boats in the picture had sunk and was tied to the one next to it.  lol.  Many of them had fallen into derelict stages.   You could see parts of the harbor that were taken care of and parts that was falling apart with time.  We left the basin and went on down to the shipyard.

They looked like huge ships in the distance, like………….. Ghost Ships…………..  But as you cruised closer, you could see they were just huge rusted, empty hulls of steel.  Some still in one piece, many being dismantled and ripped apart piece by piece from bow to stern.  We passed 2 old cruise ships, 1 half ripped apart already. So so sad.  I looked to see if I could find out the names of them but couldn’t, but can you imagine all the good times the people had on them.  The music , the food and the gaiety that rang through their halls.   And above all, if they could talk………The ports that they had visited.

Some cargo ships, but the most impressive was the 3 aircraft carriers. 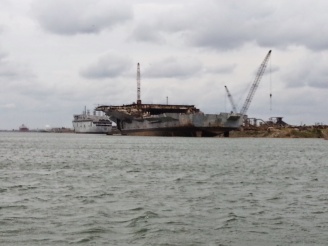 This is a close up of one of the carriers as it is being ripped apart.  You can see the interior doors that use to hustle and bustle with officers.  It is so sad that these vast ships cannot be saved somehow.  Their is so much history that has happened on these decks.   So many men have lost their lives and so many still live to remember the times on board.  Do a look up on Google on these 3 carriers and you will see some of the events in history that they served in.  Just amazing. 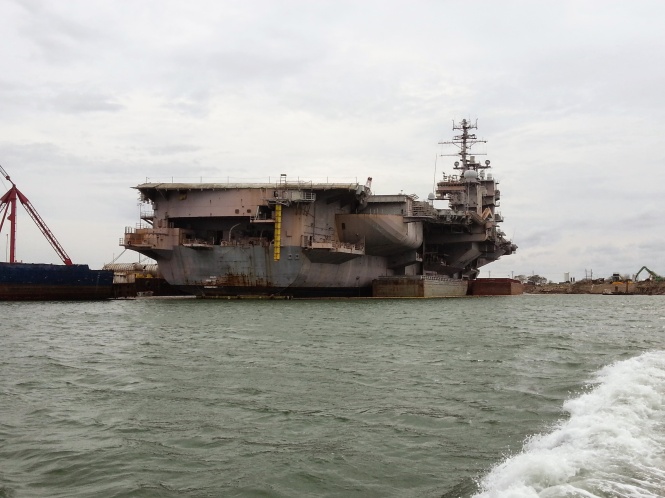 The USS Forrestal, the U.S. Navy’s first supercarrier, arrived in Brownsville in February 2014, and  The USS Saratoga, a Lexington-class aircraft carrier, arrived on September 12th 2014.

When the ships are taken out of commission, they are stripped down of all mechanics and valuables .   They have to be towed to Brownsville and arrive as just a shell of steel.  The companys strip anything else that may be of value and sell it.  They have an Ebay site as well as a local store.  The steel is cut up and recycled to be used again.  There are many more ships in navel graveyards waiting for this same last trip of Death………

He took us all around the ships and then headed back up the channel.

The channel is 17 miles long with a depth of 42 feet.  It is also the largest oil platform production site in America.

We cruised on back up to Port Isabel and cruised around their oil platform.

This platform has been towed in from the ocean for repairs.  The ship is now obsolete and is not used anymore.  It is being stored their for only $6000 a month.  The guide said its been their for around 7 years.  lol  Must be pocket change for them. 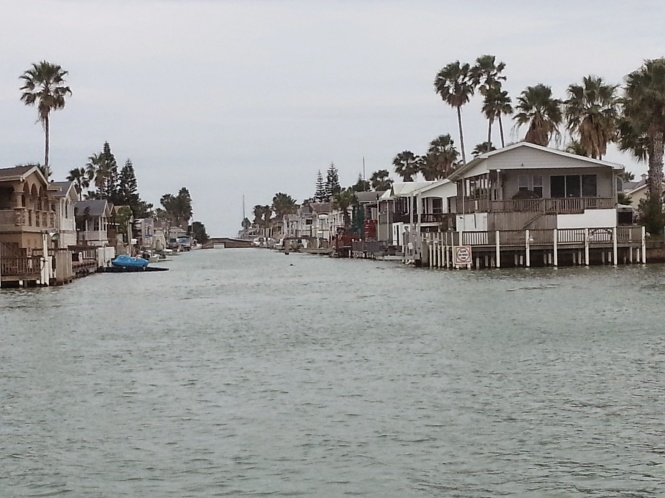 Then we entered an area where the beautiful homes were located on coves.  Each home had a dock at its back door…..Now how awesome is that…and Expensive?….lol….Finally we headed across the bay to Padre Island.

He made one more stop.  Cruised into the boat channel under the large span of the Causeway Bridge.  Two days after 9/11, a barge hit the bridge and took out a span…..It was kept low profile as it was a bad time in the country and it might be thought of as another attack….but it just was an awful accident. They had the bridge repaired with in several months.

Finally we headed back to Dock.  What a GREAT AFTERNOON it had been.  We didn’t have a very good seat to hear the guide on the PA system.  Actually I don’t think anyone did.   Something they need to fix.   We missed a lot of the details, but never the less. I took 118 photos….wow…Its hard to narrow them done to just a few. 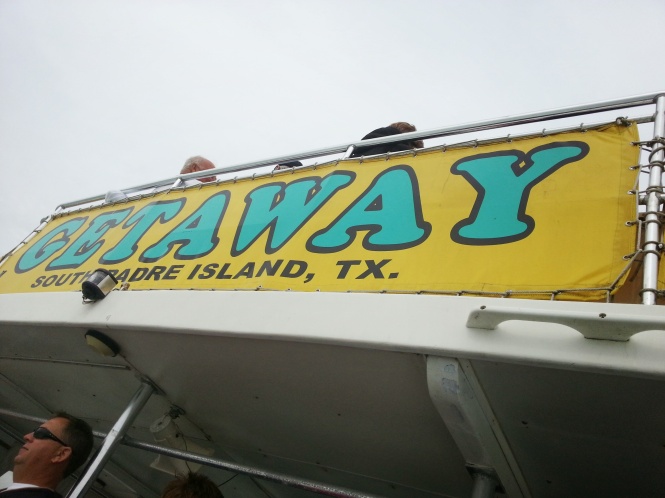