This week has been a fairly busy week.  Monday at the office we had to get the invitations out for our Appreciation Dinner for today (sunday).  The owner in Arizona had decided to treat all the residents to a dinner.  Our property managers were cooking, delivering and serving the meal.  The managers here, Debbie and Rick, only had to plan, organize and have the hall ready for the food when they came.  So last Monday we had to print over 300 invitations and stuff them all in the mail boxes.   All the residents had to sign up at the activity office for the early sitting….11:30….or the later sitting…..1:30…..   All of the employees and the Workampers were required to work with the setting up of the tables and serving the meal.   So we new it would be a busy weekend.

Also on Saturday, yesterday, was also the craft sale.  I wanted to have a table and display my bricks.  So all week I have been busy finishing the ones I had started.  I ended up with around 12 of them. I also experimented with putting gems around 2 clay flowerpot rims and grouted them.  They turned out really nice.  Friday the wind started up and became stronger and stronger.  The wind was over 30 miles an hour sustained, with gust over 40.   We have had a 12 x 12 awning by the trailer.  It has blown over so many times.   We keep putting it back up.  the frame around the top was so bent out of shape, Rich got 2 lengths of PVC pipe to support it.  It has been strapped down on all 4 corners.  All my craft stuff has been under the canopy along with my tables.   Well Friday nite it finally bite the dust…..Hahaha….Its last Hurrah…..I came home from the store and 1 leg had been twisted off of the frame….I put it back and readjusted the straps.  Several hours later 2 legs gave out…..Now it was barely standing on 2 legs…..So at last we let it rest…..lol….Down it came….Its life is at an end….Oh Well…

So Saturday morning I climbed under to get the rest of my bricks out and found that 2 had hit the concrete.   One survived but the other has some shattered pieces.   Now I will have to do some repair work.  So I brought all my bricks up to the hall for the craft sale and had a good time….I sold 4.  That is really pretty good as the sale was only for 2 hours. 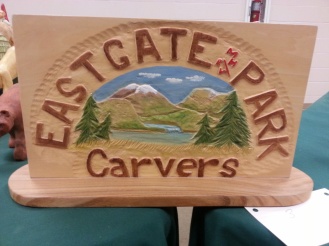 We also had a display table of the Eastgate Woodcarvers.  We had a Woodcarvers Show in town several weeks ago, and our club entered 4 items and we all won Blue Ribbons…..EVEN ME…..lol….Imagine that. 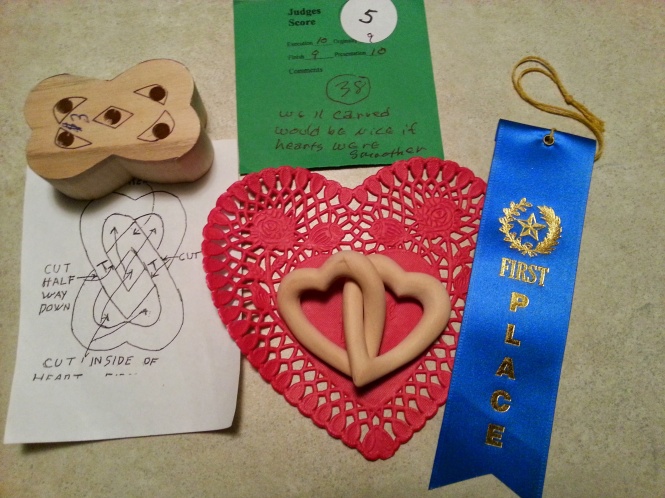 I had made a set of intertwining hearts….In the Picture you can see the block of wood I started with and then the finished hearts.

These Cowboy Boot Earring are made by one of our seasoned Woodcarver “Willy” Williams.

This cross is a very interesting piece.  Such intricate carving to accomplish this.

Heres some other items carved by Barb….I love her Duck Pond, and her paint brushes

So today is Sunday and it was the Appreciation Dinner.  I had wanted to decorate as no one seems to do much of that.   What is the cheapest thing to do?   Of Course Balloons.   lol…….  Debbie bought a big bag of balloons to blow up.  I blew most of them up at home and brought 2 huge garbage bags filled up with balloons on the golf cart up to the hall.  Lynn the Activity girl, met me at the office at 9 so we could get them ready.   We tied them in clusters of 2 apiece to a piece of  yarn to make streamers.   Church was in the hall till 10 am. so after they were done we put balloons at all the windows, at the serving window …..in the entry way….inside and out….lol…..Looked rather nice….Well the Dinner went well……It went off like clock work…..We served Sloppy Joes, Baked Beans, pickles, chips, and cake.  In between the 2 sittings, we had to wash down the tables and set up silverware and cake again.  We served over 300 people….We had the Karaoke couple from the park playing music and singing.. ..Everyone had a good time.    We all cleaned up, put the tables and chairs back in place. and was home before 4:30…..But so so tired  After it was all over, I realized, I didn’t even take any pictures….I was to busy.  Darn………So tomorrow we have the DAY OFF………….YEaaaaaaaaaaaaaaaaaa….

So that was our week…..lol… 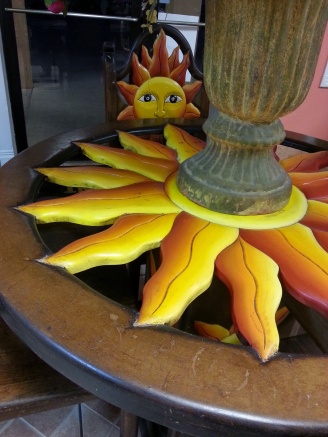 We were in a Restaurant last week and seen this Beautiful Table and Flower Arrangement….I thought it was just so SO BEAUTIFUL….. 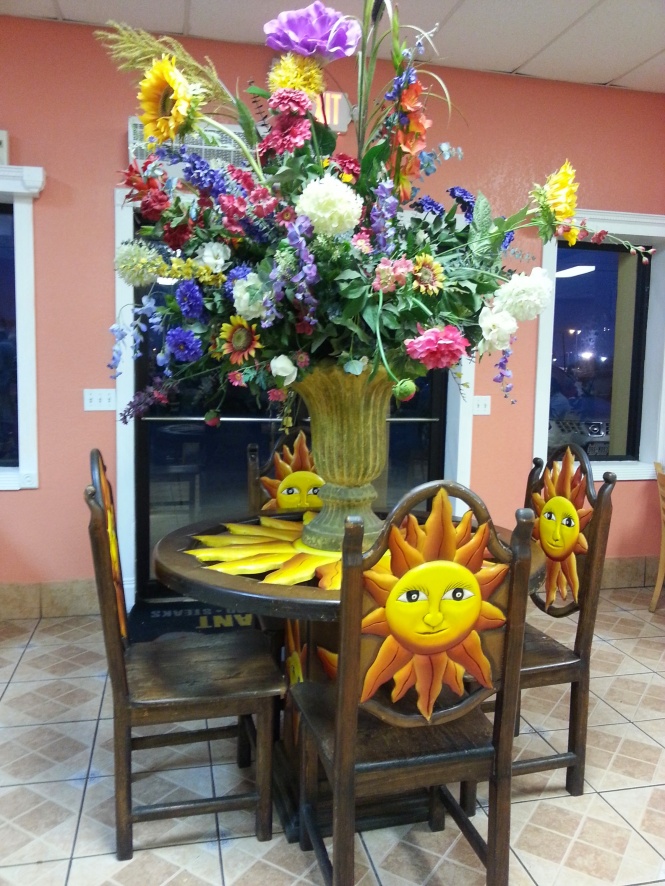