Today, the weather was really cold…lol..at least for South Texas.  lol.  We had several warm days this week, it reached mid 70’s.  It felt so so good.  Larry and Cici invited us to go to Brownsville to the Charro Days Fiesta Parade.  We decided to go instead of going to Progresso.

So we also decided to go to our other friends, Cheryl and Linda, (sisters), and install their new TV on Friday instead of Saturday.  They live at Tropic Winds which is by the Airport only about a mile away.  In the summer, they  live near Spring Valley Il.  which is near our home.  They are friends of our daughter Tammys.  Cheryl bought a new flat screen tv and need Rich to install it.  We drove up to their house and Rich installed the TV above their fireplace.   We had a nice visit with them and came home after dark.

So this morning we got up and Rich fixed breakfast.  Bacon, Eggs and toast….He makes breakfast most of the time.  lol   We walked over to Cicis, and left around 10 am.  The temperature was horrible.  We wore winter coats and brought umbrellas as rain was predicted.  Brownsville was only an hour away or less.  We were able to park about 3 blocks away.   They had rows and rows of chairs lining the streets.  They went in both directions for blocks.   They were rented for $3 a chair.  Now figure that up.   A nice little tidy sum, I believe.  lol.  After we picked out our chairs, we went into the nearest restaurant and had a light lunch.  It was so cold outside already.  Finally at 12:30 the parade started.

The parade has been celebrated since 1937.  Brownsville residents and visitors dress in the traditional costumes of Mexico and honor the Mexican cowboys — the Charros — who were heroes of the borderlands.   Charro Days  celebrate what made Brownsville unique: Its location on the border with Mexico and the rich cultural heritage enjoyed by Brownsville’s residents.  Over the years, Brownsville’s sister city of Matamoros has always been a key participant with Fiestas Mexicanas. In years gone by, international bridges were open during Charro Days, allowing family and friends to share the festivities. Even today, ties between the sister cities are celebrated each year with “Hands Across the Bridge”. In this ceremony of friendship, the mayors of Brownsville and Matamoros meet to officially began the celebrations.

The parade was full of floats with Mexican music,  live musicians and dancing lady’s,  all dressed in the traditional beautiful costumes.  Full of color and glitter. 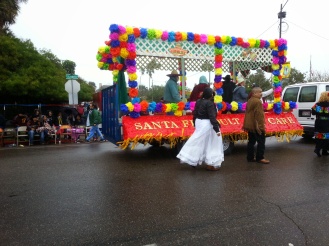 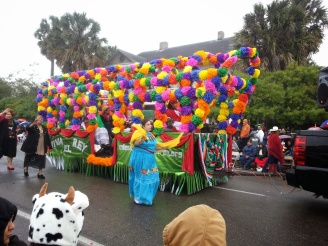 They also had 2 floats from Adult Day Care Centers, with their clients on the float dressed in costume and waving.

Their were many dancing Horses and others, just so beautiful.  Also some cowboys throwing their lassos and jumping through the loops.  Very Cool to watch…..

Several floats were from Matamoros Mexico, right across the Rio Grande. There were a huge display of Border Patrol agents.   Many of the cars and truck and Many of the agents walking the parade route.  They also had some of them on horses.

The Shriners Club were their and put on a nice display.

Also some Harleys were their.  Some dressers and 3 wheelers.   Really nice……So finally it was after 2:30, it was raining.  We had the umbrellas out, and we were so so cold and wet.  We decided to leave after we seen #109 float.   They were still coming down the road.  Really a long parade.  So after a stop at Harbor Freight, we arrived home around 4:30.

I would like to give you an Update on our Girls, staying in the Park.  Denim and Diamonds.   Georgina and Jami were Awarded the River Grand Valleys Best Group of the Year 2015.   They had their picture on the front page of the Winter Texan last Thursday. 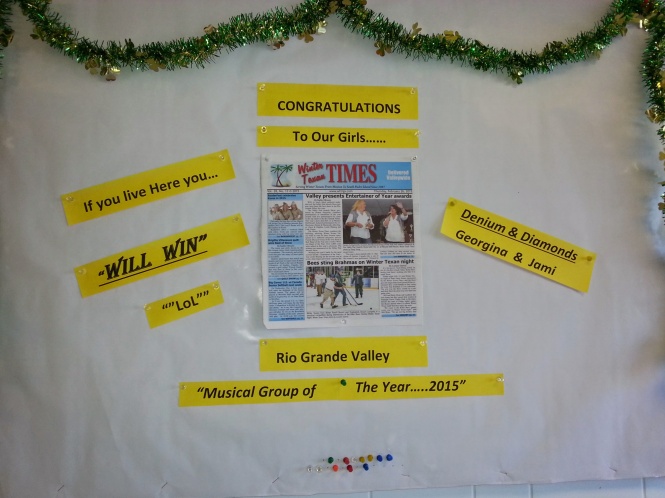 We put the front page on the Bulletin Board in the Office and Congratulated them.  They have been trying so hard to build their performance and they sure are.  They have been a great success, due to some pretty hard work.  They will be performing in Branson this summer, so if you happen to go, look for them as the duo or separately.  Georgina plays at the Uptown.  We are all proud to have them staying in our park.  We will be going to Tropic Winds on March 13th, to see them again.

Well tomorrow we will go to Progresso to do a little shopping…lol..(little white pills)….lol…The weather is suppose to be back in the 70’s…..Hate these waves of cold but, still better than up north.  I watch the weather from home and just shudder……..

One thought on “We Went to Brownsville Texas today to the Charro Days Fiesta Parade….”