Technically our contract as Workampers is over, but we still are working, well Rich is….lol….  We are still here for a few more days, so why not. lol.  But last Thur. was a beautiful day and everything is so slow now, we took the day off and went to Brownsville.  Now if you look at the map, and find Brownsville, you will see the channel from the Gulf is called the Port of Brownsville.  It is where the salvage and ripping apart of the ships is located.  The highway on the north side is #48 and takes you to Port Isabel and Padre Island.  On the south side of the channel almost to Mexico is #4.  It dead ends after 20 miles into the Gulf of Mexico.  It is a desolate but beautiful drive.  So this was our exploration for the day.

We took the south route out of Brownsville, #4, also known as Boca Chica Highway. We passed a checkpoint but only have to stop on the way back.  Later I realized we were just a short distance from Mexico border.  Like probably a half a mile or less in spots.  As we drove down this road we could see the Port of Brownsville ship yards in the distance.  Such beautiful scenery.  With all the rain, the palm trees, grasses, and cactus are so green and healthy.  The land was full of greenery and also marshy.  As we made our way out we passed a small town called Boca Chica Village.  We would explore it later.  Two miles later we came upon sand dunes…..and then a sign the said………..”Pavement Ends”……….and it did…..lol 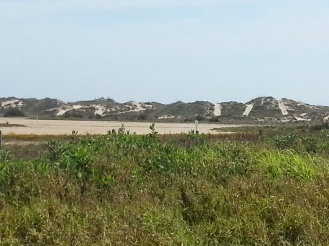 We drove through the sand dunes and the pavement ended, right into the Gulf of Mexico.   What a beautiful sight.  This is also Boca Chica State Park.  It is full of sand dunes and miles and miles of beautiful sand beach’s.  The County of Cameron had their city dump truck and endloader there.  They were pushing the sand back into the water.

The waves and tide bring the sand in and cover the road.  We drove past them and onto the beach and parked.  Several cars and trucks passed us as we sat their and drove down the beach into oblivion.  I got out and walked a little.  The water was a little cold but the sand was so smooth and pristine.  Just untouched.  The sound of the waves lapping the beach and the birds flying overhead was just so peaceful and beautiful.

Everytime you made prints, the waves came in and covered them up.  All the birds were flying and landing on the beach and enjoying the sun and the wind.  After a few minutes we noticed the waves were coming up higher and higher.  Rich was afraid the truck might get stuck…..lol….so we turned around and left.  So back we go to explore everything we passed on the way in.  First stop ……Boca Chica Village….. 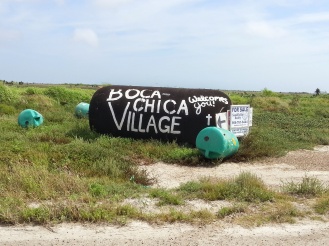 It is the only sign of civilization in sight.  Its only off the highway about 2 blocks.  We drove in and made the left turn and this is what we seen.   A deteriorating road with 32 ranch style houses, some in good shape, but most also falling apart.  Each house had huge plastic drums of potable water.  The road had a Boulevard in the middle with palm trees, sago palms and cactus.

Upon checking the history of this little town, I found that it was built in 1967 by John Caputa, a Chicagoan property developer, and was initially aimed at working class Polish migrants.[3] Shortly after building a community of 32 ranch-style houses, and naming it Kennedy Shores, the settlement was devastated by Hurricane Beulah later that year, which destroyed the restaurant and public utility systems. Electricity was restored, but many of the homes did not have potable water even decades later.

In 1975, local resident Stanley Piotrowicz was voted in as town mayor, who renamed the village Kopernik Shores after Nicolaus Copernicus, and attempted to have the village recognised as an incorporated community, but this was denied. In 1990 and 2000, the population was 26 people.

As of 2008, only 6 people were permanently living in the village.  Today, only 2 families live their full time.  The rest are a mix of 13 renters and Winter Texans.  As we went to drive out of town, their was this beautiful Shrine on the corner sunk into a corner of planted overgrown long needle soft evergreen trees. 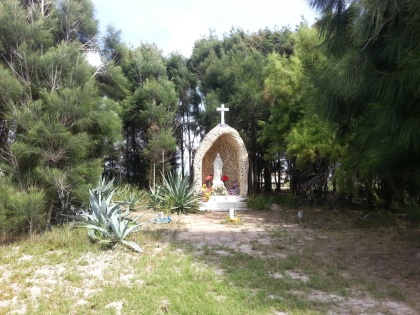 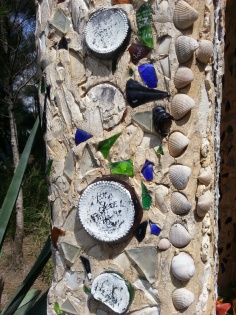 It was constructed with concrete and stone with bottles, colored glass pieces, and shells pressed in to decorate.

The  statue of Christ was in the middle with old colorful weathered flowers surrounding it.  So beautiful. Back to the highway we went.  This area is also full of history.  We passed several historical markers.  This area was where some of the last battles were fought of the Civil War with the Blue and the Gray.  The battlegrounds look just as desolate as they did back in the Civil War Days.

As we drove on there were several miles of cleared land.  Cleared of all trees, cactus’s and grass’s.  This is were they are building SpaceX.  SpaceX, started by billionaire and PayPal founder Elon Musk, is building the spaceport over 50 acres of privately-owned land at the end of Texas Highway 4 and be launch-ready in about two years. The complex, which will include a rocket launch site, launch command center and ground tracking station, will do up to 12 launches a year.  Right now it is only permited to do cargo launch’s.  The owner has hopes that someday they will do manned launches.

On down the road, we finally came back to the checkpoint.  The 2 Border Patrol agents stood on each side, and asked pleasantly but professionally questions as to where we had been, and where we were from.   I thought they might check the back of the truck as it was covered, but they didn’t.  So on we went, back into Brownsville.  We got on #48 which follows the Port on the north side and ends up in Port Isabel, by South Padre Island.  We passed the shipyards, where the ships were being scrapped, and next went to the Shrimp boat basin.  We had been in this basin full of shimp boats when we were on the Boat Tour.  It had a much better view from the boat.   On land it was much harder to see.  We did find a public access point were they sold shrimp, so we drove in and walked around. 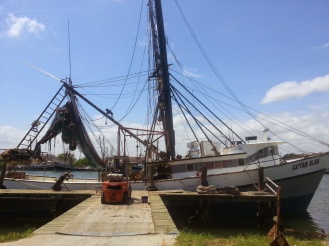 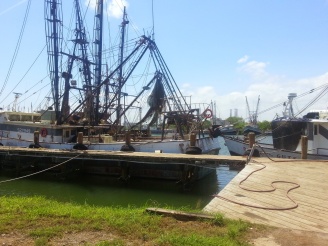 The first boat I seen was Captain Bligh.  Rather Humorous I thought.

The water was so clear.  Right now is off season, their was a lot of maintenance going on…….We drove the rest of the way to Port Isabel, which was around 15 miles.  We passed many lagoons, water inlets and sand areas.  Some places, their were screens along the side of the road to keep the blowing sand off the road……Rich said it reminded him of the Salt Flats of Utah.

After we arrived at Port Isabel, we headed home for the 45 min. drive.    We had been invited to Deb and Ricks, the Park Managers, for Happy Hour at 4……..So we made it in time and enjoyed a beautiful evening under their carport, visiting with several neighbors watching the sun go down………