We took a trip down the Rio Grande, which is the dividing line between Mexico and United States.  Mexico was on one side, while the US. was on the other.  This was located in Mission Tx. which is about an hour drive.  We went with our friends, Cici and Larry.  They had went before and so enjoyed it, they wanted to go back.

We drove to the Riverside Club and first had lunch.  Our reservations were for 1 pm.  We had about 45 mins.  The restaurant was rather touristy….A fun place.  They actually had down home deep fried tenderloins, the huuuuge ones.  Of course that’s what we had.  It was really a neat place.  They have seating inside, outside or under the canopy by the boat dock.  Such a pretty comfortable setting.

After we ate, we boarded Riverside Dreamer, which is a 55 ft. pontoon boat, which is enclosed and has A/C, heat, bathrooms and cushioned seating for 49 people.  We finally took off for our trip.  It was strange, knowing the Mexican border was the other side of the river.

The first place we passed was an RV Park on the US. side.  It was located at Chimney Rock.  It was the place of an old irrigation pump and the Chimney was still left.

The Campground was really nice, but right by the boat launch was a police tower.

They telescope up so the Border Patrol can watch for Illegals crossing the river.  The river was so peaceful and calm that day.  The sky so beautiful blue.  Now on the Mexican side we seem some beautiful homes.

This one had been possibly been connected to the Cartel at one time.  Who knows, made it still is…..lol.. 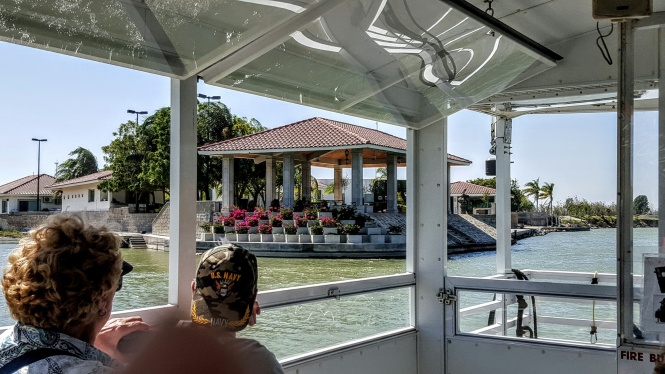 They had a beautiful flower garden by one side.

On the rivers edge was a glass front building, with tinted glass.  It was full of exercise equipment.

Another home was also very lavish in design.  At the end of the white arches was a waterfall.  But on the other hand, their was a lot of run down places in disrepair.

This place had been a resort at one time.  It is hard to see in the pictures, how large it was at one time and elaborate.  In 2010, Hurricane Alex came in and destroyed much of the land.  The river rose and everything was under water about a month.  Their are several lakes up river that had to open their flood gates because of excess water.  This resort and several others, were never repaired again.  So they now just sit here falling into disrepair.

Now on the US. side, we seen many sugar cane fields.  Theirs also The Bentsen State Park that covers many acres all the way to the river.

Also their are many homes along the river.

We seen lots of wild life, these Egrets, some turtles, ducks, even some cows on the rivers edge drinking the water.  Finally after an hour and fifteen minutes, we turned around for the trip back.

This is a border patrol boat.

Now this was on the Mexican side also.  It is a really cool area to have a party.  And the boat was down below docked ready for action.  Now as I looked around I wondered what is to keep the Mexicans from coming across.  There were many desolate areas on both sides where it would be easy for anyone to cross and not be seen. I finally asked the boat Capitan.  He said the river current is bad, and some die, but he said it is nothing to see everyday a boat go up river with only 1 and come back loaded…..a jet ski go up river and come back with another person.  He said if you stay in the valley after you cross, you have a 90 percent chance of making it and staying.  Many of these illegals have been living in the valley for generations. We also seen a fisherman on the US side.   I asked what the rules were for them.  Mexicans and US citizens can freely fish in a boat in the river.  It is only illegal if they dock on the other side.  Now it is so desolate in some areas, nobody would see if they brought anyone over to the other side and docked.  He said that their is over 400 miles of fence.  We have seen a lot of it, but thousands of other miles that still need fence.  He said it would take years to build one complete fence from the Pacific to the Gulf.  It would be so costly, and their are so many property owners, they would have to take much of the property by eminent domain.  It would be tied up in the courts for along time.   Just with what we seen, it would affect the Riverside Club and the Rv Park as well as many homes.  We finally arrived back at our dock.   What a Wonderful trip it had been.  Beautiful weather, and the river was so pretty and serene.  The sky was blue and the breeze gently blew….Perfect….We walked around awhile, and also seen another huge building here at the Riverside Club.  They have entertainment many nights of the week.  I think this could be a great car pool road trip for Eastgate next year.