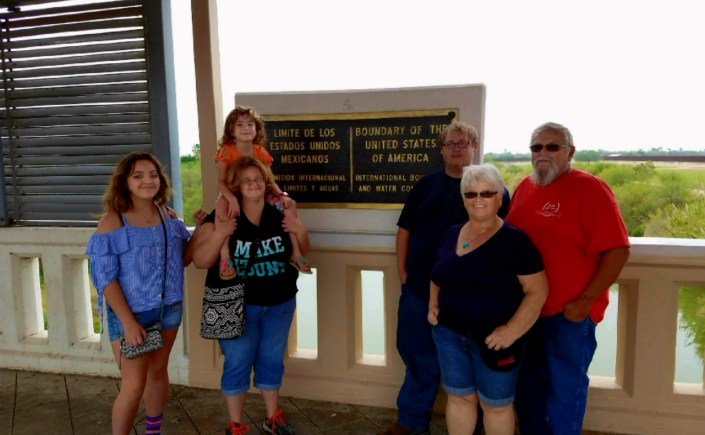 This was the first time any of the kids have been down.  Cameron and Cassidy, the grandkids were down 2 years ago, but this time they all planned on coming down for Christmas.  It was really nice to have them here.  They drove down in Tammy’s  Jeep.  I brought over our little table top tree to the trailer they stayed in.  I put it on the coffee table and decorated with some garland.  I also brought over one of our tomato cage Christmas trees and put in the screen porch.  We wanted it to look festive cause Santa was coming for Carly……She is only 5, of course she believes.   They left on Thursday and stopped in Arkansas at Tammy’s friends, Char, Joy and Pamela.  Then they continued straight through all the way down.  They stopped in Port Mansfield which is about an hour away on Saturday.  They wanted to see the Gulf.  Port Mansfield is right on the Gulf and is a good place to fish.  They bought a fishing license and did a little fishing. 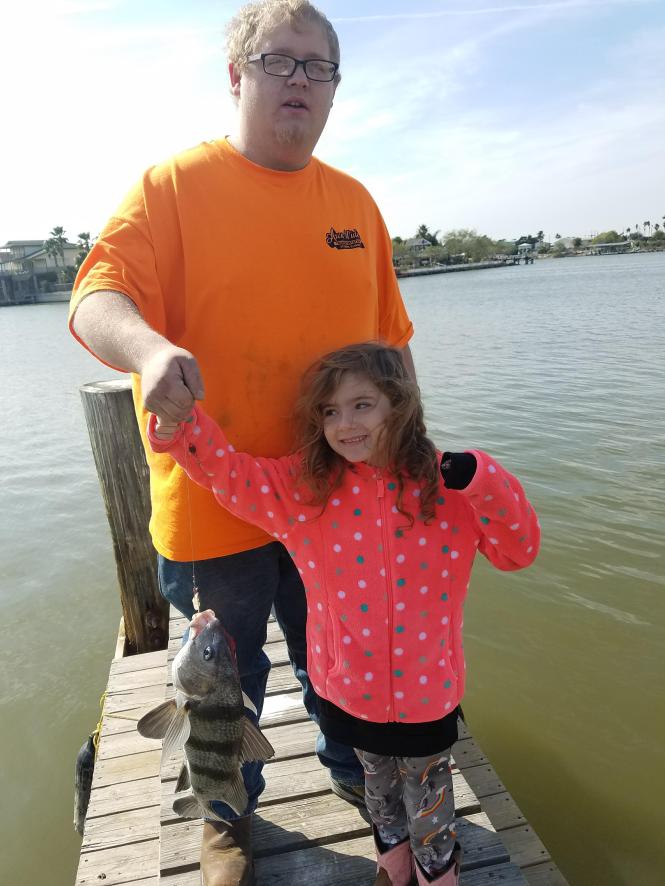 They caught a really cool fish in about a half hour.   Of course they had no choice but to throw it back.  In Port Mansfield their is a herd of deer that roam the town. 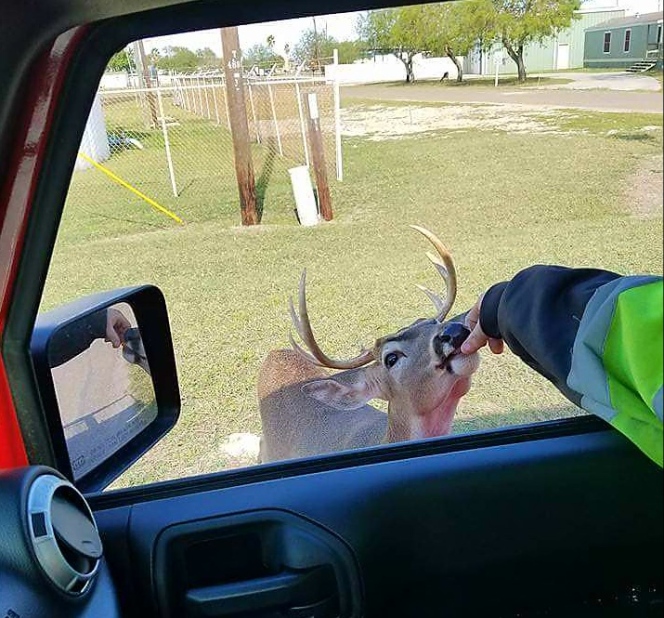 They come right up to the car and you can feed them.  They fed them corn curls….They finally arrived Saturday afternoon very tired.  The next day was Christmas Eve Day.  Tammy decided to take Carly over to the Hugh Ramsey Nature Preserve. 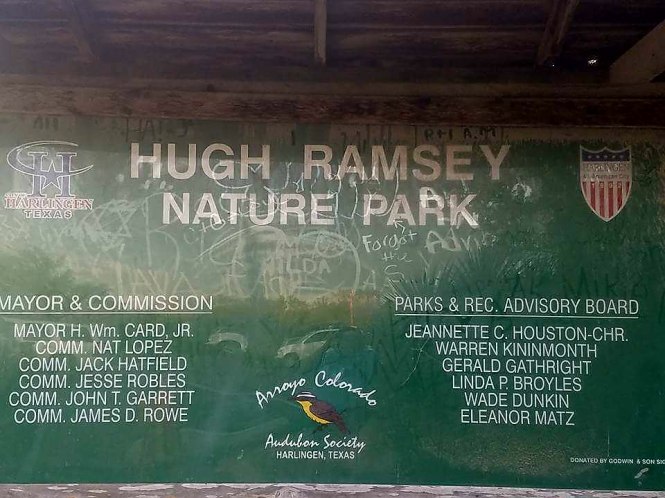 It is only a block away.   Every Friday they have guided nature walks or bird walks.  The paths take you all the way down to the Arroyo as they call it.  For us, we call it River….. 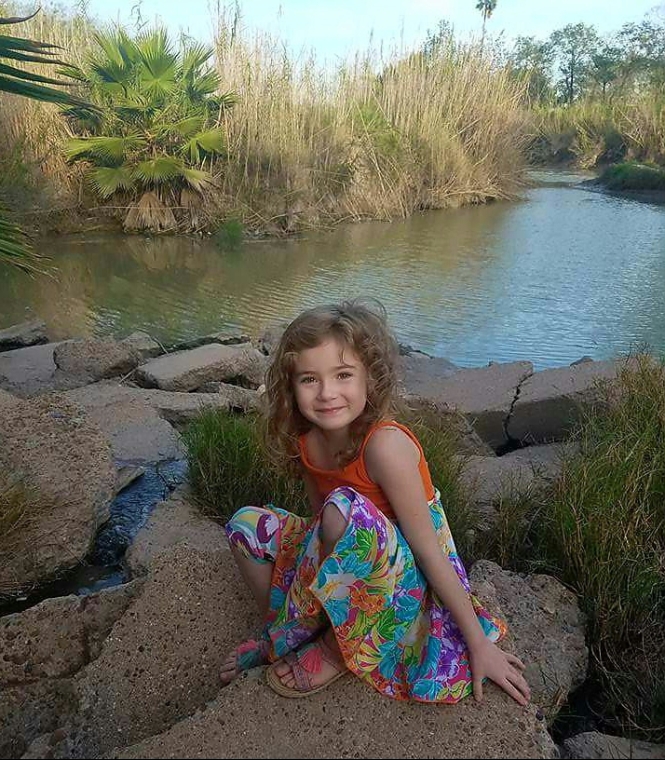 Its so full of beautiful cactus’s and beautiful trees.   This area is a major bird watching area.  Rio Grande Valley is on the major bird migration route.  Many of them come up from South America, and this is the first areas of land they come to.  They stop in this area and spend time resting and eating so they can eventually proceed north.  Their are so many bird watchers here in the area.  Many different Nature preserves for the birds and all the wildlife. 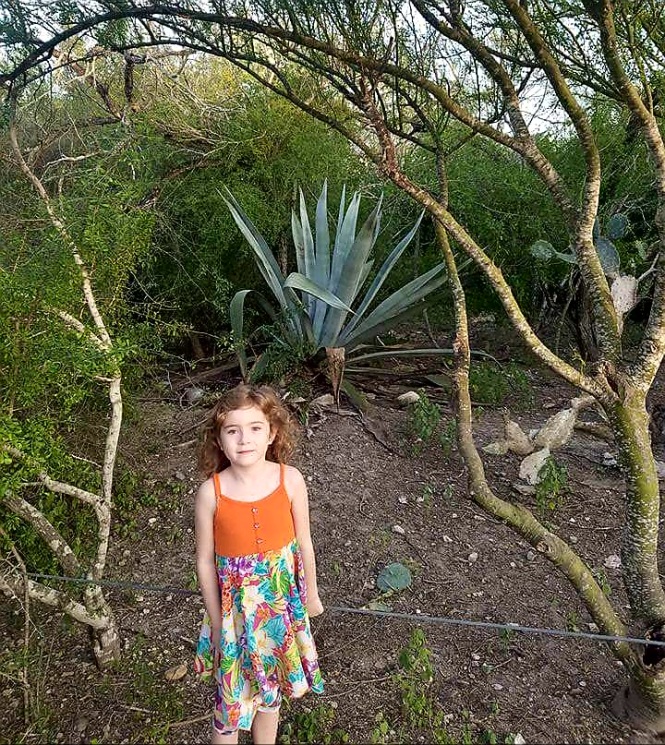 Its amazing that their is so much beauty right near our park.  All the different cactus’s and different textures of plants.  Since it was Christmas Eve, they held church services in the hall.  I went up around 5 after services were over and had them set up tables for Christmas Dinner the next day.  Then back home and it was time for supper……By that time they were all sitting around for a late Happy Hour…..It just happens when ever you want it…..lol…Even Cameron joined….. 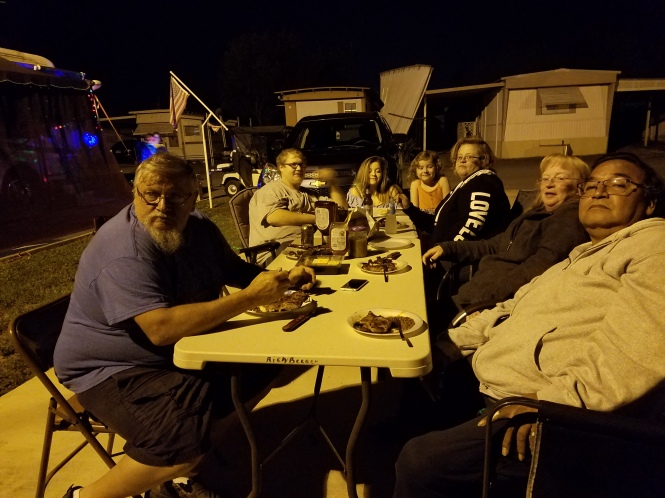 Rich fired up the grill and we cooked supper and set up 2 tables on the pad next to us that was still empty…..So this is Christmas Eve Texas Style…..No snow…..No Winter coats….No snow shovels…..we did have jackets on as it was getting a little chilly….But the day had been a beautiful day…..So Now it was time for bed for Carly……Santa was coming in the morning…… 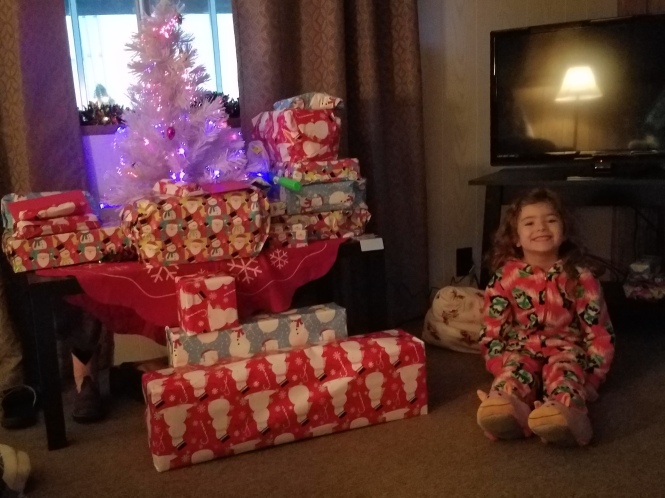 We went over at 7 in the morning.  Carly was so excited.  Santa managed to find her in Texas….. 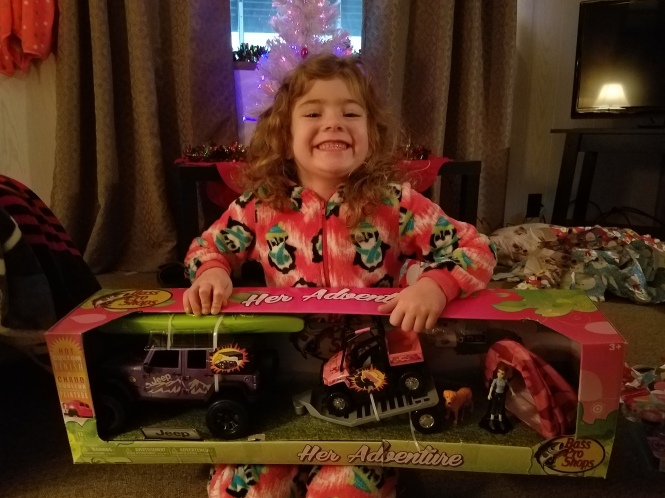 She got some cool toys….If your wondering about Cameron and Cassidy……they are here….lol…but neither one really likes their picture taken…..Cassidy is hooked up to her headphones and phone all the time and doesn’t like to do the things Carly does.  Typical Teen…..Cameron hangs around Grandpa…   After they opened presents, I went up to make sure the Volunteer cooks were doing ok with the hams.   Dinner was at 1pm.  They cooked 7 spiral hams for the residents.  Eveyone brought a dish to pass for our tables.  We also had a table decorating contest…. 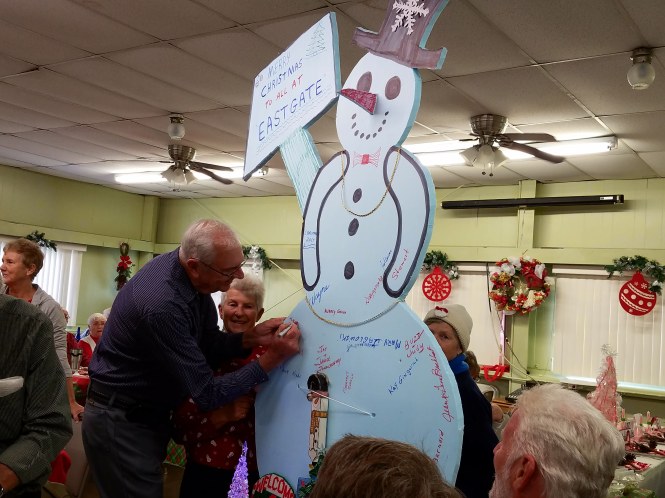 This was the winner. What an imagination.  This snowman was cut out of Styrofoam.  Then he had everyone Autograph it….He had it set at the end of the table and then took it down to eat. 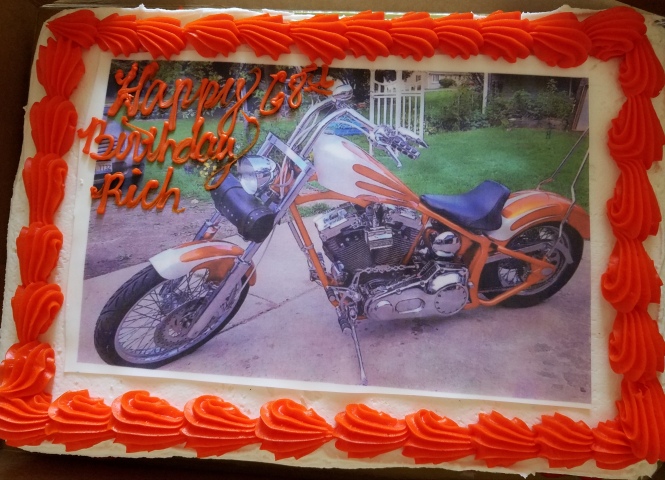 Now we all know what Christmas Day is….Rich’s Birthday….He had been wanting a Birthday Cake.   About a week before Glen and Kathy, our neighbors, took the picture of his bike down to the grocery store and ordered this cake…..We surprised him and brought it in…. 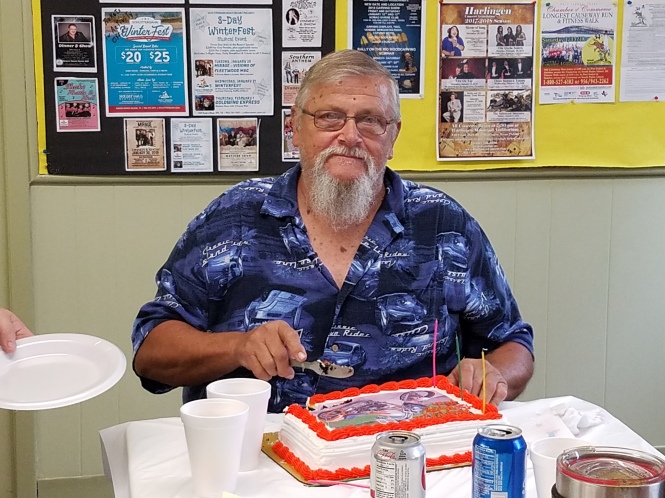 They did a beautiful job.  Rich is now…..’’68”……He is now older than me for 8 months….lol…One of the lady’s in the park played some Christmas Carols and then we cleaned up, did dishes, move tables back and all was done by 3pm…..The rest of the day was a lazy day (another Happy Hour).  So now our plans were, leave in the morning and head for Progresso Mexico.  The weather was still ok, but the forecast wasn’t looking good for the rest of the week.  Tammy had a hotel rented on South Padre Island for the rest of the week.  We also booked a room for 3 days.  So plans were to pack up in the morning and head to Mexico, spend the day and then down to SPI and check in.   We finally left the park by around 11.  We drove two cars to Progresso.  Its only about a half hour or a little more.  We parked on the American side and walked over. 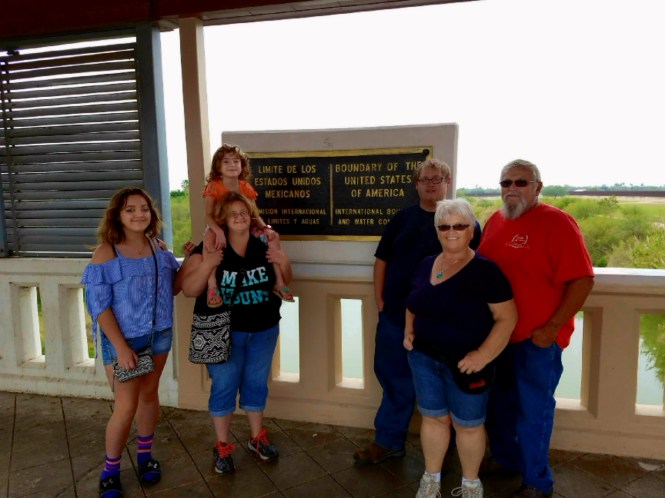 This is the middle of the bridge.  Underneath is the Rio Grande River, which is the dividing line between the US and Mexico. 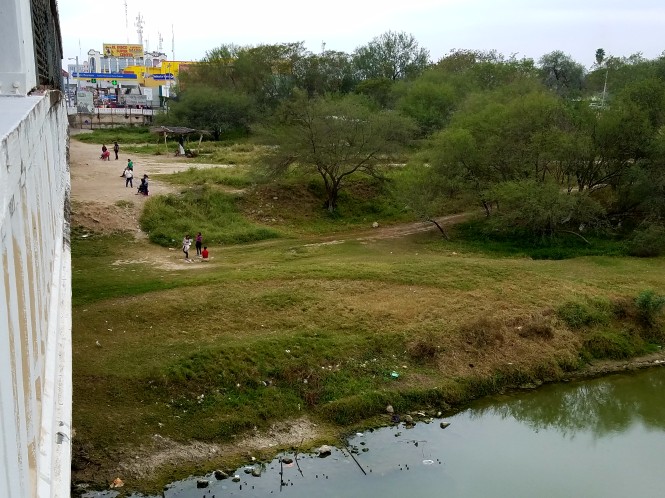 It really isn’t that far to walk.  As soon as you walk off the bridge on the other side, the town of Progresso begins.  When you look over the side, you can see all the women and children begging for money, pennies or quarters.  When you get to the other side where the ground meets the bridge, they are shoving their baseball hats threw the holes asking for money. 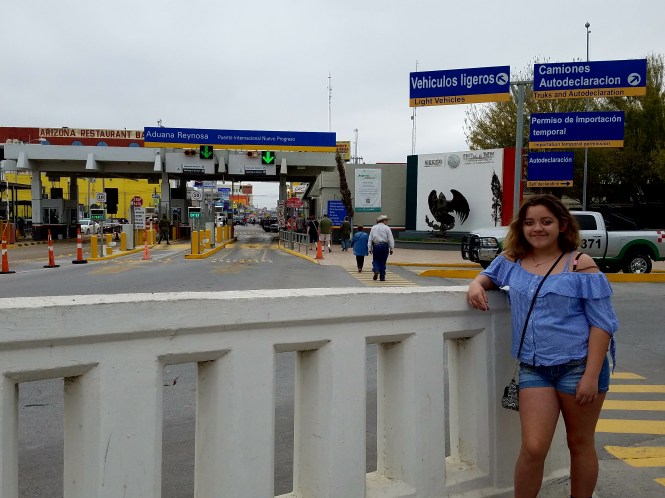 The kids all were really excited about going over.  Tammy had gotten her passports in the mail, just weeks earlier.   This picture of Cassidy is right at the end of the bridge.  You can see the Mexican government security gates that you have to go through when driving.  We do drive over also sometimes.  They don’t bother you going in to Mexico, but coming back into the US on the US side,  you of course have to show your passports and they ask questions about what you are bring back.  They can be very thorough.  Many times we’ve seen them pull a car over and pull everything out to search.  They use mirrors, cameras and dogs. 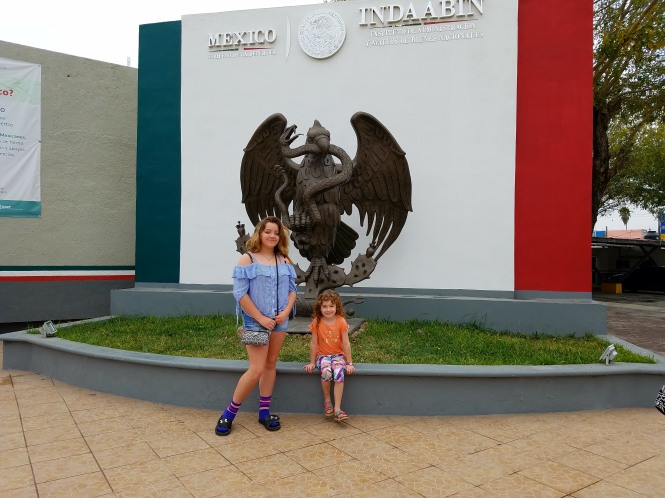 Here is a favorite place to take a photo.  This is what you see as you get ready to go through their gates.  So the adventure began.  The kids kept walking past all the sidewalk vendors.  We kept a tight hold on Carly.  Everyone of course was approaching us with their dental cards and everything else for business.  We finally went in a little shop area.  This guy spray paints pictures.  He uses only aerosol cans and little pieces of cardboard. 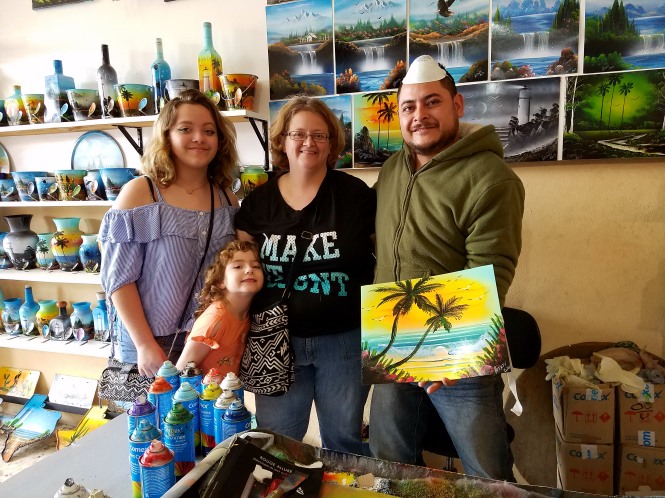 He painted this picture while we watched.   He only charged $15.  Great souvenir.   Our next stop was a restaurant.  We went to Arturo’s.  Its one of our favorites to eat at.  Very clean and nice. 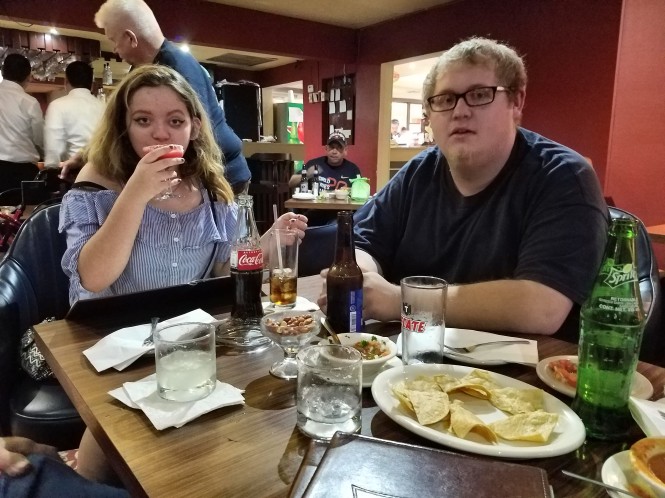 We ordered off the menu and had some drinks.  They don’t care about ages so Cameron had beer or two. … lol. … Cassidy tried her moms Margarita.   Finally we went on.  We looked at the street vendors and the shops.  We went to our favorite Pharmacy and I introduced Tammy to Jasmine,  who also works with the Dentist in the adjoining office.  They are the ones who made my upper plate.  Her sister and husband are the Dentists, and Jasmine is the interpreter.  I believe she also runs the Pharmacy.  Next after a few purchases, we went to their department stores….. 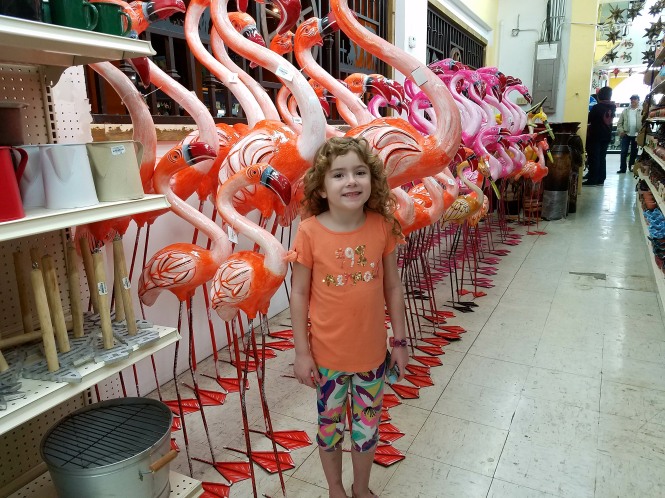 well not really but they are full of pills, souvenir’s, piñata, pots, candy, clothes and anything you can think of. 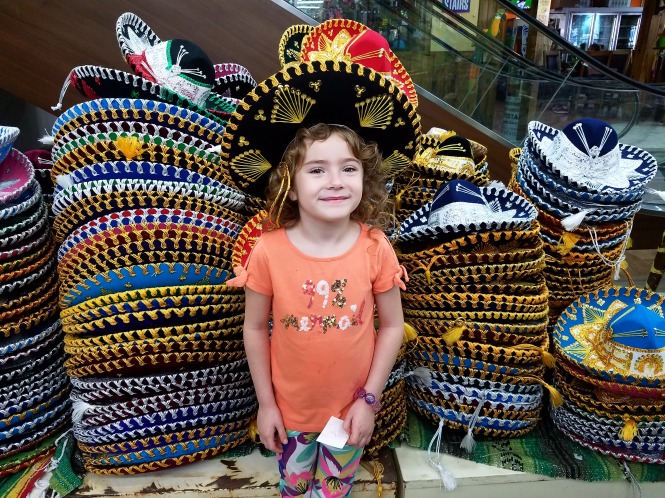 Their is so much traditional Mexican clothing and hats for sale.  Cassidy found some cute shoes and Carly found a matching dress for her and her doll. 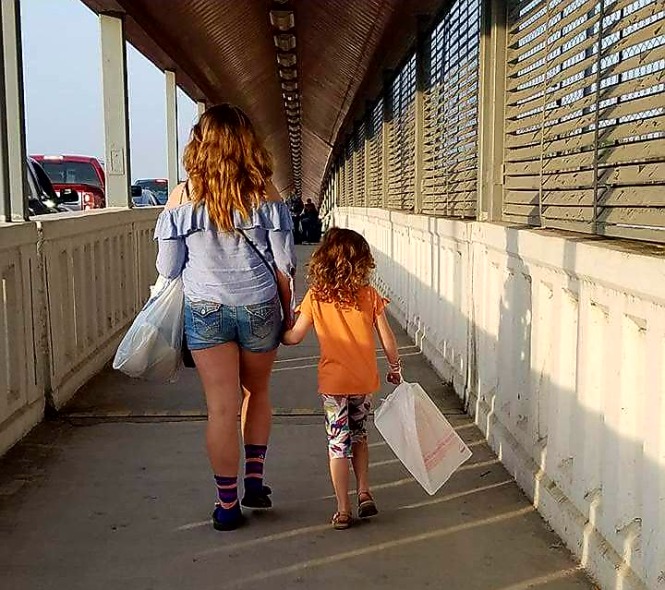 Finally it was time to head back over to the US.  Progresso is the only city that is advised to crossover over.  All the others they say to stay out of.  Matamoros by Brownsville use to be a favorite.  They say the Cartel is strong in these border towns and its unsafe.  In Progresso we feel really safe.  As long as you leave late afternoon before dusk, your fine.  So many people go over for dental work and pharmacy.  Some even come to Southern Texas just to go across and get dental work done.  It is a lot of fun their.  Theirs many street bars and singing entertainment all the time.  But of course they are always asking for money and your always approached on the street to buy something from even the smallest of kids.  They learn as soon as they walk, how to beg.  The Winter Texans are a Major source for their income, so they do seem to watch out for us.  They need our business.  Finally after a walk over the bridge and through customs, we were back in our parking lot.  We showed our passports and today was an easy day.  They didn’t even ask what was in our sacks.  I even think I detected a smile…..Now that’s Unusual….

So I got in with the girls and Cameron rode with Grandpa and off to South Padre Island to check into our Hotel………..The Next Chapter…..lol…