Last year, while we were here in Southern Texas, our 4 door frig that runs on propane or electric started having problems.  It was toward the end of our stay here.  We called an RV repair person, recommended by our friend.  The electronic board was going out or the “mother board”.  It would take a week or 2 to order and have it come in, so he offered to let us use a used one that he had and we would replace it this year.  This summer, the door broke on the hinge.  It was on the frig side, not the door.  So we decided to just replace the whole fridge with a regular residential frig.  Now keep in mind this frig has to go in and out the door or through a window.  To come in the door it had to be under 29″ wide, with out the door, and the height could be no taller than 64″.  The frig sits on top of the furnace. Sounds easy right?….lol…

So several Saturdays ago, we spent the day looking for a nice black frig that would fit.  We went to Conns, here in town and checked. Found one fairly reasonable.  We decided to ride down to Brownsville also to check out Best Buy.  They had one also but not deliverable for several weeks.  We went back to Conns.  Now we were set to order it, but they were going to charge us $75 delivery charge as it was coming from McAllen.  Even if they dropped it at the store, still the charge.   That just set the price over the one in Brownsville.  So we were discouraged, and home we went.  Then the light went on….HOME DEPOT…..Now we knew that.   lol….We went out and found one and ordered it.  Now how hard was that.  One week and it would be delivered FREE…..and less money than the others.  So the following week Rich prepared the frig for take out.  Several days before delivery, Rich took out all the food and pulled our frig out.  We have another frig outside.   Now their it sat in the Living room…. lol…It was almost to big to go out the door. So now for several days it sat their.  He put his recliner in the middle of the floor, so he could see TV.  lol..

Finally the nite before, Rich took off the screen and part of the main door assembly and we Pushed…..Pushed….Pulled….Pulled….Turn it a fraction….Pick it up, Let it down….and finally SHOVE IT OUT….It made it out the door.  We did tear a piece of the dash, but it was out.  We started measuring and got out the paper work….GUESS WHAT…It was ordered in white….grrrrrrrrr….we wanted black.  We went back out to Home Depot.  And YES we were right….It was coming in white.   They told us that we had to refuse the delivery, and wait a day so it was returned to the warehouse.  Then come in and reorder.  So that is what we did.  We reordered and had to wait another week for delivery.  All this time now, we had no frig inside.  Do you know how it feels to get up in the morning and not have anything cold to drink?…Everything was outside.  Gees, you have to be dressed decent, just to go out the door.  We have neighbors about 10 feet away.   But we survived .

In the meantime we went to “Winterfest” at Schlitterbahn Water Park, on South Padre Island.  It is an all day music festival with different entertainers every 45 min.

They were all the entertainers that come to the Rio Grande Valley for the winter entertainment at all the parks. They usually have a circuit and perform a different park almost every nite.  Our entertainment in Eastgate , is on Friday nite.  Many come from Branson Mo.  Some are closer.  Many are from RFD TV. 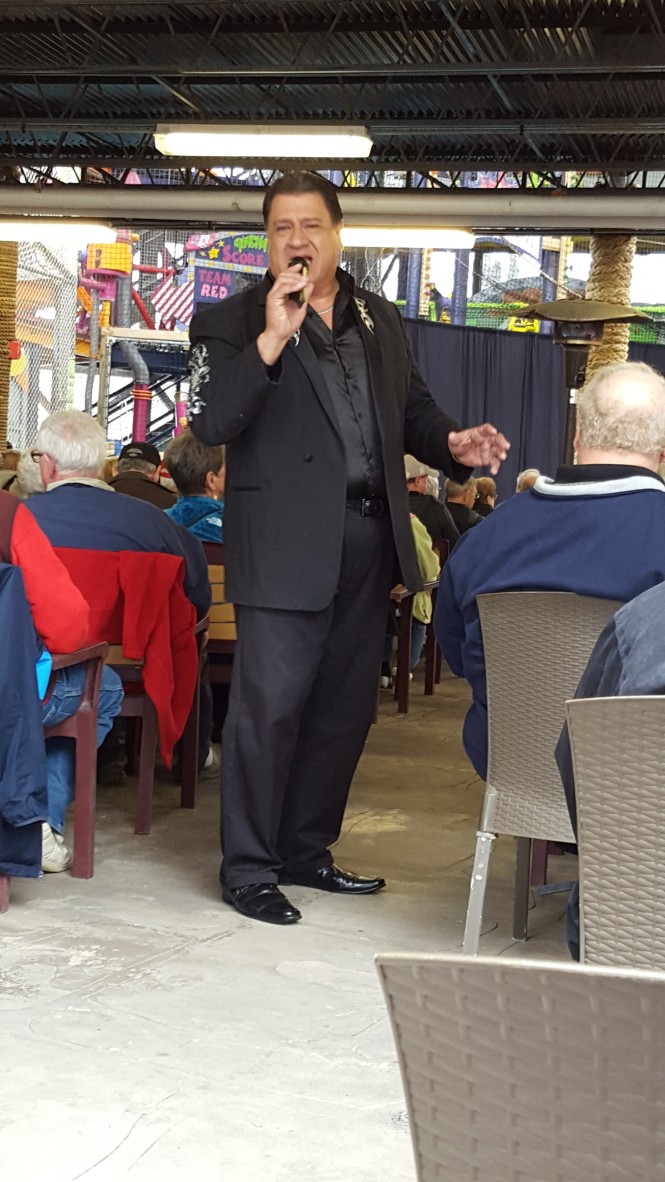 Mario performed, early afternoon.  We have seen him several times.  He is from Branson.

Another GREAT singer is John Sager, Also from Branson.  He was a wonderful singer and full of energy.  He is scheduled to come to our park next season.  Also a guy named Greg ?…..Already forgot. 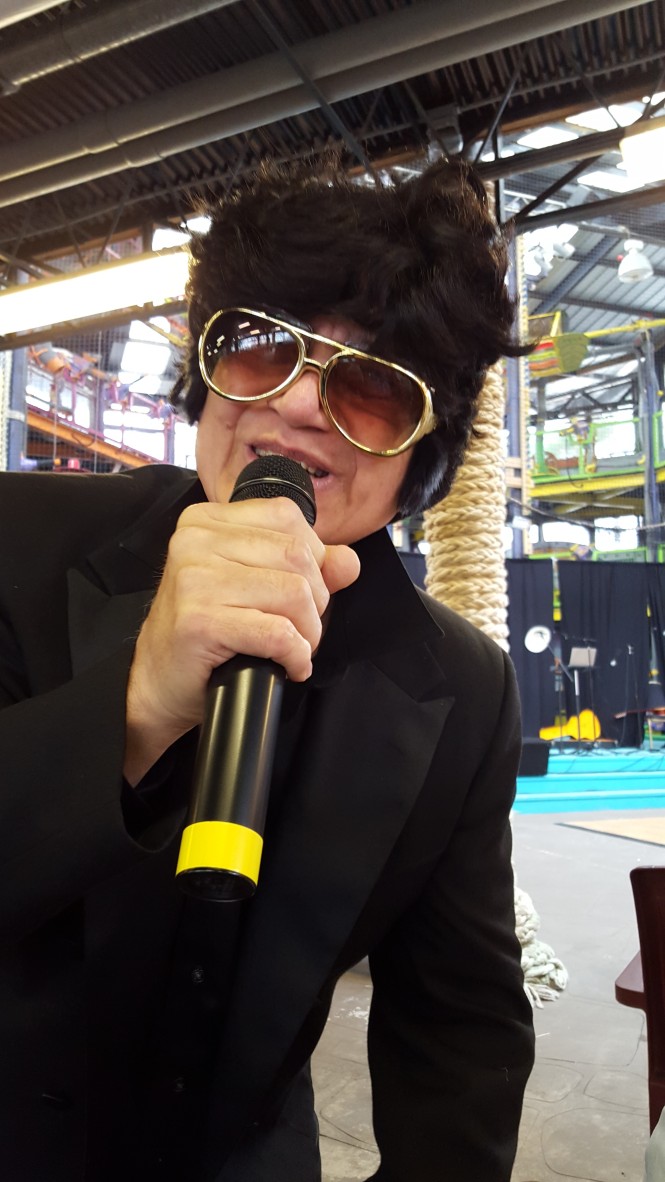 He used to sing at the Play Boy Club years ago.  He was an Elvis impersonator and some others.  Once his voice was warmed up, he could really belt out a song.  Very Powerful.  The very last performance was the local High School.

They had a Mariachi Band.  These kids were so talented.  They sang and played their traditional music.  It was Awesome.  It was a fun day, but it was cold.  They moved it inside by the indoor water park at Schlitterbahn, but it was still a very chilly day. 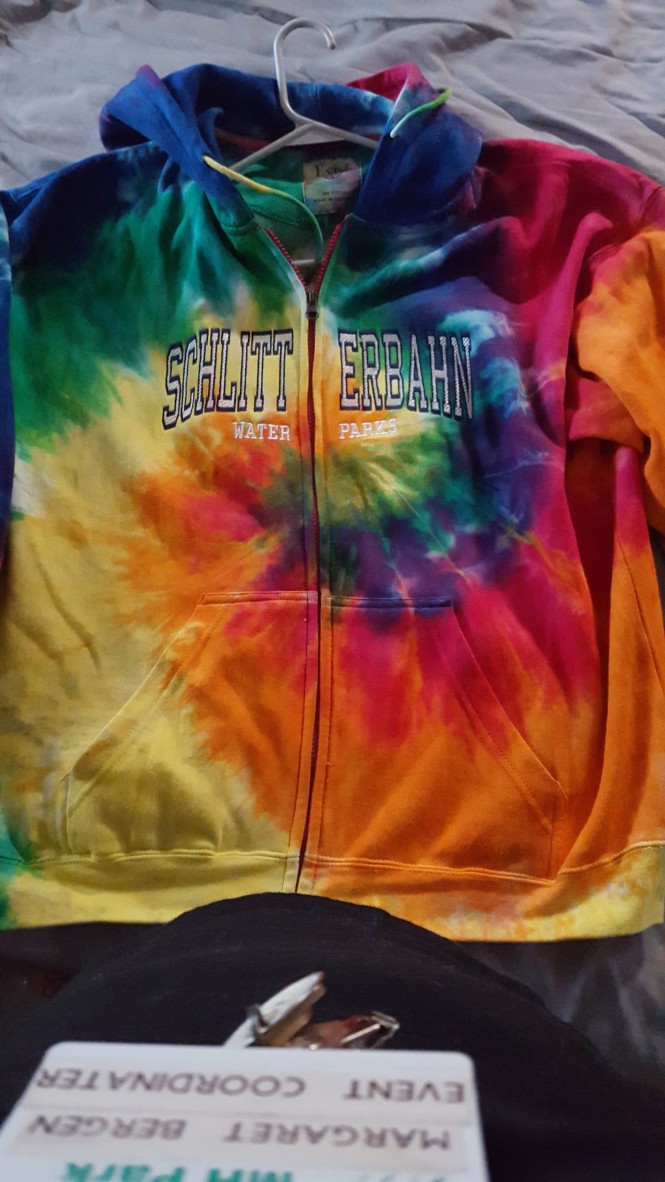 Several visors for $2.50 each.  Another pull over sweatshirt and Rich bought sweatpants and t-shirt, all for $10 each…..Great Day for bargains.  The best part was, our tickets were complimentary, as I was given some to sell for the park, therefore mine were free.   Some of the perks of this job.

Now all this week Rich has been working on the box that the frig would sit in.  It was now to wide for the new frig, but would just barely fit the height.  He took the side and made a narrow little pantry. 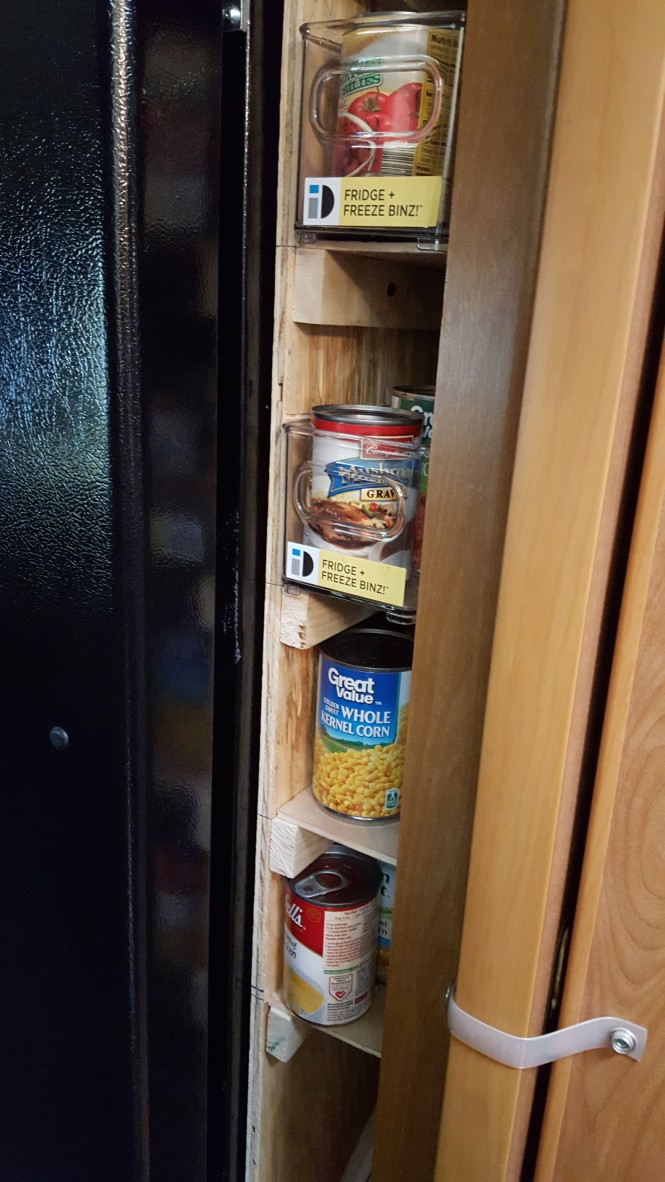 He made shelves top to bottom and we have clear plastic containers that are wide enough for cans.  Each one will slide out so we can see what is in the container.  Now he just has to make a door for it.  It will solve our can storage problem of them all jumbled together under the sink.  Finally the big day came.  We got the call.  The frig was on the way.  I had to go to the office, but that’s ok.  I really didn’t want to be their.   I knew it would be a very tight fit, and I wouldn’t be any help.  I just knew their would be a few choice words said….lol….So our friend Ken came over.  They took off the screen door again, and after some other adjustments they began.  Rich said it was an extremely tight fit through to door.  They pushed…pulled….brought it back out twice.  They problem is, as the frig goes through the door, the dash comes out and you have to turn it to clear the dash.  Finally after time, and some more small rips in the dash and a dent in the wood, it was in…..Now it had to fit in the new opening….Bingo….Fit like a Glove….Rich had to do some minor adjustments to the ceiling light, as the freezer door hit it, but it all worked out….I came home that day, Hoping it was in.   I was worried that we might still have to take out a window to take it through…..I looked outside…..Nothing….No sign of the frig, or the box.    Good Deal….It was In…and …It looks Marvelous, and

IT SURE IS NICE HAVING DRINKS AND FOOD INSIDE AGAIN…..THE SIMPLE PLEASURES OF LIFE….LOL…NOW TO CLEAN UP THE MESS…..