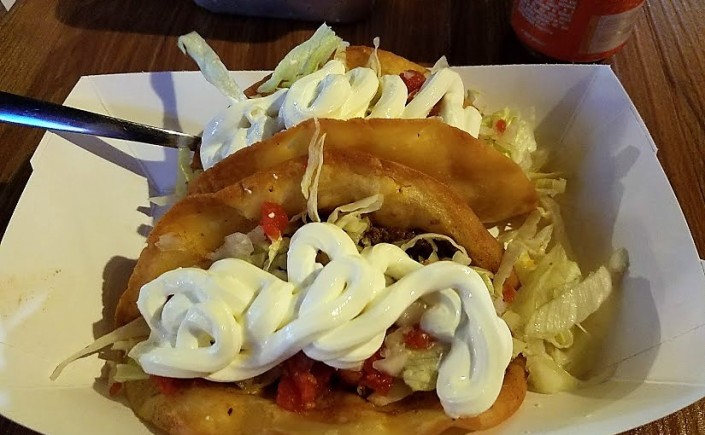 We are back home for a short time.  We’ll be here around 3 weeks total.  Its good to see the kids again.  We left Harlingen on Saturday afternoon and arrived Monday afternoon.  The goal was to make it to Scott and Brandy’s  bar for tacos.  They serve them only on Mondays 5-7. 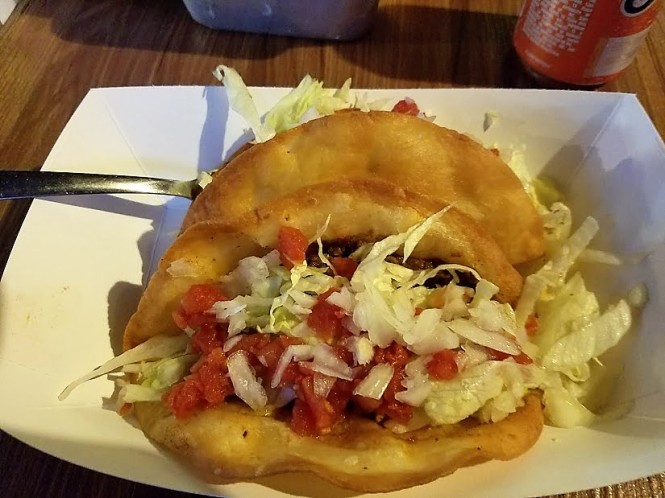 They are deep fried, something you can’t get in Texas.  Must be a northern thing.  Brandy puts in the meat filling, inserts toothpick.  Drop them in the fryer and immetiately open and put in lettuce, onions and tomatoes after frying…..mmmmm…..Saturday morning I had an employees meeting before we left.  I work at the Cinemark 10, 2 days a week on the weekends in the box office.  I, of course am the oldest.  Most are all kids or young adults.  It was rather interesting.  The General Manager of the theater held the meeting.  The purpose of course is to update all employees on new programs coming up for the summer, as well as safety issues, fire drill procedures, and many at risk situations.  But the think I find most interesting is the general manager is so good with these kids.  He is firm with rules, but he also builds them up, trying to get them to strive for the very best in life.  He demands respect and yet have fun at the same time.  One of the managers, Miss Ramos, has been taking the steps to climb the ladder in the company.  She has just taken a test and achieved a fabulous score.  The General Manager announced that she was 4th in the nation and is now titled “Assistant General Manager”  Everyone is called Miss or Mr.  In fact, this is something I have noticed here in the Rio Grande Valley.  Their is respect everywhere from little kids to Seniors.  You can be in a grocery store or on the phone, and everyone says, “Thank You Maam”……It is something that is taught from childhood on and still continues.   As soon as I came back home we finished packing. 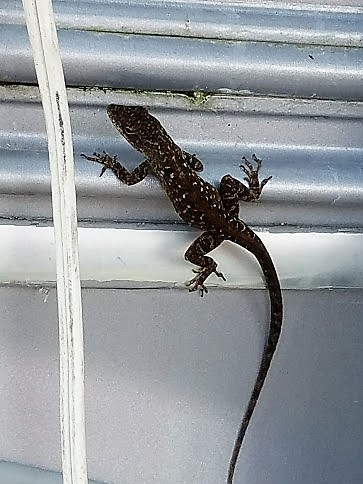 This little guy was hanging around on the awning.  There are zillions of these everywhere.  Kinda cute……It was so hot……Sweat was just pouring off Rich.   Finally we took off and had a rather uneventful trip home……but that’s good… 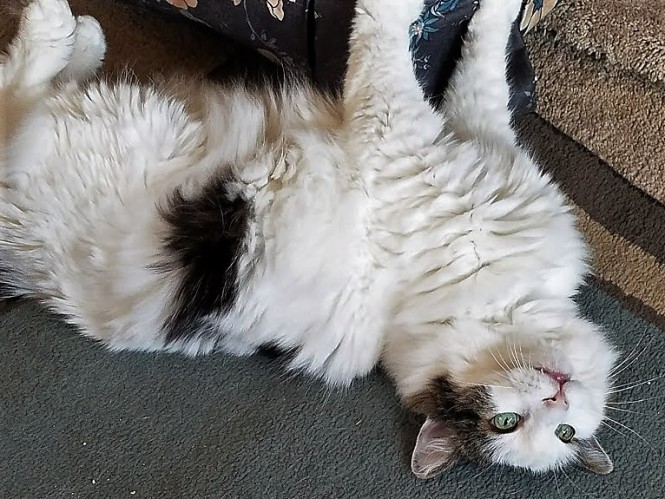 Kitty enjoyed the ride as usual, sleeping most of the time.  He would of course also sit on his foot stool by his dad and paw at him.  He always wants Rich to pet him while driving. 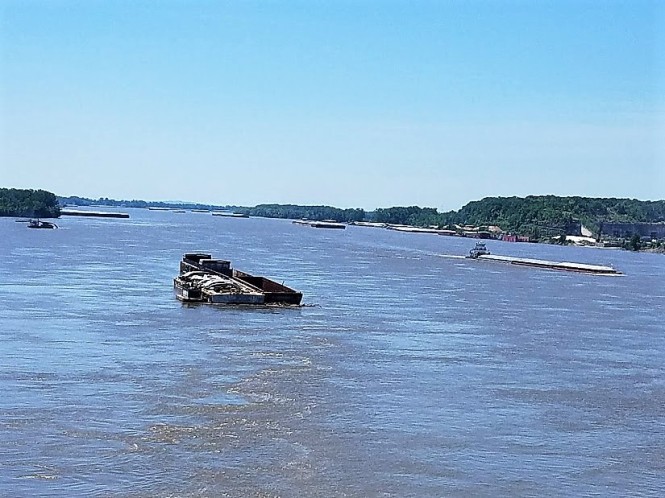 Finally crossing the Mississippi we made it into Illinois.  We seen some floods coming across Arkansas.  They were really hit bad on the White River.  The Mississippi was up but nothing out of the ordinary.  Its been so much worse. 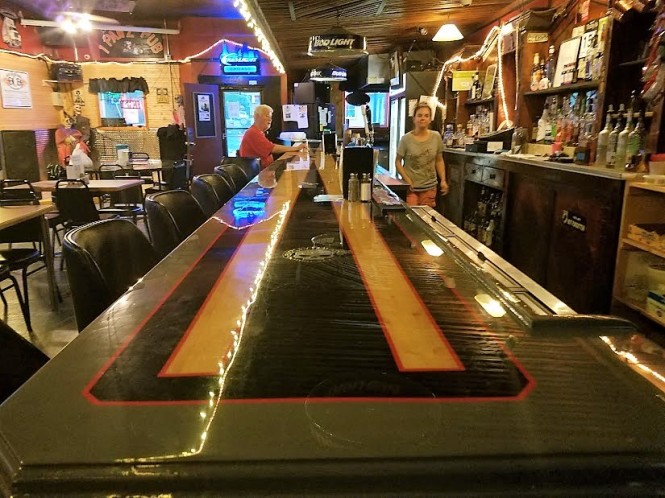 We arrived in McNabb and parked at “One Pawz Pub”.  Brandy was working,  Scott showed up about a half hour later, from driving truck.  This was the first time we had seen the new progress on the bar.  Scott reconstructed a new bar and put stripe designs in it and covered it with epoxy.  This is not a good picture but it is beautiful. 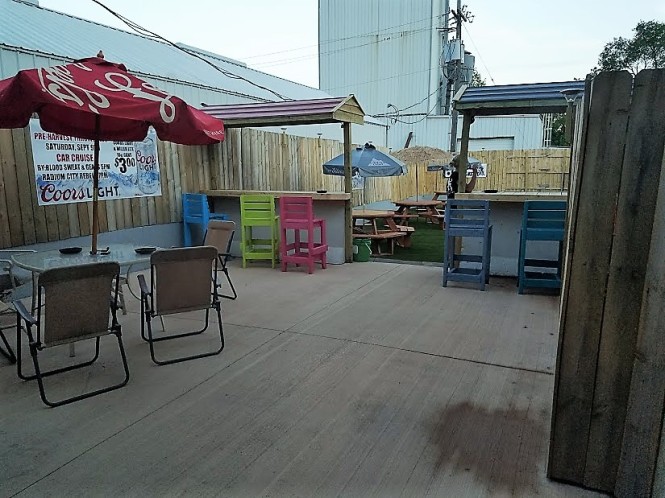 Patio area….it was getting dark

He has also finished his patio out back.  He made all his own bars and bar stools and painted them different bright colors.  He also made 3 octagon picnic tables and put down grass turf.  They have a Harley Davidson Bag game in the area you can’t see.  He is striving to gain a lot of bikers this summer on their poker runs. 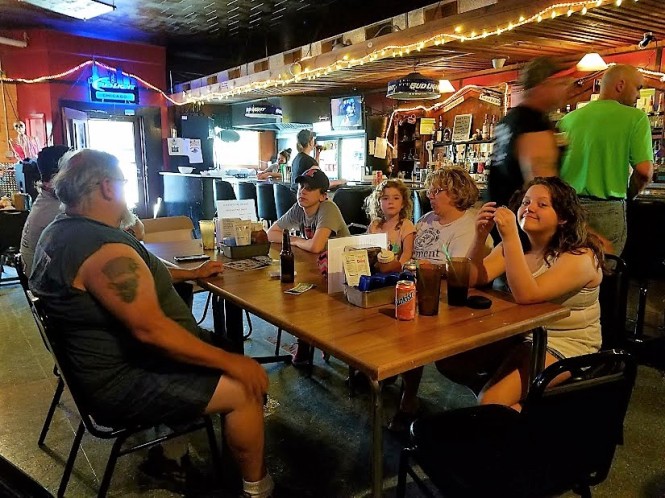 Tammy, Cassidy and Carly came for Tacos.  Also her boyfriend Bryan and son.  Ed, Tinas Husband showed up with Austin.  Tina was at a softball game with Miley.  Finally Cameron came in.  He was working…….”What a Nice Sound”…..lol….This past year, Cameron has made “HUGE STEPS” in his life.  He accomplished his GED, then went to Truck Driving School, obtained his CDL, and now has a seasonal job at AG Service.  He drives the chemicals out to the fields for the farmers as they plant.  He loves it.  He also has a truck driving job coming up after the season is over.  It will be a roller coaster for him as he is only going to be 19 in June.  Lots of companies can’t or don’t want to hire him because of insurance.  When he is 21 it will get better…..Just have to stay positive….Finally Connie, Richs youngest sister came and Brian.  We had a nice visit eating Tacos.  Finally drove to the house a block away before dark, parked and settled in. 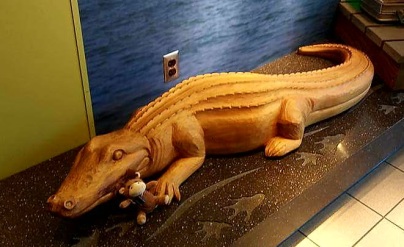 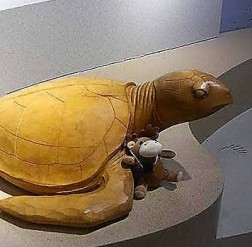 Now time for a “Randy update”.  Randy has been in New Orleans and Galveston having a Grand time.  He went to a museum to check out and learn about alligators and turtles. 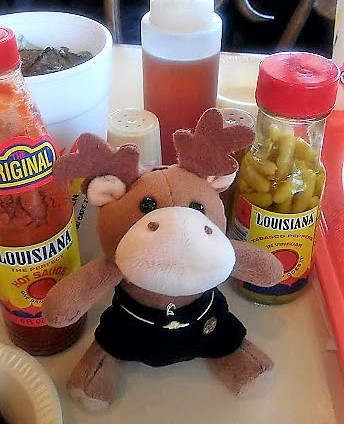 He’s been to many resturants checking out the hot sauces and peppers…..lol 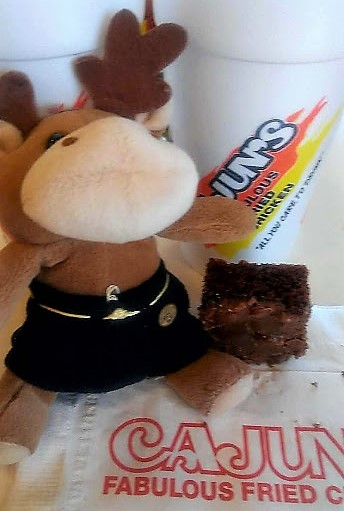 But he decided to eat Brownies instead…..Guess he knew it would tear up his stomach. 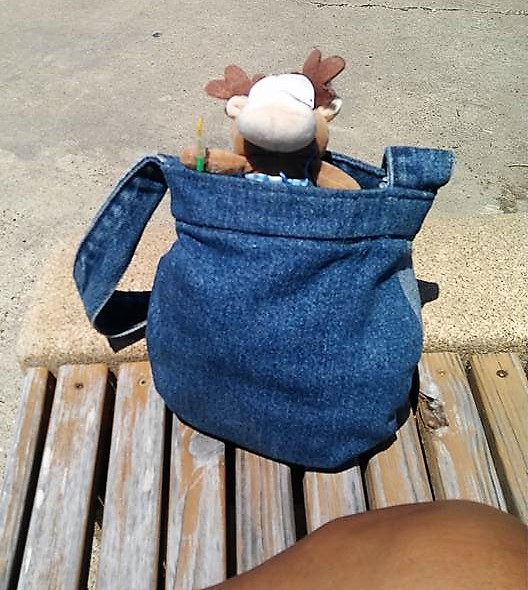 So now Randy and his parents are all packed up.  They are heading on their way to Maryland.  Their having such a good time seeing the sites….

Cant wait till we see where Randy’s Adventures take him next….. 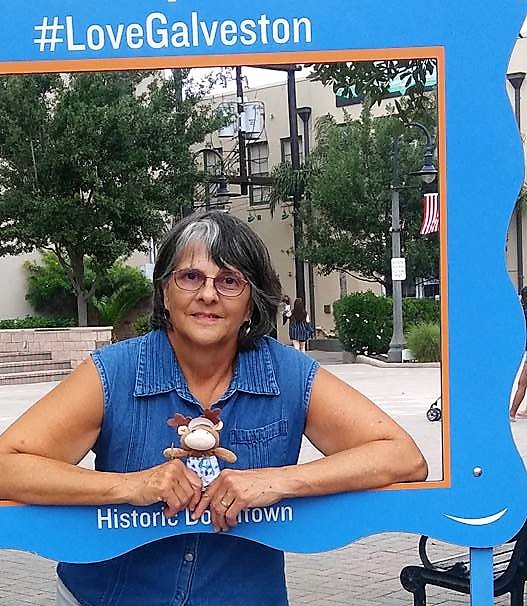 Randy and his Mom in Galveston La.

2 thoughts on “Back Home In Illinois”

We are Winter Texans in the Rio Grande Valley